In a time where the word “Nazi” is seeing its resurgence like never before in a turbulent political climate, there is something to be said for the way that the Wolfenstein series has managed to dish out the horrors of war in a way that is thoughtful, harrowing, and hilarious at the same time. 2014’s Wolfenstein: The New Order provided players with an unexpectedly funny and bizarre take on an alternate American timeline if the Nazis won the war, and now Wolfenstein II: The New Colossus looks to be upping the ante even further when it comes to pushing the boundaries between historical fantasy and bleak reality.

During a preview event in New York City with publisher Bethesda Softworks, DualShockers had the opportunity to check out a new demo for Wolfenstein II: The New Colossus, which is getting primed for its release this fall on consoles and PC (and for the Nintendo Switch sometime early next year). We’ve gotten our hands on The New Colossus previously at E3 2017 and at a preview event this summer, but the latest build of the game that we demoed showed that there are plenty of other tricks up B.J. Blazkowicz’s sleeves when it comes to disposing of Nazis, both human and robotic.

“There are plenty of other tricks up B.J. Blazkowicz’s sleeves when it comes to disposing of Nazis, both human and robotic.”

Taking place after the events of The New Order, the latest demo of The New Colossus that we had hands-on time with threw B.J. Blazkowics into a war-torn area of New Orleans under the Nazi regime, after a cutscene highlighted B.J.’s efforts to start a Second American Revolution with his band of companions helping in the effort. Where our prior previews highlighted more story-centric elements of the game’s campaign, the demo we played put gameplay into high-gear by providing us access to many of the game’s roster of weapons and upgrades, though many of which players wouldn’t have access to by this point in the game.

Aside from the large roster of weapons and equipment at our disposal, the most notable elements of Wolfenstein II: The New Colossus were the difficulty and the incredibly fast-paced nature of the shootouts. Though New Order was by no means an “easy” game, The New Colossus definitely seems to be ratcheting up the difficulty even more, as even on the game’s standard difficulty setting I found myself struggling to get through some segments of the demo thanks to a huge variety of enemies around every corner. Death comes quickly in The New Colossus, and you’ll have to be on your toes if you want to avoid a Nazi shotgun to the face.

“Death comes quickly in The New Colossus, and you’ll have to be on your toes if you want to avoid a Nazi shotgun to the face.”

Luckily, B.J. has plenty of tools at his disposal for taking out Nazis, and The New Colossus makes it clear that how you choose to take down the Nazi regime lays in your hands. While the game will (like New Order) offer a fairly equal blend of stealth and balls-to-the-wall action, the situations we found ourselves in during the demo pretty much forced into balls-to-the-wall action, but B.J. comes prepared with plenty of heat and new tricks at the players’ disposal.

The New Colossus comes packed with firepower for players to utilize against the Nazis, such as the obligatory shotguns and assault rifles, but our demo also featured some unique weapons for players to choose. Specifically, the two weapons in question were the Dieselkraftwerk sticky grenade launcher and the Laserkraftwerk blaster, which a Bethesda Softworks representative at the event mentioned is chosen by the player depending on a key decision that played out at the beginning of The New Order, and affects which weapon the player will come packing in the sequel.

But aside from the glee that The New Colossus provides in letting players dual wield shotguns or throw a hatchet into a Nazi’s face, one of the more intriguing new additions that was demoed for us were the use of new “contraptions” that B.J. has to use both in combat and in exploration. Each of the “contraptions” provides B.J. with a special new ability or power that he can utilize, which normally will be provided to players that decide to go down a specific type of playstyle for B.J. (for our demo, we had access to all three). 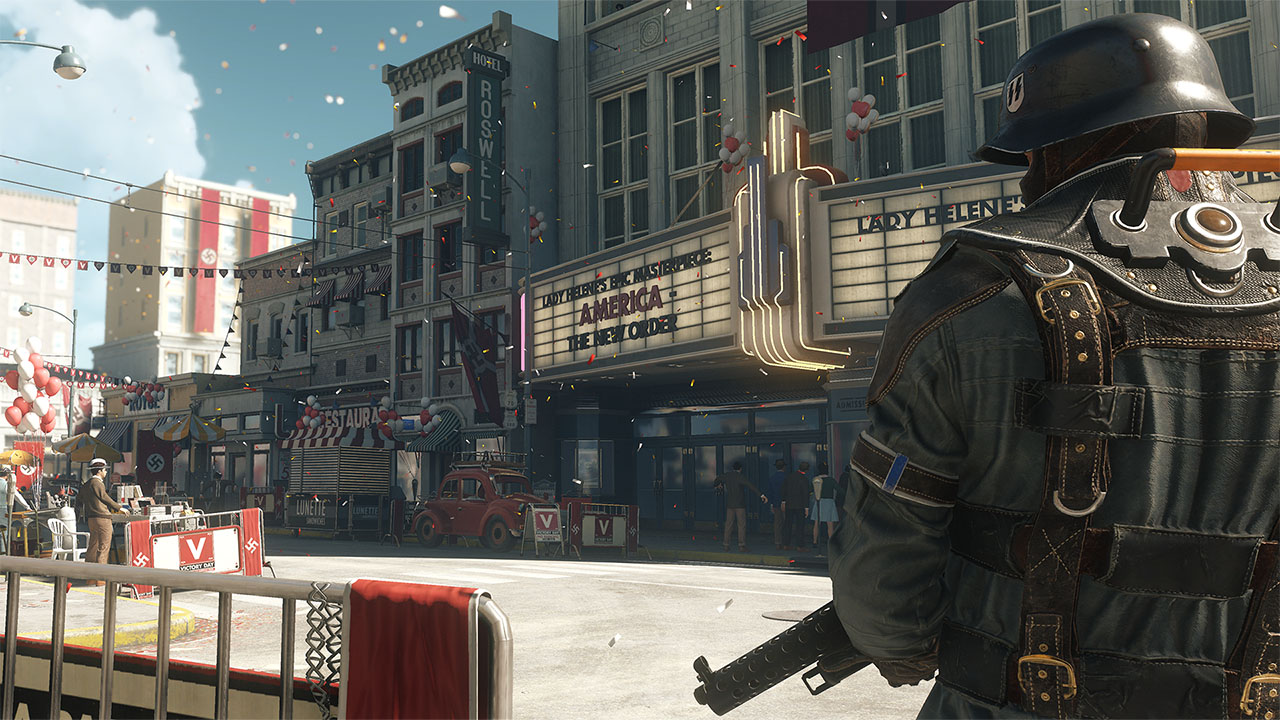 “It’s definitely clear that The New Order fans have a lot to look forward to in Wolfenstein II: The New Colossus.”

The first of these provided B.J. with a set of “battle stilts,” which (essentially) let B.J. extend above cover or reach up to high places to take out enemies, or reach areas he couldn’t from ground level. The “Ram Shackles” gear allows B.J. to bust through cracked concrete walls or heavy doors for a surprise attack against unsuspecting Nazis on the other side. Finally, the Constrictor Harness gives sneaky players a key advantage that literally constricts B.J.’s body into tiny crevices or entries for a stealth attack.

Given the already ludicrous premise that defines Wolfenstein, the contraption abilities added fun and inventive new ways to take out Nazis that fit perfectly with the outlandish setting of Wolfenstein II: The New Colossus. But more importantly, they emphasized that The New Colossus (mostly) feels more expanded and willing to let players take on encounters in however they see fit. While the game very much follows the linear structure of The New Order, the environments and their openness allowed me to try out numerous different ways of taking on encounters against enemies, whether I went for a stealthy approach or went in guns blazing on the battle stilts like a machine-gun toting, Nazi-killing giraffe. 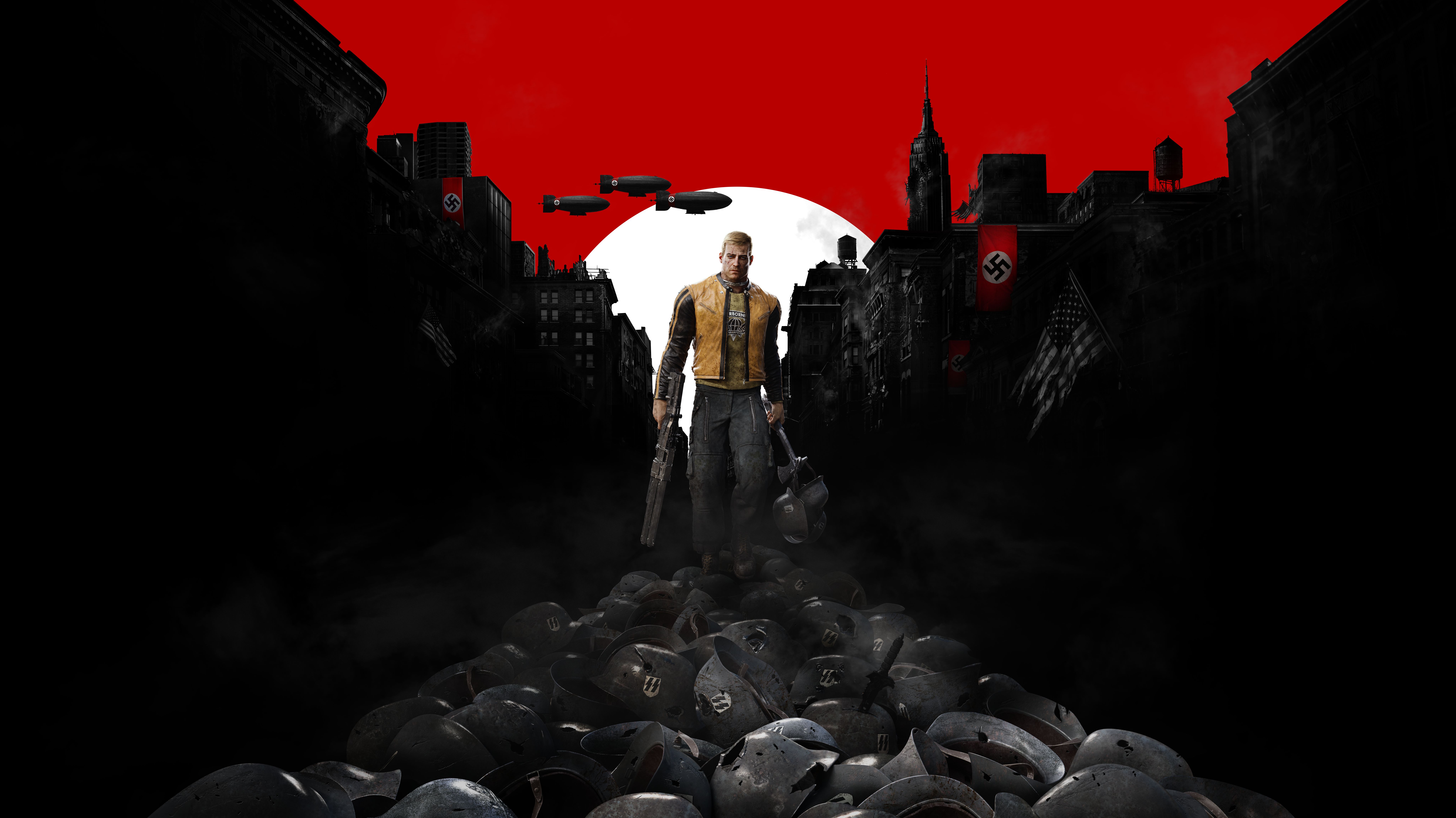 “Wolfenstein II: The New Colossus is fast-paced and killed me more times than I could imagine, yet I’m hungry for more.”

While our demo only showed about a one hour slice of what’s in store for MachineGames’ next title, it’s definitely clear that The New Order fans have a lot to look forward to in Wolfenstein II: The New Colossus. Aside from its excellent (and challenging) shooting gameplay that harkens back to the days of the original Wolfenstein and other classic first-person shooters, the game’s dark humor was prevalent throughout the entire experience and added much to rich world that MachineGames has established in its Nazi-run America, one which perhaps comes all too close to the world we’re in nowadays. Mixing in elements of grindhouse films and the works of Quentin Tarantino, Wolfenstein II: The New Colossus is fast-paced and killed me more times than I could imagine, yet I’m hungry for more.

Wolfenstein II: The New Colossus will release for PS4, Xbox One, and PC on October 27th, 2017, followed by a release for the Nintendo Switch in early 2018.

For more on Wolfenstein II, stay tuned for our upcoming gameplay footage showing new areas, enemies, and more from the game, along with our video mini-preview sharing DualShockers co-founder Joel Taveras’ thoughts on the game.