Crowdfunded games based off of nostalgic retro titles can be very hit or miss nowadays. For every charming game that delivers on its promises like A Hat in Time, there are titles like the ill-fated Mighty No. 9 that end up underwhelming and disappointing. Tower 57 from Pixwerk and 11 Bit Studios is inspired by top-down Amiga shooters such as Alien Breed and The Chaos Engine, and was successfully funded on KickStarter by 1,984 backers for a total of €51,504 back in 2015.

I recently got the chance to try out quite a bit of the game in co-op with one of the game’s developers, Thomas Feichtmeir, at Poznan Game Arena. Fortunately, Tower 57 seems to fall within the camp of well-made crowdfunded games; I had a ton of fun blasting through hordes of enemies in co-op, destroying the environment and showcasing the gorgeous pixel art, while playing.

Tower 57 is set in a “diesel-punk” world where humanity is now forced to live in giant Megatowers that are full of very distinct environments, and clearly separate the rich from the poor. At the start of the game, players are enlisted by a governmental organization to take down “The Supervisor” who runs the powerful company Grutin Inc. within Tower 57, and caused immense problems for the tower by shutting down production.

Players can choose three heroes to play as before the start of the game. Each of these heroes has their own weapons, subweapons, and special screen-clearing attacks. I mainly used the Don, a mafia themed character who uses a tommy gun and can summon a car for a drive by shooting with his ultimate ability. Each character seems to have enough variation to the point where players will be able to pick out favorites, but none of them seem to play radically different from each other.

“I had a ton of fun blasting through hordes of enemies in co-op, destroying the environment and showcasing the gorgeous pixel art, while playing”

The game also features some breathtakingly beautiful pixel-art. The characters and environments all felt extremely detailed, and moved quite fluidly during my time with the game. Tower 57’s environments are also very destructible, so the game displayed beautiful showers of pixels during more hectic gameplay moments.

Bullets stood out from the environment too, so I could see what I was hitting and dodging — even if our characters got lost in all of the action. The game switches between top-down and isometric views depending on the set piece, and the visuals impress each way. While it still calls back to the 16-bit era Amiga games that inspired it, the visuals do seem like they take advantage of modern hardware a bit.

After getting off of the train, Thomas and I made our way through the game’s starting area, which eased us in to the game’s mechanics. Tower 57 functions like most top-down shooters when it comes to controls, though it does even more aim-assist options for less skill-inclined players. It introduced me to both enemies that were defenseless, and ones that shot back. Players can collect health packs throughout the environment to heal, although I never really felt that endangered in the starting areas, possibly due to playing in co-op with a very skilled developer.

That is also why I never really had trouble navigating through Tower 57’s maze-like environments, which really hearkens back to this game’s clear Amiga inspiration. That being said, the game does have a map that fills itself in as players progress through the game, so players probably won’t ever be entirely clueless as to where they are.

In addition to each heroes’ starting weapons, new ones can be found scattered across the environment. These weapons can range from regular guns to barrels that shoot out AOE explosive attacks and a incredibly fun to use chainsaw. Those weapon pickups, in addition to hidden currency, encourage players to explore (and possibly destroy) almost everything the environment has to offer. 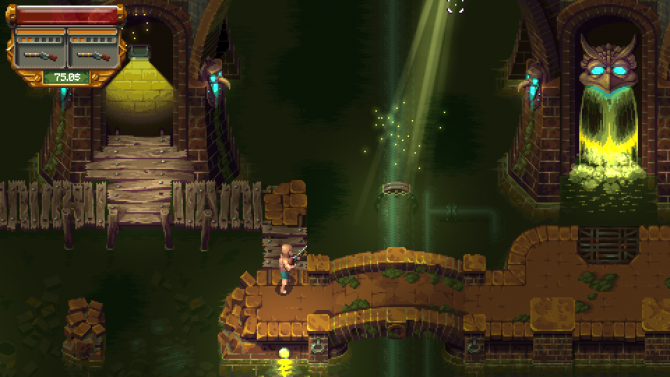 “Those weapon pickups, in addition to hidden currency, encourage players to explore (and possibly destroy) almost everything the environment has to offer.”

Thomas and I continued through this starting area until a beast ripped my legs off. In most games this would spell death, but not in Tower 57. While the loss of legs decreased my movement speeds as I flopped along, I was still able to aim around me like just liked my former biped self. That’s when I found out that if you are playing in co-op, your partner can carry you. This gives players increased mobility, and ensures the you can cover both in front and behind the still-walking character. If players lose an arm, things are a bit tougher, as you are relegated to using a much weaker subweapon.

These limbs can fortunately be restored for a cost at certain coincidentally placed kiosks throughout the environment, though players can also choose to switch characters at certain points if they are don’t have the gold or are looking to shake things up. After making our way through the decapitated train station, Thomas and I ended up at Amor’s Den, the hub town of Tower 57.

In Amor’s Den, players can restore their health, purchase new weapons, and either restore or hack off limbs in order to receive better ones that increase one’s stats. Players can also play and gamble on a variety of minigames such as darts in the game’s bar in order to hopefully see big returns on goal. Amor’s Den gives off a sleazy Las Vegas vibe, and the neon-laded environment helped to show off the game’s visuals. 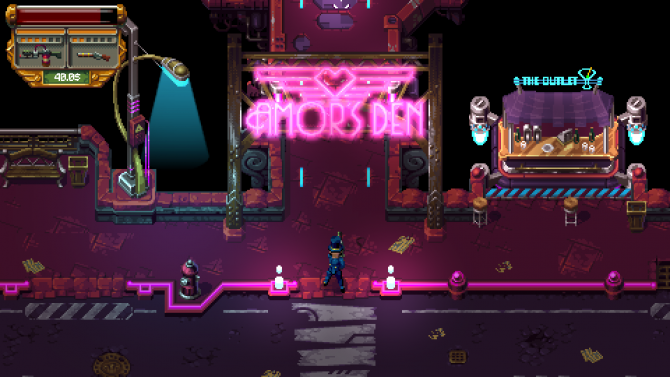 After restocking at Amor’s Den, we set off for the sewers and continued our adventure. There were quite a few close calls when I wound up losing most of my limbs on a couple characters when I wasn’t paying attention, but with Thomas’ help, we got through some of the tougher parts. Players can also trade items and cash to help each other out of binds, which definitely makes it seem like co-op is the way to play Tower 57.

After taking down a giant plant with a chainsaw in the sewers and fighting all kinds of machinery in the workshop, we finally got in a tank and were able to let off some steam by killing everything in our path. After taking down a giant turret, we got the opportunity to finally confront “The Supervisor”, though the confrontation didn’t go exactly as planned.

He told us that the organization that we were working for lied to us and weren’t who they said they were. That didn’t stop us from fighting though, and after a tough battle, we managed to take down The Supervisor and returned to Amor’s Den, where my time with the game ended. 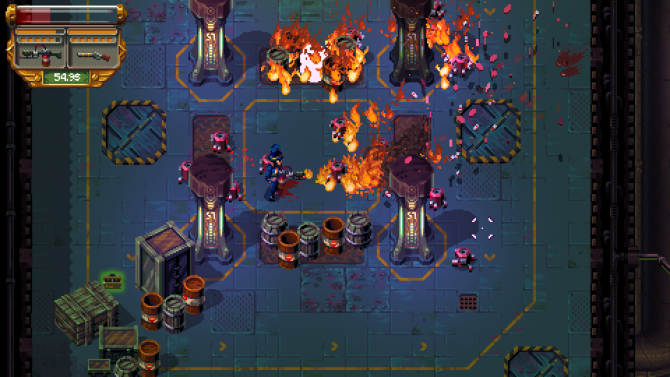 “Definitely keep an eye out for Tower 57 if you are a fan of top down shooters or Amiga games.”

I was quite impressed by the large chunk of Tower 57 I played at Poznan Game Arena. It certainly helped that I was playing with a developer who knew the game inside-and-out, so I’m hoping that the experience can be just as fun on your own or with friends. The pixel art I saw was very impressive, and and gameplay mechanics were also very solid.

Tower 57 is quite a quirky game too — how many titles can you say have a flamethrower-wielding Abraham Lincoln in them. While the story does take a back seat to gameplay, I am curious to see where it goes after the twist I encountered, and want to see what other weird environments the game will throw at me. Definitely keep an eye out for Tower 57 if you are a fan of top down shooters or Amiga games, as it seems to be a fun crowdfunded game that intends to keep the promises it made to its backers.