Three years ago, Obsidian Entertainment and Ubisoft released South Park: The Stick of Truth on PC, PlayStation 3, and Xbox 360. Since its release, fans have been patiently waiting for Ubisoft to make a sequel. After those few years (and several delays) later, South Park: The Fractured But Whole is finally here — and it goes above and beyond its predecessor.

Set after the events of The Stick of Truth, players once again assume the role as “The New Kid” in town. The story of South Park: The Fractured But Whole focuses on the kids of South Park embarking on a new adventure as their superhero alter-egos; a good chunk of the story borrows heavily from the Season 21’s episode of the South Park TV series titled Franchise Prequel, and serves more as a follow-up to the end of that episode.

For those not keeping up with the latest season, the South Park boys are planning out a super hero film franchise (to make loads of money and because Netflix will buy any original series) and unfortunately, after some disagreements between them regarding the franchise, the boys are divided into two groups and ignite a civil war: The Coon and Friends led by The Coon (Cartman) and The Freedom Pals led by Mysterion (Kenny).

Despite the tension between both teams, a majority of the story in South Park: The Fractured But Whole revolves around you and the rest of the kids looking for a missing cat named Scrambles. But as the story progress, you realize that there is something much bigger and darker going on than just a few cats missing in South Park.

“South Park: The Fractured But Whole is finally here — and it goes above and beyond its predecessor.”

Much like its predecessor, players again design their character in South Park: The Fractured But Whole, which they will control throughout the entire game. However, customization is much more in-depth this time around; not only can you change the clothing your character wears, but you can also decide which gender your character will be, their skin color, religious faith, your weakness, ethnicity, and even your character’s sexuality.

Before the game’s release, the game garnered some controversy regarding race customization with it jokingly labeled as a “difficulty slider.” During my playthrough, I did play as a black character, and there was no difficulty curve regarding the gameplay; instead, it was how the NPCs in the game perceived you, and the game even discloses this information that your race will not affect the combat itself. Aside from the race factor, everything you choose on your character sheet will alter your playthrough in some way.

After creating your character, you then have to decide which class you want to play as; in total, there are ten classes that you can choose from. In the beginning, you can only choose between three: Speedster, Brutalist, and Blaster. Each of the three categories is evenly balanced and unique, and each caters to a specific style of gameplay in the beginning.

However, as the story progresses, you will unlock the remaining seven classes: Elementalist, Cyborg, Psychic, Assassin, Gadgeteer, Plantmancer, and Martial Artist. Each class also has their own unique Ultimate abilities that you unlock, as well as specific attacks that can cause particular status effects such as bleeding or confusion.

“…everything you choose on your character sheet will alter your playthrough in some way.”

When I played South Park: The Stick of Truth, one of my biggest complaints was how the classes were remarkably similar. From my time playing South Park: The Fractured But Whole, I am glad that this was improved in the sequel, especially since you can mix and match attacks from different classes as you unlock and master them.

At any point in the game, you acquire, buy, or craft new clothing items and you want to change your physical appearance you can use your phone, which serves as the in-game menu. Overall, there are ten apps on your phone (much like the options in Grand Theft Auto V) and all have features that help you on your adventure, but the two applications I recommend focusing on are Powers (which you can use to swap your attacks) and Artifacts. 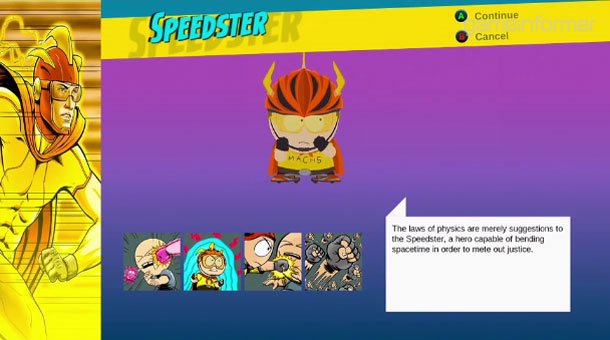 Additionally, you can craft your artifacts and purchase them from certain stores in town. Any objects you equip in the game will not be visible at all, and the clothing you wear will not affect your stats in any way. I enjoy when games make items that increase your stats and attire as a separate entity, so if there is a sweet costume you obtained you will not have to worry about swapping it out in favor of “more powerful” attire. Aside from crafting artifacts and clothing, the scrap you collect in the game can also be used to make new healing items, mission-exclusive items, and more.

South Park: The Fractured But Whole‘s gameplay is tactical, turn-based combat, meaning you can move on certain parts of the battlefield each turn and certain attacks will allow manipulating the field — such as attacking/healing a specific range of enemies. Specific battlegrounds include obstacles like unbreakable/breakable items as well as individual enemies or items which can deal damage, effects or cause an instant death. 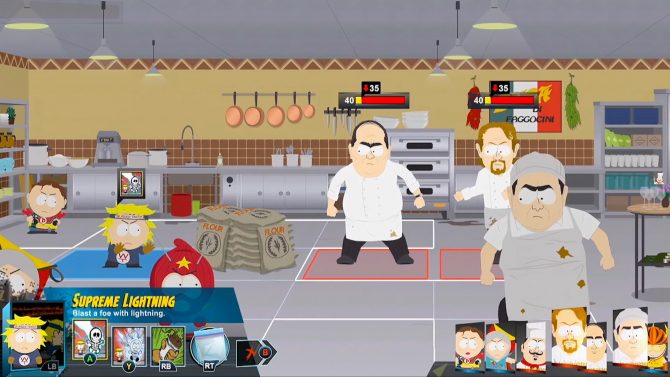 If you happen to die during a battle, you can head back to the checkpoint and plan ahead. This includes swapping out certain characters in your party, crafting healing items, or equipping different items into your Artifact slots. Depending on the circumstances, the battle will also affect your party; certain battles will require you to fight alone or fight with specific characters. But, for the most part, you have free reign on which buddies you can use.

Now because this is an RPG, there are main missions and side missions that play heavily in how the game is played. Certain side missions will allow you to unlock specific items and occasionally affect some of the residents in town, such as going to relationship counseling with Tweek and Craig or beating up a pimp for Ms. Cartman. Other side quests also help you unlock new moves and learn unique abilities, which can help you solve puzzles in town.

“More often than not, there were moments in the game where I felt like I was watching an episode of the show and not playing the game.”

Another significant component in combat is Time Farts, which allows you to manipulate time and summon enemies. There are only three Time Farts to acquire, but each of the three can also be used to change the course of a battle; whether it’s causing a glitch to skip an enemy’s turn, pausing time so you can leave your square freely and deal damage to your enemy, or spawning another version of your character.

However, you need to be strategic with how you choose you to use your Time Farts, for every Time Fart you use, you will have to wait for several turns to pass before you can use another one. Also, if your character dies at any point in the battle, you will be unable to use Time Farts until they are revived. 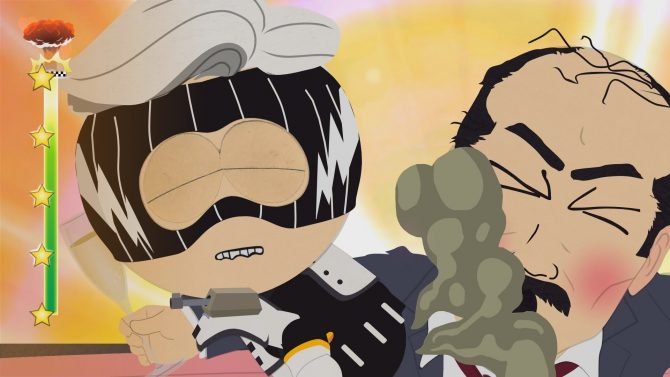 Going back to puzzles, the puzzles in South Park: The Fractured But Whole offer the right amount of challenge. While certain missions require puzzle solving, a majority of the puzzles are found in reach around the town. Successfully solving these puzzles will open new locations, shortcuts, and more. As you progress through the game certain buddies can be used to reach new places in the game that were previously blocked off such as reaching the top of buildings.

If you ever find yourself having to walk from one side of town and need to head to another side to solve new environmental puzzles or complete missions, you can use the fast travel system, which allows you to travel to certain parts of town with the next available fast-pass sign. While the fast-travel feature is nice, I wish that you could use it to travel anywhere you want on the map instead of a handful specific locations — much like fast travel systems in other RPGs (like Fallout 4). While it is not a big issue for me, others may find it a bit annoying to trudge through old environments. 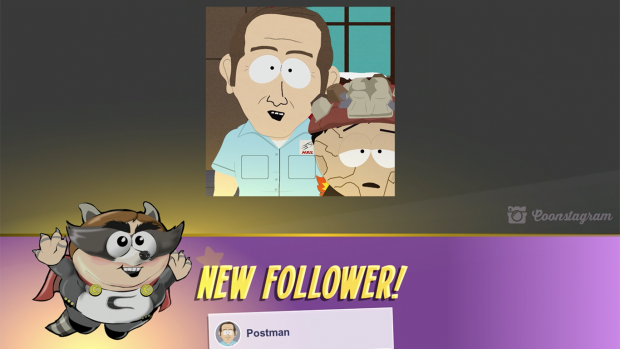 Graphically, the game looks fantastic. Running on the Snowdrop Engine, South Park: The Fractured But Whole is one of the most beautiful games of this year. More often than not, there were moments in the game where I felt like I was watching an episode of the show and not playing the game. The characters moved just like they do on the show, and all the voices are done by the show’s respective voice actors. In other words, you will sometime get lost in playing The Fractured But Whole, forgetting you aren’t just watching a longer episode of South Park.

Speaking of the show itself, the environments in the game had me smiling from ear to ear. If I was not laughing at all the dialogue from the cutscenes, I was chuckling from the original songs that debuted on the show, laughing at all the Yaoi pieces that were scattered around town, and even going into random houses to poop in their toilets. Everything that keeps South Park on air for 21 seasons is represented in some way in South Park: The Fractured But Whole, and it never felt like it was overused.

“…I got the feeling I was actually in the world of South Park.”

More importantly, I got the feeling I was actually in the world of South Park. One of my favorite aspects of the game was using Coonstagram to take selfies with the townsfolk, gain new followers, and even watch my feed as those I was following updated it with their own posts. Sure, it’s a small detail — but small details have been one of the best aspects to the long-running series and The Fractured But Whole whole-heartedly follows through.

All in all, South Park: The Fractured But Whole is a fantastic game. While there are some minor flaws, I couldn’t put my controller down. Aside from being one of my personal favorite games of this year, it also holds a special place in my heart as one of the best Ubisoft games I have ever played. If you are a fan of the TV series, as well as The Stick of Truth, I highly recommend purchasing this game; it is well worth your time, and it is worth every penny of its purchase price.