Senran Kagura: Peach Beach Splash has been released recently in the west, but Marvelous Entertainment and Honey Parade games have quite a few titles in the works for the series.

In order to learn more about them, DualShockers sat down with Producer Kenichiro Takaki, who talked about a wide variety of topics, from upcoming titles to broader aspirations for the future.

First of all, we chatted about Honey Parade Games. They’re still part of the Marvelous group, but Takaki-san wanted to give his staff a unique identity, so he decided to create something new. Takaki-san normally focuses on a single console for each of his games, as he himself is a big fan of consoles, so he wanted to focus on the specific features of each of them.

Speaking of Senran Kagura Burst Re:Newal, Takaki-san explained that it’s a remake, and also a renewal of the original game for 3DS, and then there is the fact that “nyu” means “boobs” in Japanese. The game changed from 2D to 3D action-style, and its mechanics have been completely overhauled, so it’s going to be pretty much a fully different game. It’ll also feel more aggressive.

About the recently-teased Senran Kagura 7even, it’s going to take some time before the game is revealed. We’re going to get Burst Re: Newal, ShinobiRefle and then Peach Ball: Senran Kagura. 7even will come at some time after that.

With two games coming being developed for Nintendo Switch, we asked Takaki-san to talk more about it. He really likes the HD Rumble system, as it’s completely different from typical vibration. It was really challenging to create something that fits it, but it’ll be a completely new feeling when players try it out.

The team is still working on it, so Takaki-san can’t say that the feature is complete, but it’s going to be very fitting to the fanservice included in the series, so fans will probably like it. Interestingly, Takaki-san mentioned that at the beginning ShinobiRefle is a pure romantic story like similar to Tokimeki Memorial. As you play further into the game, the usual Senran Kagura fanservice flavor surfaces.

About Peach Ball: Senran Kagura, Takaki-san can’t share much yet, but the plan is to have the Senran Kagura girls lay down on the pinball table and have the ball bounce off certain key areas on their bodies. It’s going to be a full-fledged game, unlike ShinobiRefle, which is a smaller title created to showcase what the team can do with Nintendo’s console.

Since the games are on Switch, Takaki-san mentioned that in the past Nintendo was a bit against the idea of fanservice, but as the partnership on Senran Kagura progressed and the series started selling, now they’re just like “Go Takaki! Let’s do it!” Of course, he was talking about the Japanese branch of the company, and Takaki-san doesn’t know if the same goes for Nintendo of America. Luckily nowadays the Switch is region free. 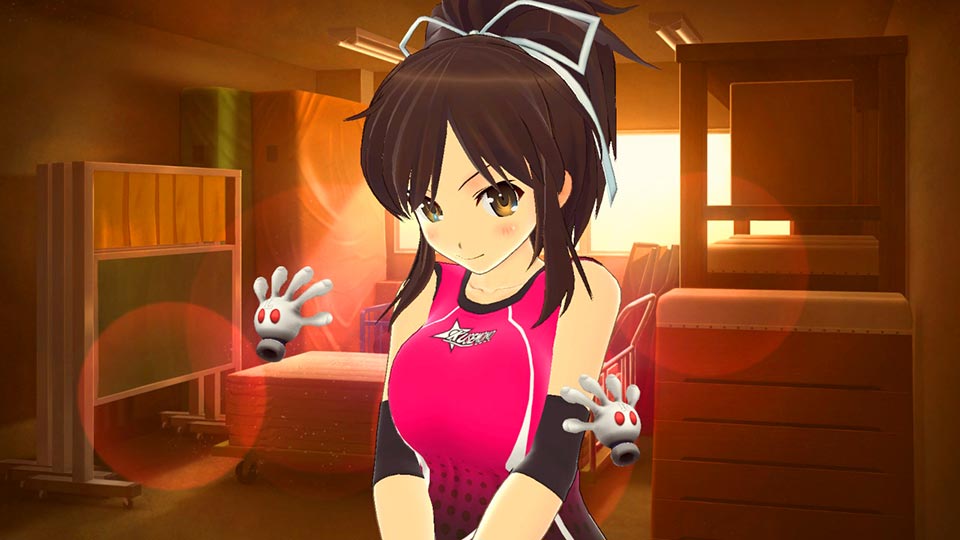 Takaki-san would also like to do more crossovers like the appearance of Marie-Rose and Honoka from Dead or Alive in Senran Kagura: Peach Beach Splash. There are many fascinating and pretty characters that he’d like to include in his games. As an example, we brought up The King of Fighters‘ Mai Shiranui, and Takaki-san confirmed that he’d love to have her.

After having explored multiple genres, Takaki-san would like to develop a dodgeball game next. Another genre he would love to work on is 2D fighting games. Again, we asked him if he’d like to collaborate with Arc System Works as an example, and he seemed quite appreciative of the idea. For that kind of game, he sees PC and PS4 as ideal platforms, and he’d also like to work on Xbox One.

Speaking of Microsoft’s console, it isn’t really popular in Japan, so it has been left aside for the moment, but it’s becoming more popular worldwide, and the same can be said for the Senran Kagura series, so Takaki-san would like to try releasing a game on Xbox One at some point.

For the moment the series is popular mostly in Japan, but Takaki-san feels that western fans are really passionate about it. At E3 he had a fan meet and greet, and certainly, there were many guys, but he was surprised by seeing many ladies as well. He was also happy to see the enthusiasm of both male and female fans.

Asked whether meeting so many ladies among the fans inspired him to make games that would be more attractive to a female audience, Takaki-san mentioned that he would like to try something like that. Yet, he still doesn’t fully understand what female fans want, so he wants to investigate on what they’re looking for in a game first. He wouldn’t want to start such a project before he completely understands what the female audience. 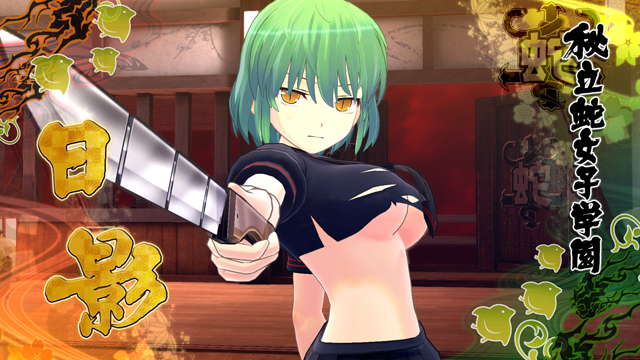 Funnily, he also brought up an April Fool from 2012, for which Marvelous revealed a game titled Kagura: Aoaki no Shonentachi, featuring male versions of the original Senran Kagura characters. Since then, the female members of the development team have been asking Takaki-san about doing something like that.

Interestingly, during our chat, we learned that there are many women working in Takaki-san’s development team, and SENRAN KAGURA promotions team lead, Yumi Mori is also a lady. We actually met her as well and asked her how she feels about working on the Senran Kagura series.

Mori-san actually doesn’t know why she was chosen for the role because she used to think that a guy might have been more suitable. Yet, then she understood that her insight on the female point of view was actually useful. She isn’t against anything that appears in the games, and she is able to provide lots of ideas for them.

Speaking of the difference in timing between Japanese and western releases, Takaki-san explained that the team would like to share the games with the western fans without delays, and they have been trying to make the launches as close as possible. That being said, it’s not easy.

He would certainly like to release the upcoming Switch games ShinobiRefle and Peach Ball in North America, even if he doesn’t know what Nintendo of America will think about that just yet. Especially the pinball game is something that has a good chance to click with customers in the western market, so that could be a good chance. Pinball actually isn’t that popular in Japan, but Takaki-san likes it, and as usual, he wants to create something he loves. 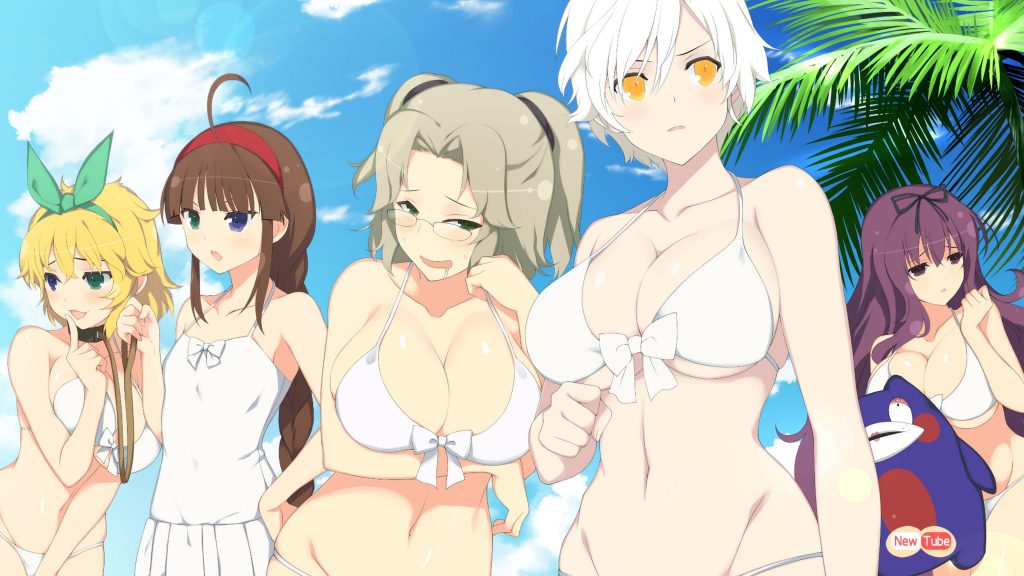 While 7even is going to be released for PS4 at first, Takaki-san would like to launch it on PC as well. This is something he would love to do for more titles from now on, including Peach Beach Splash itself. He would like to do release PBS on Xbox One as well, but the team is pretty small, and they do everything by themselves, so, for now, it’s going to be difficult.

The game’s nature as a third person shooter would probably make Peach Beach Splash rather suitable for the Xbox fanbase, but Takaki-san mentioned that Microsoft might be a bit strict when it comes to sexy content. At our mention of the fact that the house of Xbox allowed the release of Conan Exiles, which includes full nudity in Europe and partial in North America, he explained that there could be differences in how realistic content is viewed, as opposed to anime-like. That being said, Takaki-san did not engage in serious talks with Microsoft on the topic just yet.

Speaking of platforms, we asked Takaki-san about his personal preference between PS4 and Switch, and he threw us a curve ball bringing up the PS Vita, as it’s portable, with good specs and connectivity. When we mentioned that the Switch could fit those parameters as well, he explained that it’s slightly too big for his taste in terms of being a handheld platform. Funnily, he often tells Sony that he would like a successor to the PS Vita. 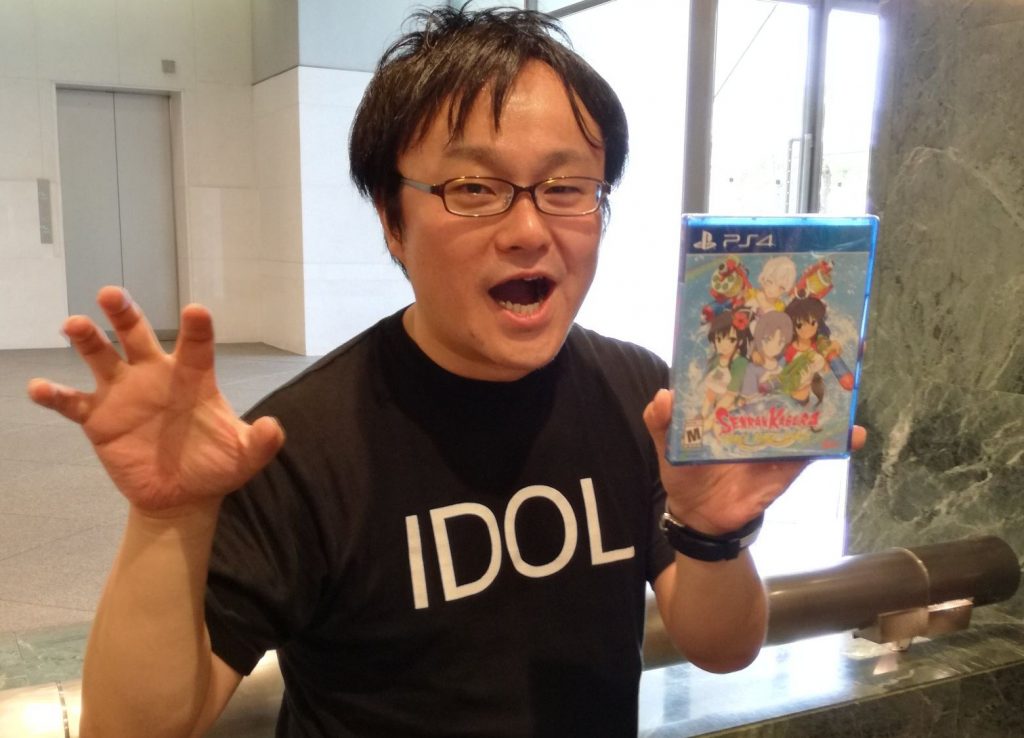 About the mobile game Senran Kagura New Link, Takaki-san confirmed it is the first in the series which has JRPG elements and also has a gacha system. He feels mobile games have incredible capabilities of portraying stunning 3D characters and wanted to create something that would allow more people to get a feel of the Senran Kagura series— in the hope that they would then move on to the actual console games. That being said, he’d also like to release New Link in the west. He thinks that fans of the series would be pleased since the graphics are really nice.

Considering that Honey Parade Games has been working on several titles at the same time, Takaki-san revealed that the team has been expanded slightly as of late, but not too much. Interestingly, he teased that there are actually going to be more game reveals in 2018, created by the team and a different new producer. Next year will be “really exciting.”

Unfortunately, Takaki-san could not share more information about that, but he wants to continue making more and more games. He feels that it’s important to keep going non-stop. That being said, the studio is done with big announcements for this year, and they will need to work on the games already showcased in 2017 before moving on to new things.

Last, but not least, he extended a message to gamers about to play Senran Kagura: Peach Beach Splash. He saw a lot of western fans embracing the Senran Kagura series, and the third-person shooter genre is really popular in the west. Water guns may be unusual, but he feels that they were implemented in a fun way, so he hopes that everyone will enjoy the game.

If you want to read more about Senran Kagura: Peach Beach Splash, you can check out our full review. The next game of the series with an announced release date for Japan is Senran Kagura Burst Re:Newal,  launching on February 22nd, 2018 exclusively for PS4.