There was no doubt in my mind that Psyonix would make sure that the Nintendo Switch port of Rocket League would imitate the PC, PS4, and Xbox One versions of the game seamlessly. I got the chance to go hands-on with Rocket League on Nintendo Switch and, unsurprisingly, the game runs and plays as smooth as fans would expect on the handheld-console hybrid.

Seeing is believing on the Nintendo Switch. It’s hard to visualize the same experience on what is weaker hardware than its console rivals — on handheld too, no less. But the Nintendo Switch continues to surprise developers and gamers alike. There are virtually no drawbacks from the Switch version of Rocket League.

Rocket League runs beautifully and is just as responsive as the multiple other versions of the game. The only thing I could notice right away was the seemingly downgraded graphics; the cars still look great, but there isn’t as much detail on some things in the Nintendo Switch version when compared to the other versions of the game. This is a very small price to pay for the leisure of having such an incredibly addicting game on the go, running as well as it does.

“There are virtually no drawbacks from the Switch version of Rocket League.“

I’ve been playing Rocket League for two years, ever since it was available as a free PlayStation Plus game in 2015. In fact, it has been the one constant game I’ve been going back to this console generation. So I hope that you can trust me when I say that the Nintendo Switch version is going to be a real treat for people who just can’t get enough of the rocket-powered supercars.

During my short time with the game, I was able to seamlessly port over my skills and pull off ariel shots and ride the walls with ease using the Joy-Con Controllers. I was initially worried that the Joy-Con wouldn’t feel right for Rocket League, but I adjusted to the new controller after a minute or two of getting a feel for the game.

Now that Psyonix has stepped up to the plate, I hope that Nintendo can deliver an online experience on Nintendo Switch that’ll continue building upon Rocket League’s community. I’d like to be able to quickly get into and set up games with my friends or other players I meet online. My only experience ever trying to play Switch games with my friends was on Splatoon 2 and, if you’ve tried that, you know it’s was not always the most reliable. In other words, Rocket League may be the defining test case for Nintendo burgeoning online platform.

On top of that, Rocket League will reportedly have crossplay between Xbox One and PC players. If Nintendo can meet the standards that players expect in an online experience, I think the Switch version of Rocket League will be one of, if not the, best way to play it.

Nintendo obviously already has a ton of great IP that would make for some neat content in the game. Back in August Psyonix announced a slew of Nintendo themed cars based on Mario, Luigi, and Metroid, were all going to be exclusively added to the Switch version. I’d love to see some more flags, toppers, and cars based on all sorts of Nintendo IPs like Fire Emblem, Kirby, The Legend of Zelda, and more. How could they not eventually do an F-Zero crossover? There’s so much potential as to what can be added from the many loveable worlds of Nintendo. 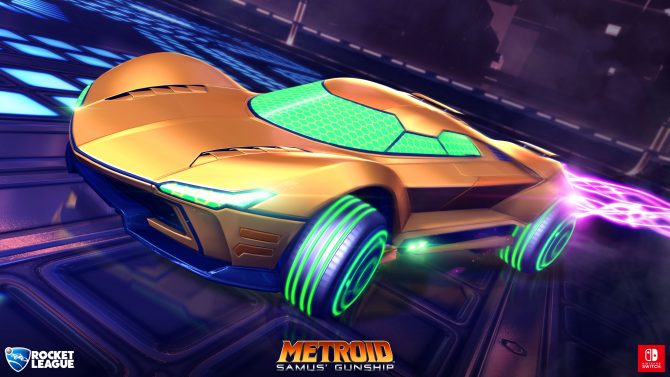 “If Nintendo can meet the standards that players expect in an online experience, I think the Switch version of Rocket League will be one of, if not the, best way to play it.”

Hopefully we’ll get an official release date from Psyonix soon for the Switch version of Rocket League, which is still slated for Holiday 2017. The version I got to play seemed like it was ready to go — but there is always fine tuning to be had. I know I’ll be personally buying the game the day it comes out on the Nintendo Switch.

Rocket League is available right now on PC, PS4, and Xbox One.