Rise of the Tomb Raider has been associated with Xbox since it was announced as a timed exclusive for Microsoft’s console, so it’s not surprising that Crystal Dynamics is at the forefront of taking advantage of the power of the Xbox One X with an update supporting the console.

DualShockers had a chat with Senior Brand Director Rich Briggs, who provided a detailed overview of the upcoming update, and of how the game will support Xbox One X.

First of all, we hear that the developer treats every platform as its own launch, maximizing each specific hardware. They learned a lot from the PC and PS4 Pro versions. The main difference is that with the Xbox One X version, it’s the first time they were able to deliver a true native 4K signal. For that reason it’s the “highest fidelity version” among all.

Briggs believes that Rise of the Tomb Raider on Xbox One X might actually help convince those on the fence about purchasing the console. He played the game over ten times, and he still plans to play it when the new console releases. The level of detail on Lara and on the world enables a deeper layer of immersion.

On Xbox One X you can go through the game and see things that you couldn’t notice on other platforms thanks to the true 4K signal, in addition to the way the HDR support makes the colors pop and look realistic. Crystal Dynamics always aimed to bring people on an adventure with Lara, and the new console turns that adventure into an even more immersive experience, making it worth another playthrough.

Briggs mentioned one scene when Lara goes o Syria at the beginning of the game: you’re overlooking a valley and you can see a town being attacked. Before you just saw the explosions in the distance, but on Xbox One X you can actually see the debris coming off the buildings. In the domed area of the Prophet’s tomb you can see all the individual leaves, while in the Remnants’ valley you can watch across the hub area, and see clearly all the collectibles and the challenges you may want to do afterwards.

“The difference here is this is the first time we were able to deliver a true native 4K signal. For that reason this is the highest-fidelity version of Tomb Raider that we’ve ever put out.”

While Briggs achieved 100% completion for the game, and knew that those elements were there, seeing them from so far away and in such high fidelity is really impressive for him.

Microsoft was really supportive through development, and Crystal Dynamics also worked with Nixxes Software, whom according to Briggs are “masters” of getting every ounce of power that they can out of the hardware [Editor’s note: this is not too surprising, considering that Nixxes worked on the Xbox 360 version of the game]. Microsoft gave developers  early access to the development kits, making sure that there was constant contact with the tech team on the console.

The game already was a great foundation, so porting it to Xbox One X wasn’t a matter of solving this or that problem, but more how to take it to the next level.  They wanted to add all the bells and whistles to the game, and Microsoft was there every step of the way showing them how to get the most out of the hardware.

Interestingly, the version that is being currently showcased is still alpha code, and developers are continuing to improve it. Crystal Dynamics believes the game will be an “incredibly rich, very vibrant and beautiful looking world, and the best-looking version of Lara when it releases on November 7th” because what we’re seeing today isn’t even the final code, and developers are continuing to add polish to it.

“Nothing is easier easy in development, but it wasn’t difficult. Within a manner of months we were able to have our version of Rise of the Tomb Raider running on Xbox One X.”

It took a few months to get the game up and running in 4K on Xbox One X. Nixxes is very familiar with the engine, and Microsoft has been very supportive. While Briggs couldn’t go into specifics on the development time, and nothing is ever “easy” in development, the process wasn’t difficult either.

In a manner of months the game was running on the new console, and that was the hardest part. Then it’ll became all about how to keep pushing it forward.

We tried to investigate if the third party developer who commented with the now well known “this is no bullshit!” line on the Xbox One X after receiving the development kits was from Crystal Dynamics, but to Briggs’ knowledge that’s not the case. Looks like we’re back to square one in learning who that was. 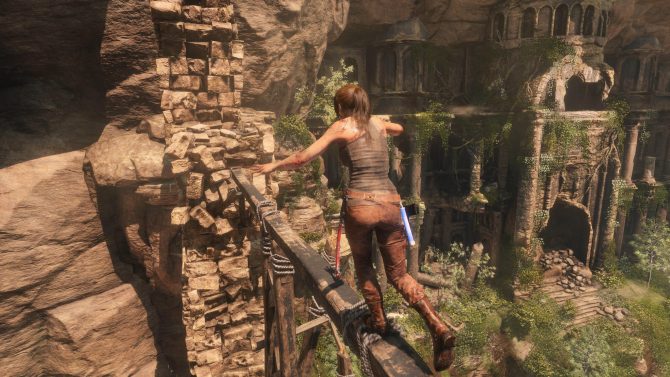 Briggs also talked about the various modes in which we can play the game. In Enriched Visuals mode, there is volumetric fog added,  better ant-ialiasing, true reflections, denser foliage and more. It runs at 30 FPS in 4K checkerboard, while he Native 4K mode offers that true and pure 4K signal.

On top of that, the High Frame Rate mode runs at 60 FPS across “most of the game.” There are “a few places where it will dip.” Briggs mentioned that the “vast majority” of the game runs at 60 FPS. While he could not provide a specific assessment, he did confirm that 90% is a “safe estimate.”

“How do we get Lara’s cinematic hair on her model at all times in the game? The Increased memory allowed us to do that.”

Interestingly, Brigs doesn’t think there really were any specific challenges in creating the Xbox One X version. The team at Crystal Dynamics worked really closely with Nixxes, and he never heard about any blockers from them.

That being said, there were challenges that developers set for themselves, like how to get Lara’s cinematic hair on her 3D model at all times through the game. The increased memory allowed them to achieve it. Basically, Lara’s hair will look as it does in the cutscenes all the time.

Briggs believes that it’a difficult to predict whether the era of consoles generations has ended, replaced by incremental console updates. That said, he’d be surprised if this current trend did not continue. He feels that consoles are getting closer to the PC landscape allowing players to feel like they’re constantly on the cutting edge of tech, and to have something for everyone with different models. According to Briggs this is working really well, and he feels that it’s going to continue. 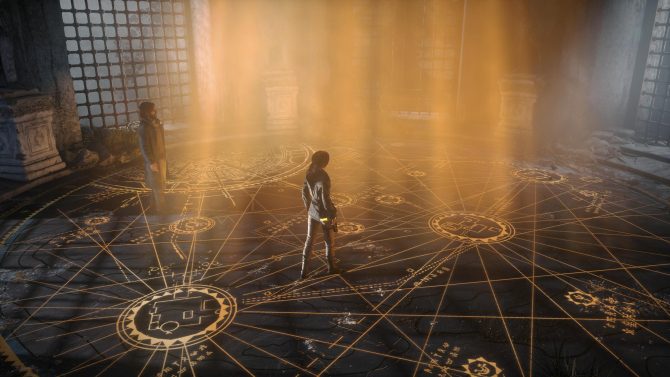 Asked whether there is any chance for a Nintendo Switch version, Briggs simply mentioned that the team is always looking at new technology and platforms, to see what makes sense for their community, and how they can continue to deliver the best possible experiences. There is nothing to announce right now, but they’re always looking at how they can push themselves.

Asked whether he thinks that Tomb Raider would be fun on the go, he answered that he feels that the game would be fun just about any way you play it.

“We are always looking at new technology and platforms, to see what makes sense for their community, and how we can continue to deliver the best experience possible.”

Talking about the pricing of the Xbox One X, Briggs thinks that there are different offerings for different audiences. As long as there is flexibility where those who want the cutting edge have an advanced model, while everyone else can get a base model, it’s healthy for the marketplace. It’s like for Rise of the Tomb Raider having three different visual modes, as it puts the power in the players’ hands. The same holds true when looking at different platforms, and Briggs doesn’t feel that having options is ever really a bad thing.

Rise of the Tomb Raider is currently available for Xbox One, PS4 and PC, with the enhancements for Xbox One X going live at the launch of the console on November 7th.

If you’re not familiar with the game and want to read more, you can check out our review of the original Xbox One version.