I’ve always enjoyed a good racing game. Although it isn’t my favorite genre by any stretch of the imagination, there is just something about the thrill that racing games provide that match no other genre. While I usually prefer cart racers, that doesn’t mean that more traditional arcade racing titles can’t catch my eye — so long as it looks fun, visually impressive, and most important of all, thrilling. These three elements are what caught my eye with Redout. It doesn’t look like a normal racing game, and it certainly doesn’t act like one too.

In Redout, players have a variety of different gameplay options, however none of these options are anything groundbreaking. To start, if players want to continuously race over and over again with little to no stops, then the career mode is for you. If you don’t have a lot of time, just sit down and do a quick match on the track of your choosing.

The game also offers two different multiplayer options. If you want to play with your friend locally, you’ll be able to in the game’s splitscreen mode. The one downside to this mode is that it only allows one other person to play locally. This brings us to the game’s online multiplayer mode, which allows you to join a random game quickly, search for a specific match, or host one if you feel up to it.

While I initially was able to join and race against other players a couple times, I very quickly found out that there are either not many people who own the game, or choose to play online, meaning you’ll be sitting and waiting in a lobby for while before someone will join.

Let’s start with one of the things I love the most about this game: it’s presentation. Don’t expect any type of realism with Redout. As soon as you see the menu, you’re immediately greeted with a futuristic art style, and some amazing EDM. This presentation is only heightened when you actually start a race.

As the countdown begins, the music gets louder, and louder, and louder. As soon as you’re given the go ahead to start, and slam your finger on the trigger, you feel like you’ve just hit lightspeed in a Star Wars movie. I wasn’t expecting to go as fast I did during my first match. It definitely doesn’t ease you into the experience at all, which can be a good thing if you like thrills.

While the thrills you experience in Redout’s races are something that shouldn’t be scoffed at, it’s also inherently one of the game’s biggest problems. Because you’re going so fast, I had an incredibly hard time controlling each and every one of the ships. Even the ships that statistically had better handling didn’t perform the way I wanted them to. This can have some disastrous results.

This means that, without practicing a couple races on each track, you have almost no way of knowing when a turn is coming. While the game will tell you ahead of time that one is approaching, you have to have a stellar reaction time in order to appropriately account for the turn. Because of this, you will crash in Redout, and you will crash a lot, sometimes to the point of frustration.

While Redout’s tracks are incredibly hard to maneuver, I’ll give credit where credit is due: each track feels incredibly unique. Although some may share the same type of environment, none of the game’s 35 tracks feel similar, and developer 34BigThings should be commended for that.

”As soon as you’re given the go ahead to start, and slam your finger on the trigger, you feel like you’ve just hit lightspeed in a Star Wars movie.”

Another aspect of the game I love is the balance. While you’re not going to find an in-depth customization, with tuning, and handling changes, you will find some of the most balanced racing options I have ever seen.

Essentially, players automatically have the Class One version of each type of ship unlocked. Class Two, Three, and Four can all be unlocked by leveling up and purchasing them with the in-game credits. Right off the bat, each type of ship has their own advantages and disadvantages.

For example, the Lunare Scuderia type has the best grip in comparison to others, while the Conqueror has the greatest max speed. As you level up, and unlock the different Class versions of each ship, the statistics will increase as well. However this doesn’t mean, you’ll be able to use a Class Four ship (for example) all the time; some tracks restrict what type of Class you can use.

In addition to that, before each match, players have the chance to not only pick what type of ship they want, but also what powerups they want as well. Players are allotted two powerups during the match, and each one puts your own personal spin on the ship itself. 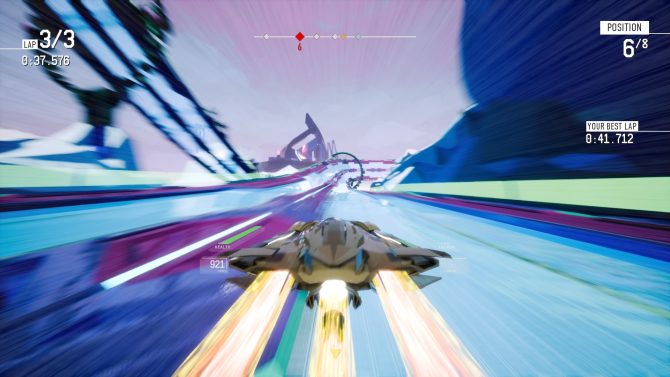 For example, one powerup reduces the amount of damage you take when hitting a wall, while another can increase your max speed for a short amount of time. I personally choose the powerup that allowed for better handling and grip. All of this allows for each type of ship to hold their own against others, meaning that no one ship will have an advantage over someone else.

”While you’re not going to find an in-depth customization, with tuning, and handling changes, you will find some of the most balanced customization I have ever seen.”

All in all, Redout is a racing game that can most definitely offer you a unique experience — however it will take a ton of practice before you will be able to complete a race without running into any walls. While this doesn’t make Redout a bad game by any means, it can definitely create some very frustrating races — especially when you are in first place, and you accidentally run into a wall, destroying yourself in the process, and subsequently falling behind thanks to a punishing control scheme.

In addition to that, unless you want to keep trying for your best score in each track offline, you’re not going to want to come back to the game — not many people are playing online. While the game is most certainly fun and unique, I cannot recommend the game for $40 to most people. If you’re a racing fan, and you’re getting bored with the genre, then this offers something new and fresh, but beyond that, it’s probably worth waiting for a small discount.