Shoot em’ ups may look similar, but I can assure that no series does it quite like Raiden. The series took off in the early 90’s, but I never got into it until developer MOSS took over and brought Raiden III to the west. Typically, I like to play numbered series from the beginning, but I feel like Raiden’s story is pretty straightforward and allows for gamers to jump into Raiden V: Director’s Cut at any time.

Raiden V: Director’s Cut is the definitive version of Raiden V for the west and includes some new features not present in Japan exclusive Xbox One version. With a new hardware generation open for more shmups, MOSS has a lot to prove with this release, which hopefully paves the way for more titles in this genre to come west.

Raiden V: Director’s Cut begins with starting the campaign. This is where players will be able to choose their ship and weapon loadout. There are three different weapon slots available for each ship; players will equip one of three types in three different categories, blue, red, and purple. Each weapon has a different theme: blue is probably the most interesting with a wide range of laser type attacks, Red is different variations of the spread shot, and Purple is a homing laser.

It might sound cheap of me, but I felt most comfortable with the purple weapons. Homing lasers aren’t all that powerful, but it allowed me some time to breath when the action got heavy. With that said, there was only one weapon that I couldn’t quite get the hang of, which was in the blue category and it launched a crystal onto the field that the player can shoot to ricochet the beam of light in all directions, it just never worked for me.

Some of these weapons have been brought over from previous installments, and returning fans will feel comfortable jumping right in with their favorite loadouts. However, I liked trying the more interesting weapons and found them to add much variety to the levels. 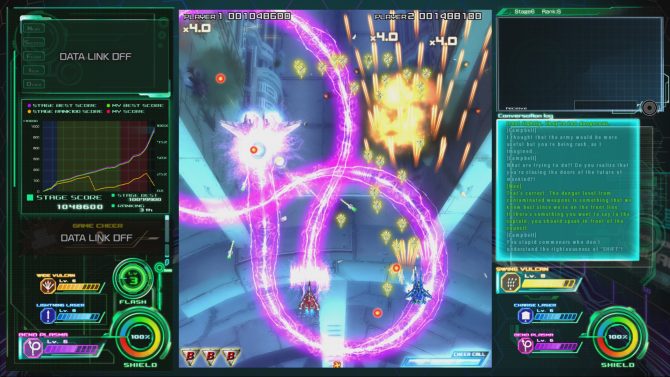 During missions, it’s possible to level up your loadout up to level 9. This requires the players to pick up a weapon icon that appears after a specific enemy is destroyed. However, this symbol changes color periodically to signify the corresponding weapon, which can either turn your gun to a different category or level-up the weapon you’re using.

As I stated before, I stuck with the homing laser for most of the time spent with the game, not because it was the most powerful weapon, but because I was comfortable with it. This is probably the only issue that this system has as it doesn’t require the player to switch through their arsenal very often once they have a level 9 weapon that is wiping enemies out one by one.

I attempted not to let this affect a few of my playthroughs, but halfway in I found myself relying on one weapon and taking it to the boss. Additionally, players have access to bombs that will clear the screen of enemy bullets as well as inflict massive amounts of damage to enemy ships. 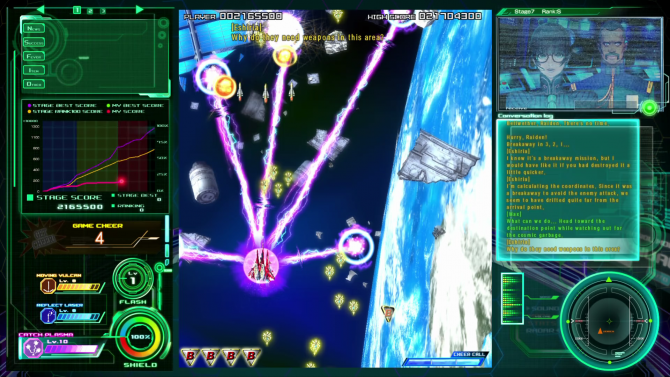 Raiden V: Director’s Cut has some pretty impressive features, while it lacks an actual online multiplayer mode, there is a neat “Cheer” system that allows players to help each other throughout the game’s campaign. As you play, the left terminal will display specific goals that other players have met in their games, by hitting the cheer button you’re able to provide them with a bonus to their Cheer gauge. In return, other players will be able to do the same for you.

Executing a Cheer Call allows the player to completely remove the enemy projectiles on screen. This ends up being extremely helpful in the later parts of the game. Also, it’s cool to see the users who cheered you on after the ending credits roll, a feature that I remember enjoying from Journey. 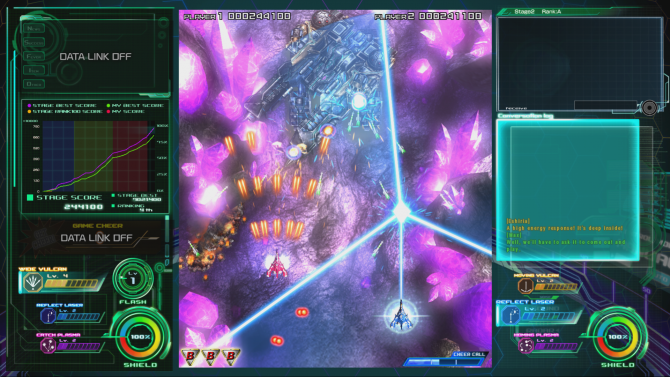 “…the more I played, the further I could get without dying — and I’ll take any progress made as a victory.”

Raiden V: Director’s Cut’s difficulty can be chosen at the beginning of the game with Normal being a bit too easy for skilled bullet-hell players, but still offers some challenging moments. MOSS did attempt to make this game accessible seeing as they’ve replaced the in-game lives with a life bar. After taking damage, this life bar decreases based on the amount of damage received, depending on the defense of ship, the ship could potentially only sustain a few hits.

There’s no limit to how many continues you get, but your score does reset after a death. I saw the game over screen many times during the last few levels, but the more I played, the further I could get without dying — and I’ll take any progress made as a victory. 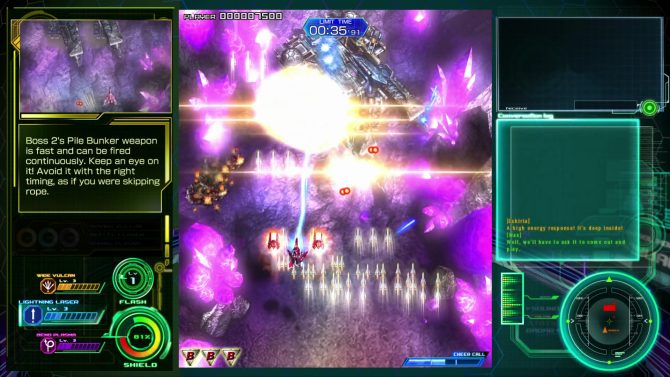 Raiden V: Director’s Cut’s campaign does some exciting camera work during a few of the level that I thought split the game up nicely. Along with the various stage environments, the camera would sometimes begin to pan vertically or even straight up as if you were on an elevator.

Additionally, there is a story that plays out during the game’s campaign, but there is far too much action going on to pay attention to what is happening. However, this audio is in English and does make a separate playthrough worth it just to try and figure out what’s going on. That being said, the game’s music is just epic and adds to the gameplay experience during each level.

Lastly, the game does have a few different endings that require S rank on levels as well as leveling up each of your weapons. Some of the endings are heartbreaking, but gaining the true ending will unlock a new boss that I can’t defeat without dying far too many times. 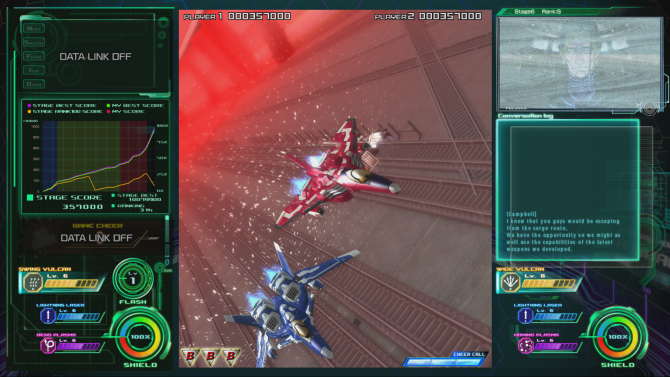 “Raiden V: Director’s Cut offers a wide variety of weapons and difficulties that are sure to keep players busy for some time.”

Raiden V: Director’s Cut is a great shoot ’em up game for fans of the genre and the Raiden series. The game plays it safe regarding adding new features and separate modes, but there is enough gameplay here to warrant playthroughs and hi-score attempts.

Raiden V: Director’s Cut offers a wide variety of weapons and difficulties that are sure to keep players busy for some time. I could have used a few additional modes, ships, and weapons, but what’s provided was enough for me to have a blast. Hopefully, the success of Raiden V: Director’s Cut opens the floodgates for the bullet hell genre on consoles in the west.