The Nintendo Switch has suffered several waves of shortages in its Japanese home turf, but lately it has settled on very solid sales, moving over 70,000 units during the last couple of weeks.

Have the shortages been solved, or is the console still selling out in the archipelago of the rising sun?

In order to find out, I visited Akihabara yesterday, setting foot in the heart of gaming in Japan. I picked a Saturday afternoon, because the weekend is pretty much the most common time frame for Japanese gamers and families to go shopping, and I intended to reproduce a similar experience.

How hard was it to find a Nintendo Switch for sale? Do come along and see for yourself.

04:06 PM – I walk out of the Akihabara Station, right into the sea of nerds and tourists crowding the area. It’s time to start my quest for the Switch.

04:13 PM – My first stop is Yodobashi Akiba, which arguably the most popular among the local electronic stores. When you see pictures online with lines of gamers waiting to purchase the newest game or console, they’re normally here.

Unsurprisingly, the Switch is nowhere to be found, and there is a sign asking customers not to line up for it.

04.27 PM – I reach Chuo Dori,which is Akihabara’s main street. It’s time to get into the recently-rebranded Bic Camera, which is the second biggest electronics store of the area.

Once again, while there are lots of boxes on display, the result is the same: all models are sold out.

04:40 PM – I move on to Sofmap, another large and popular store almost completely dedicated to games and geeky stuff like anime and figures.

The result remains the same: that red sign in Japanese means exactly what you think it means: “out of stock.”

04:45 PM – It’s getting a bit darker, and I make a beeline for a smaller store of the Mulan chain. Wait… What is that? A Switch box with a sign saying “In Stock! First come first serve!” …Could it be?

I quickly get inside, and indeed, I find a few Switch units. Turns out that they’re second-hand units, priced at 37,800 yen (all prices mentioned here are excluding taxes, which means that the real price is 10% higher). That’s $336, and it’s considerably higher than the actual base price of a new Nintendo Switch, which is 29,970 yen. Sheesh…

04:50 PM – I pass by a small tax-free shop selling all kind of stuff, and I actually eye a few Nintendo Switch boxes.

Those are the first new switch units I found, but my joy is short-lived: The price is 44,800 yen, which I confirm with the store clerk while trying hard not to laugh. That’s $397.76, and it’s  full 50% markup on the base price of a Switch.

4:58 PM – I resume my search, and I find Edion, which is another major retail chain which is likely to have the console at its base price, or not at all.

Prodictably, the “not at all” option proves to be the current one. The small blue stickers portraying an apologetic employee say “Out of stock now… Sorry.”

05:01 PM – I end up at one of the Trader stores, and as the name implies, it specializes in used games and goods.

This one has several Switch units inside, and they’re all second-hand. The price is still 37,800 yen.

05:11 PM – It’s dusk, and the alluring neons of Akihabara start to shine. I walk into a store of the Lamatarra chain.

Inside, I find some units marked “unopened second hand” with loud stickers that say “there won’t be another chance!” and “when you find one it’s time to buy it!”

As I continue my increasingly hopeless quest, I find something rather peculiar on the street: I guess they don’t need a Switch. 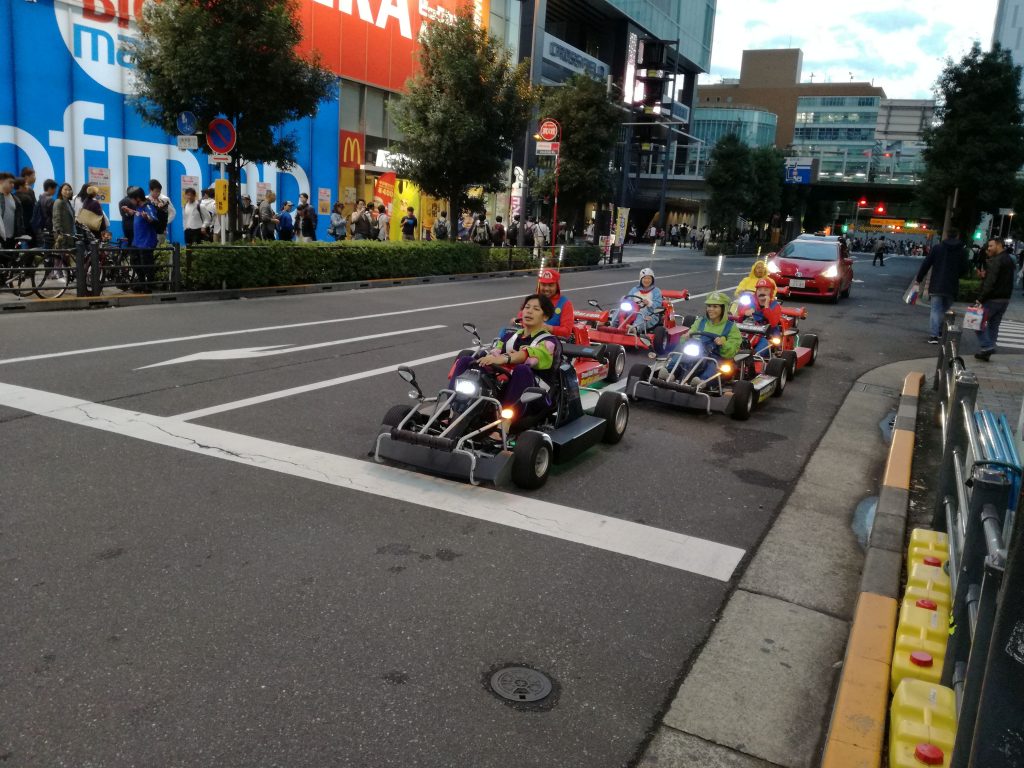 05:22 PM – I visit one more Trader store. Once again, it’s the realm of pre-owned consoles.

I find two switch units there, priced 36,000 and 37,000 with the discrepancy due to different conditions.

05:27 PM – One more Lamatarra store welcomes me with Switch boxes in full sight and glaring stickers saying “Emergency Arrival!” both in Japanese and English.

The store clerk tells me that those Switches are actually new, and the price certainly appears to reflect that: 40,000 yen for the grey version, and 43,000 yen for the neon blue and red version. Incidentally, this was the only one I found during my exploration with the colored Joy-Con controllers.

05:36 PM – My feet are hurting by now, and I’m tired enough that I even forget to take pictures of the outside of the stores. I get to another Sofmap store, but the result is the same.

The big red sign means “wait for the next shipment.”

At this point, I had visited most of the shops I know about, and it was time to give up.

I found out that it’s actually pretty easy to find Switch units for sale in Akihabara, but many are second-hand, and all are massively overpriced.

If you want to find a new Switch console at its base price of 29,970 yen plus taxes, it becomes almost Mission Impossible. Every shipment at major retailers sells out fast, while smaller ones apply large markups taking advantage of the shortages.

The only hope is to walk into a store the day a shipment arrives, but that’s rather unpredictable and store clerks aren’t very willing or able to share. Those who did respond, mentioned that even they don’t know for sure.

Of course, different locations in Japan will yield different results, but In nearly four weeks in Tokyo I have not seen a single Switch for sale at its base price. I’m sure there have been shipments, but I missed them, and they evaporated quickly.

It’s hard to gauge how much unsatisfied demand for Nintendo’s new console there is, but it’s doubtless that the shortages aren’t fully addressed just yet.