For the past few years developer Niantic has held Pokemon GO Fest, its annual worldwide gathering for its massive mobile hit Pokemon GO. With a variety of different in-game challenges and activities, alongside the opportunity to catch rare Pokemon, the sense of community and collaboration that Pokemon GO Fest has fostered has turned it into one of the biggest events of the year for Pokemon GO players.

Of course, that sense of community and bringing players from around the world together was challenged pretty heavily this year in the wake of the coronavirus pandemic. For a game so heavily focused on social interaction and exploring different areas in real life, the unique situation of the COVID-19 pandemic preventing and outright cancelling in-person gatherings and events made the prospects of being able to hold a traditional event difficult, if not impossible for Niantic. However, despite the restriction of not being able to bring thousands of players together in location this year, Pokemon GO Fest 2020 instead transitioned to being held virtually for the first time in four years.

While traditionally Pokemon GO Fest has been held in areas such as Chicago’s Grant Park and other locations around the world, this time around Niantic had to aim for something different by making Pokemon GO Fest accessible to every player around the world. While this year’s event was clearly a big change for a lot of players that may have attended in the past, for the most part, Niantic’s shift in format paid off and made Pokemon GO Fest 2020 a much needed community event at a time when playing together is largely impossible right now.

For this year’s installment, Niantic made Pokemon GO Fest 2020 a two-day event that was held on the weekend of July 25-26, 2020 which players could access by purchasing a ticket for $15 through the in-game store. On both Saturday and Sunday of the event, new Challenges and scenarios were introduced that gave players Research tasks to complete in the game, alongside the opportunity to catch a ton of different types of Pokemon. In particular, each day of GO Fest 2020 had a special theme for players to ensure that there was always something new to come back to, especially with its variety of Challenges to complete for in-game rewards.

The first day of Pokemon GO Fest 2020 in particular felt like the most successful of the weekend, which saw players explore a rotating set of habitats and specific Pokemon to catch in every hour with accompanying tasks to complete. Rotating between themed habitats such as Fire, Water, Grass, Friendship, and Battle, this gave the perfect opportunity for players to check in and catch specific types of Pokemon that they were looking for. On top of that, Pokemon GO Fest also featured hourly Global Challenges that gave the opportunity to complete tasks with other players from around the world to unlock special bonuses, such as increased Stardust, XP, or Candies from catching Pokemon. While the tasks themselves were fairly simple, such as catching a certain number of Pokemon or participating in a set number of Raids or Battles, there was still a sense of feeling like every player was working towards a common goal. Combined with the different themed habitats on Saturday, I easily spent a good portion of that time checking in throughout the day to see which Pokemon would appear every hour that I could catch and wanted to come back for more.

For the second day of the event, Sunday saw Pokemon GO Fest being taken over by Team Rocket, where players could battle various Team Rocket members and work their way up towards battling its leaders Arlo, Cliff, and Sierra. Along the way, the second day of Pokemon GO Fest 2020 also focused more heavily on giving players the chance to catch Legendary Pokemon, such as the appearance of Shadow Mewtwo, the three Legendary Birds, and the weekend’s ultimate prize, the mythical Victini. While there was still ample opportunity to catch Pokemon throughout the day–I myself managed to snag a Shadow Zapdos among other big catches–personally I felt the second day of Pokemon GO Fest 2020 was a little less effective by focusing so heavily on the battling aspects of Pokemon GO. That said, if battling wasn’t your cup of tea, there was also the opportunity to participate in Remote Raid battles with free passes each day, giving players some alternatives to solely going after the Team Rocket Leaders.

Aside from the in-game components of catching Pokemon and battling, Niantic also delivered on trying to adapt the community elements of Pokemon GO Fest to work in a virtual setting. Specifically, Pokemon GO Fest 2020 had its own dedicated site where players could take a break from the action to check out its “Virtual Lounge,” which featured a rotating selection of special videos and livestreams, giveaways, and a chat to engage with other players. The site also featured live feeds from the game’s Twitter account for updates and news, while also highlighting photos and screenshots from other players around the world throughout the weekend. One of my personal favorite touches for Pokemon GO Fest 2020 was Niantic’s collection of downloadable print-at-home decorations, including papercraft PokeBalls and Gifts, a Pikachu visor, and even life-size cutouts of the Team Leaders Spark, Blanche, and Candela.

Though obviously one of the biggest draws for Pokemon GO Fest is getting to interact with other players from around the world, these social components of Pokemon GO Fest 2020 at least helped to deliver some aspects of that to players at home. While most of the time I was either playing at home or while I was walking around outside last weekend (which wasn’t a ton given how hot it was in my area at that time), checking in on the website to see the latest updates or catch some of its livestreams felt like a nice break from the action and to engage with the game’s community at large. Even if you couldn’t see other players face-to-face, Niantic’s solutions felt like a smart way to bring some of that larger community experience of playing Pokemon GO into players’ homes. 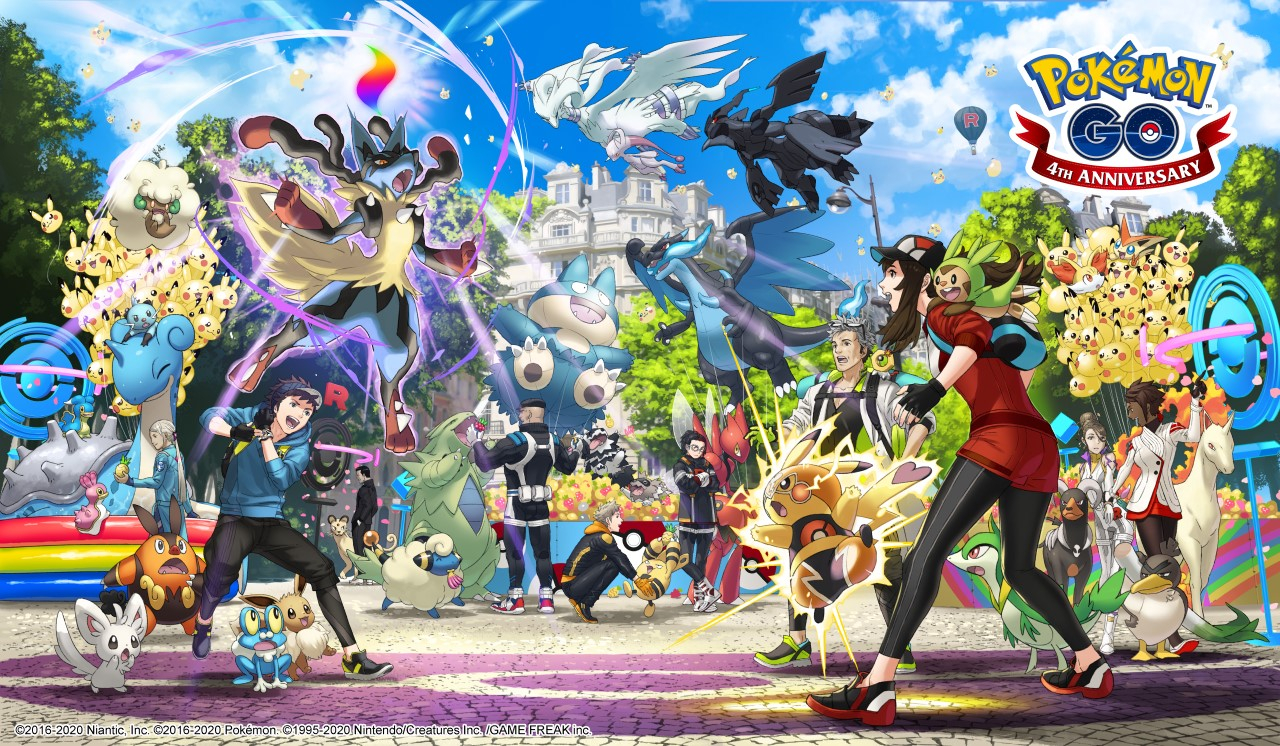 Given the huge challenges that the COVID-19 pandemic presented for Niantic, Pokemon GO Fest 2020 overall felt like a big success for the game’s community and for the game’s first virtual outing. Though there were a few technical hiccups along the way–in particular I ran into issues trying to access my friend list to share Gifts–for the most part Pokemon GO Fest 2020 delivered an opportunity to catch a ton of different Pokemon and collaborate with others around the world in the Pokemon GO community. Given that this was technically my first time experiencing Pokemon GO Fest, hopefully Niantic’s experiences with GO Fest 2020 can show that a larger opportunity exists for players to participate around the world if GO Fest 2021 can happen in-person next year. While obviously that’s dependent on what the state of the world is in due to the pandemic, Pokemon GO Fest 2020 still managed to bring an exciting sense of community to players around the world and a much-needed escape for the weekend, which is something we all surely needed right now.

The post Pokemon GO Fest 2020 Was a Big Change But a Worthwhile Virtual Adventure for its Community by Ryan Meitzler appeared first on DualShockers.