Gust is a developer who doesn’t seem to want to be known for continuously building off of the same Atelier IP forever. More recently, the developer has chosen to expand their focus onto new IPs in different genres, but still they all seem to have that Gust charm. Fans of the developer know what to expect, attractive girls, a premise that becomes much bigger after the first hour, and most importantly RPG elements.

Don’t get me wrong, I’m not complaining, I think Gust works hard at delivering new and intuitive features to their established IPs time and time again, but that’s what makes it so not like them to create an action RPG like the Nights of Azure series. However, after playing Nights of Azure 2: Bride of the New Moon, I really think the studio has found a good grasp on the action RPG genre and I’d really like to see them continue with it.

Nights of Azure 2 is better than its predecessor in many ways. Mainly, the story is much easier to grasp as it takes time to establish the characters and setting before giving the player full control, which I felt was lacking in the first entry of the series. Nights of Azure 2 begins by introducing the main protagonist, Aluche, as a newly dubbed knight of the Curia. After returning home, she is faced with her first task of sacrificing her best friend, Liliana, who has just became the “Bride of Time”, the title given to whoever is to be sacrificed to the Moon Queen.

Incidentally, things don’t go as planned and Aluche meets a terrible fate at the hands of the Moon Queen and awakens later to pick up her mission where she left off. The only trouble is that Lilian is missing and must be found to complete the ritual and save the world. Additionally, a different group of individuals are also looking for Lilian, but are fully intended on keeping her alive without resorting to a human sacrifice.

“I applaud the localization team for keeping the humor and emotion of the scenes intact.”

The mental tug-of-war that Aluche is put through is seen in multiple scenes as she struggles to decide who’s side she is on. True, the Curia are the ones who brought her back from her demise, but no part of her wants to go through with sacrificing her friend. She plays both roles to members of the respective groups in order to gain their help to fight back the fiends and find Liliana.

A lot of the events and story scenes focus on Aluche and developing relationships with the other members of the group. Coincidentally, as more girls, called lilies in the game,  join the party, gameplay shifts to spending time on learning about them and their reasons for joining the cause. I appreciate how Gust continues to take their time with characters and establish their personalities, but it does slow down the action at some points, which I didn’t mind because a majority of these characters are worth getting to know.

Also, there are many moments between characters that make you question their sexuality, even moreso when you gain enough affinity with a character to trigger their one-on-one events. Whether it’s them checking out each other’s bodies or watching Aluche almost have a heart attack because she’s aroused, there are quite a few memorable moments between characters and I applaud the localization team for keeping the humor and emotion of the scenes intact. 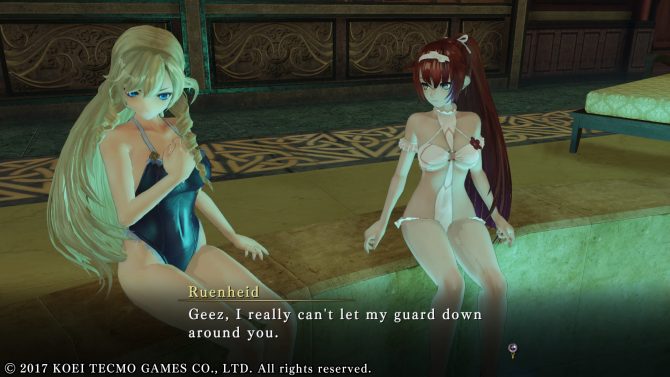 “Gust graciously gives enough time to complete every quest and handle other business before having to continue the campaign.”

In Nights of Azure 2, Aluche and her party will stay a hotel and players will have a list of quests that they can choose to participate in, some are mandatory and others are strictly for gaining affinity with the lillies. There are various types of missions available where the story missions provide the most variety in terms of gameplay, but you also have typical monster hunts requests and “clear out this area of these monsters” quests.

The game does have a time limit given to the player every time they step out of the hotel. I feel like this was mainly to slow the amount of level grinding the player can do in the earlier portions of the game, but it also adds a layer of difficulty and planning out how to complete every quest in the least amount of trips out of the hotel.

You see, Aluche is still weak and can’t push herself too hard without having to sleep. However, the game itself has a timer represented by the new moon, where if the moon disappears then it’s Game Over. Each time a player sleeps the moon grows darker, but certain quests will reverse this action. I’m usually one to loath time limits in games, but Gust graciously gives enough time to complete every quest and handle other business before having to continue the campaign. However, there were moments where I came close to seeing the full new moon and had to make sure not to screw up any quests moving forward. 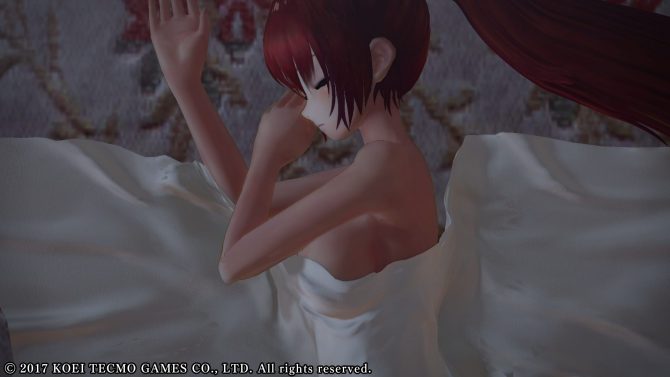 Fighting monsters in Nights of Azure 2 feels similar to another Koei Tecmo IP, Warriors All-Stars. Coincidentally, I really enjoyed that game’s battle system. Players will use two buttons to chain together weak and strong attacks and unleash them onto enemies. The combos and abilities far exceed what was present in the first game and was more in tune to what fans of the musou series would expect.

Additionally, when fighting, certain criteria can be met that will increase the gauge of your Lily partner. When full, players can unleash powerful attacks (reminiscent of musou attacks) against surrounding enemies. Also, each Lily has a special attack that takes a bit longer to charge up but causes massive damage against anything in their way.

I didn’t feel like the fighting became tedious or repetitive throughout the campaign. This is mostly because I took time to level-up my character constantly to keep the gameplay fresh and add to the list of things I can do in combat. However, there are moments when fighting felt a bit mindless and easy, but then you encounter a strong enemy or a boss that puts your skills to the test. These difficulty spikes aren’t too common, but it’s something that I had to keep cautious of because dying in battle means losing a full day. 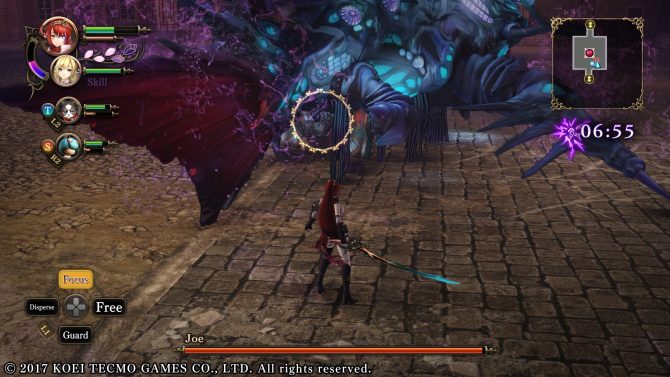 One of the best features of Nights of Azure 2 is the party that players can put together before heading out into the field. Aside from choosing a Lily, players will be able to bring 2 additional demon companions called “Servans”. These demons are found throughout the game and have unique abilities and skills, such as, elemental magic attacks or turning into a weapon. Completing certain quest will reward the players with pet skill points that will be used to level them up. This also opens up the options to evolve the pets and make them stronger.

I was pretty addicted to leveling up my pets and switching them in and out of my party to find the strongest combination. Also, there are some areas of the map that can’t be accessed without the proper magic ability so it’s good to always choose a magic pet to travel with along with a weapon pet. The weapon pets are rather strong and mostly come in hand when going up against a group of strong enemies. 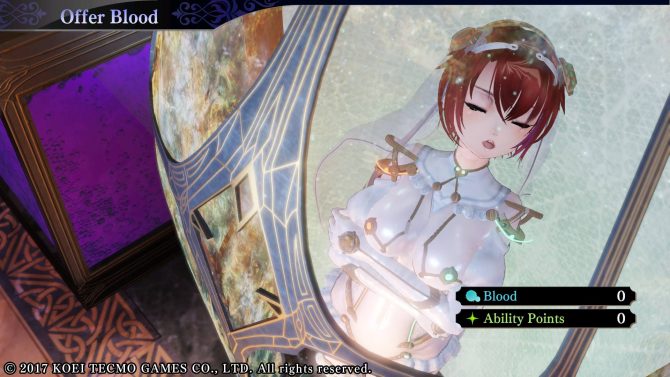 Other features of the hotel include leveling up Aluche and her various skills. By using Blue Blood taken from defeated enemies, Aluche can level up and become stronger. Leveling up Aluche is crucial because it adds to the time limit that she’s able to stay outside. Furthermore, skills can be upgraded to add elemental damage to her attacks as well as make her stronger. 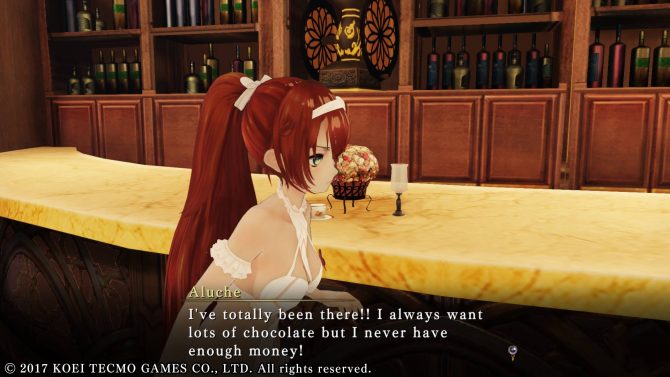 With themes of love, friendship, and loyalty, Nights of Azure 2: Bride of the New Moon gives Gust fans exactly what they crave in terms of character and story development. Sadly, the game might not make that same impact of fans of the action RPG genre who would expect a more complex combo system and layers of character customization. That said, the game has many memorable scenes and characters in a story that gives the player motivation to see the ending of Aluche’s adventure.

I enjoyed the new battle systems and all of the additional features that Gust added to Nights of Azure 2. However, it’s clear that keeping the action fast and the frame rate stable were the developers biggest concerns and it shows in the forgettable environments. Thankfully, there’s too many good features about Nights of Azure 2 for fans of Gust to not pick it up, while at the same time introducing new players to the developer. As for me, I’m going to hope that they continue to support this awesome action RPG series and its casual yuri story plots.