FGO first launched in July 30, 2015 and is now celebrating its 5th anniversary with a new Mashu app. A special live stream was held on August 10 for the occasion, and it revealed the app as a surprise announcement as the stream ended. What’s interesting here is that only 550K downloads of the app will be possible. And once it hits that threshold, you’ll be unable to obtain it. It’ll be first come first served.

The new FGO Mashu app has no release date but it’ll be launching in the “next few days”, on iOS and Android. Being Fate/Grand Order‘s mascot of sorts as the first Servant and one of the most popular characters, Shielder / Mashu Kyrielight already had a similar app a few years ago. This one looks similar except she’s wearing multiple new clothes and she’ll have new dialogue lines by her seiyuu Rie Takahashi. It also looks to be linked with the Fate/Grand Order: Moonlight/Lostroom special anime from December 2017.

The teaser trailer for the new FGO Mashu app was uploaded on Twitter, you can find it right below: 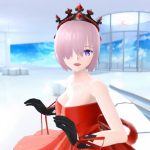 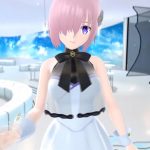 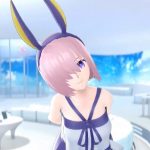 The outfit with the Nitocris ears is particularly cute.

FGO is one of the most popular games ever  in Japan, and is also renowned as the most talked about game on Twitter for multiple years. Most of this being Japan as Twitter is the biggest social media by far there. Only Animal Crossing New Horizons managed to surpass it, for now.

Type-Moon Studio BB recently announced a remake for Fate/Extra, celebrating the PSP game’s tenth anniversary. We detailed everything you should know about it in multiple articles here, here, here, and here.

We’ll be covering the other announcements from the FGO 5th anniversary live stream in a separate article coming shortly so stay tuned. Though I’m sure you already know them all if you’re into FGO enough to read this article in the first place.

The post FGO Mashu Is Back With a New VR App But Only For 550K People by Iyane Agossah appeared first on DualShockers.