It seems that the Neptunia franchise will forever be a part of our gaming lives. The series has been receiving multiple releases and spin-offs since it first launch on PlayStation 3 in 2010. Being as niche and obscure as it is, one would assume it wouldn’t make it past a sequel, but Idea Factory has instead doubled downed on the series and built a community of gamers who support the characters year after year.

Sadly for me, the Neptunia series has lost the spark that it once had with Hyperdimension Neptunia MK2 on PlayStation 3, which was the last one that I felt connected to. So with the series’ most recent entry, Cyberdimension Neptunia: 4 Goddesses Online, I found myself researching for that spark that made me such a huge fan of these characters before. Thankfully, what I discovered was a return to what I remember loving about this series and the joy that every second of the game has the potential of bringing.

Cyberdimension Neptunia: 4 Goddesses Online begins with a new kind of story that finds the Goddesses, Neptune, Noire, Vert, and Blanc, as beta testers for a new online video game called 4 Goddesses Online. Each character takes on a new character class outside of their comfort zone, which gives them some room to experiment with new roles in battles.

The beta version of the game has its own story where the Goddesses need to seek the help of four in-game Goddesses in order to put a stop to some approaching evil, super meta, I know. Although this first main quest of the game might seem shallow or out of place, the game really opens up after the first few hours and gives plenty of reasons to see the story through until the end.

This has been a huge problem for me with the previous Neptunia titles. I would start them and not feel compelled to finish them because I didn’t like the where the story was going or I become bored of the main plot. Cyberdimension Neptunia: 4 Goddesses Online approaches this Neptunia story in such a way that it gave them the freedom to create a new motivation through character dialog and world building. 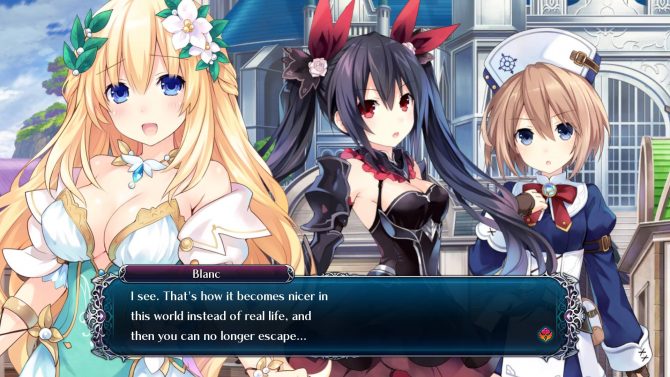 Cyberdimension Neptunia: 4 Goddesses Online’s progression is determined by completed quests. These can range from item collecting, killing a certain number of enemy types, defeating a boss, and so on. Thankfully, Idea Factory was smart enough to allow players to accept as many missions as they wanted to so that in one visit to a dungeon, it’s possible to complete an entire Guild ranking. Although this approach to organizing missions isn’t unique or genre changing, I felt that other systems were put in place to add a new layer of complexity that I haven’t seen in the series.

By taking items found in the field to certain stores, weapons can be upgraded to become stronger. I’ve used systems like this in entries of the Sword Art Online video game series, but Cyberdimension Neptunia: 4 Goddesses Online took a different approach and made it a bit more approachable, requiring less grinding for items and instead keeping the focus on the characters. 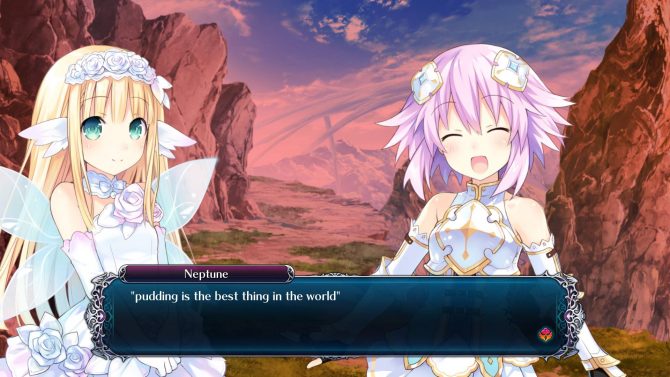 This brings me to why we’re all here, right? The characters. Neptune completely steals the show in Cyberdimension Neptunia: 4 Goddesses Online story. Constantly, she will break the fourth wall or pause a conversation to better explain something that was just said. The only issue is that everyone hears her during these pauses and questions why she just interrupted them to explain something.

I absolutely adored the writing and found myself laughing at the often awkward situations these girls find themselves in. It’s a compliment to the localization team at Idea Factory International for keeping the personality and mood in the conversations for a comedic story like this, which kept me engaged for many hours. 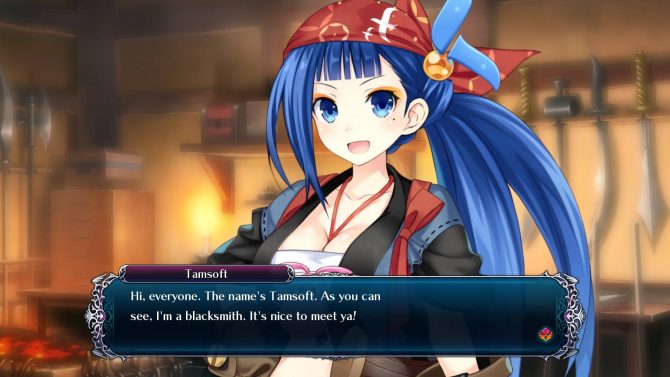 During stops to the main town, chibi versions of characters can be found standing around with exclamation marks above their heads. These events will appear during the campaign to offer more witty and often hilarious conversations between characters as well as provide some optional CG events that wouldn’t be seen otherwise.

Moments like these between the characters are what drives this series home. As the core gameplay changed from turn-based RPG, to SRPG, and action RPG, the element that binds it all together are these moments of interaction between the cast. Cyberdimension Neptunia: 4 Goddesses Online continues this, but takes the opportunity to address gamers that are new to the series by explaining motives and relationships with a genuinely humorous approach. This even helped me a lot with catching up with some of the newer characters that I didn’t know much about. 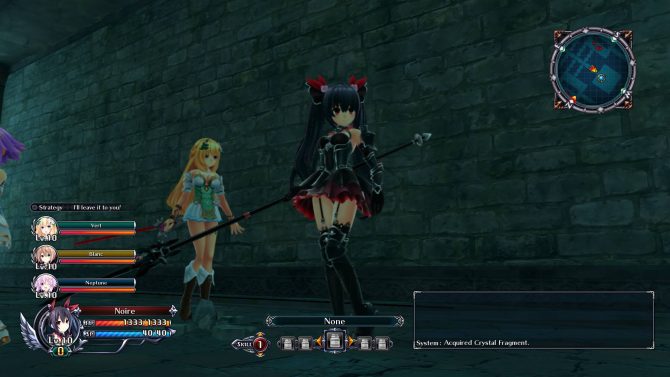 After accepting a quest, you can make your way to one of the dungeons. These dungeons start off rather small, but over time become larger and offer different enemy types and ways to explore. The fighting in this game can feel repetitive at first, but after pushing through the first couple hours more skills become available and there is a larger range of actions that character can take in battle.

Every character can be used differently and that’s a good thing because it gives the player a choice about how they want to approach the game’s combat. For example: Neptune and Noire can get up close and use some powerful skills to defeat enemies, but they’ll need to use the block command often because they’ll be putting themselves in danger. On the other hand, Vert and Blanc can attack from afar and use magic-based skills and support magic to get the job done, but they might not hit as hard with melee attacks. 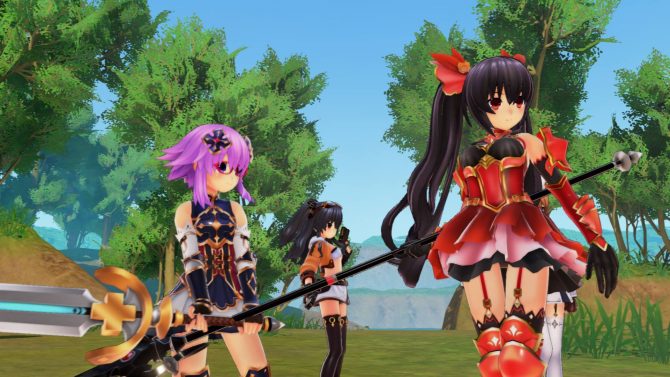 Finding a personal balance with the game’s battle system is key having a good time. With the inclusion of the CPU candidates, there wasn’t a lack of versatility when satisfying the way I wanted to go into battle. Although I did have my favorites. Additionally, for those who were wondering, the Goddesses’ panties can be seen a lot throughout the game, in CG events and on the field. I felt this was okay because it’s not really them and instead just avatar versions of themselves.

Cyberdimension Neptunia: 4 Goddesses Online takes a lot of cues from popular MMOs where a few field enemies, although they might be low level, have high HP. So be prepared to surround large enemies and attack with all your might, but blocking and healing also play a huge factor of the game’s battle system. A well timed block (with a generous execution window) will allow for a follow up parry attack. 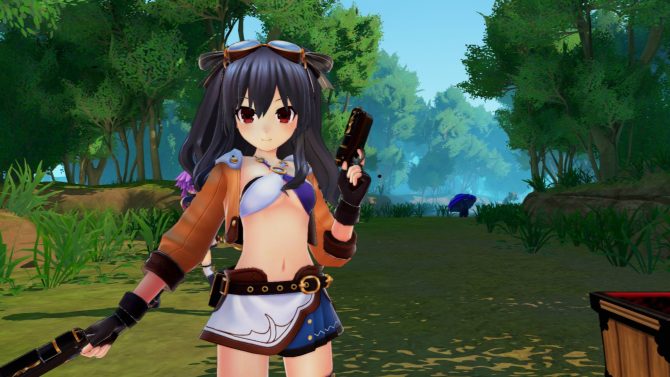 In the start menu of Cyberdimension Neptunia: 4 Goddesses Online, players are also able to customize their characters as they wish. Chests can be found on the field map that provide equipable items and other customizations to the series that we haven’t seen before. Some items are silly like an egg, but some are more important like glasses which brings the Goddesses’ to a whole new level of attractive.

Equipment can be found or bought and offer some pretty large stat boosts to the characters. I wasn’t able to afford most of the items in the earlier portions of the game, but they become more important when facing tougher enemies later on. Additionally, new costumes can be found to change the look of the Goddesses’ and their theme. 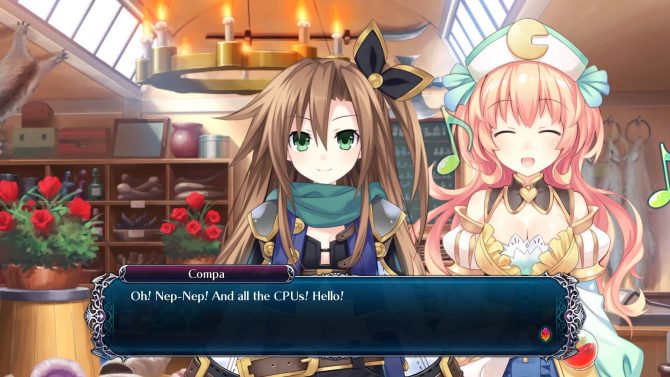 Cyberdimension Neptunia: 4 Goddesses Online is the first game in the series to use Unreal Engine 4 and I think this is a huge step forward in the graphics department. The environments are varied enough to satisfy my itch for exploration and the free camera mode allowed me to take cool pictures of the girls on the field after changing their costumes.

One downside is that the event scenes went back to static images instead of using an emote system. This isn’t so bad, but I would have liked to have seen the characters wearing the items and costumes that I put them in during the events, instead of just illustrations. Aside from this, the game has a fairly long loading screen before the game starts. This cuts down on loading during gameplay, but I thought the game had crashed as I was staring at the slowly moving loading bar. 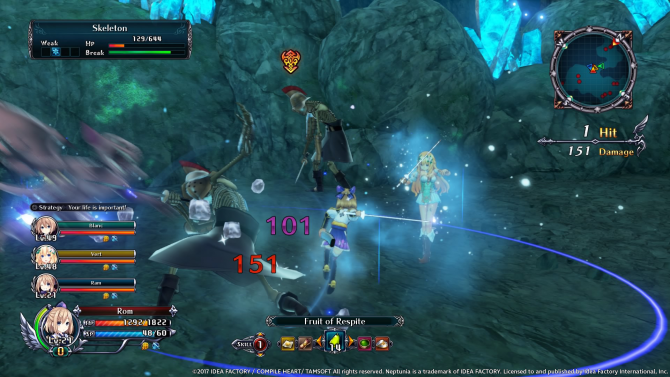 Cyberdimension Neptunia: 4 Goddesses Online came out at the right time in my life to give me the gaming experience that I didn’t know I was craving. A slice of life approach to storytelling with a cast of characters that I’ve had the honor to see evolve over the past seven years. Aside from taking on missions and wrecking thousands of enemies, the story and characters drive this game forward which is important because there is a lot of story here.

Cyberdimension Neptunia: 4 Goddesses Online made me excited for this series’ potential again. I took a break and came back to find that, outside of Unreal Engine 4 graphics, the biggest changes were in gameplay and story progression, but the cast of characters, which I feel is the heart of the series, is better than ever in this entry. With solid controls, a variations of quests, multiple dungeons to explore, and many hours of items collecting and level grinding, Cyberdimension Neptunia: 4 Goddesses Online will provide that Nep-tastic adventure that fans have been waiting for while at the same time slowing down in certain parts for new fans to jump in and acquaint themselves with the Goddesses.