Recently, we were able to go hands-on with the upcoming action RPG Assassin’s Creed Origins at a preview event in San Francisco. We played almost four hours of the game and came away with a positive impression from our time with it.

While at the event, we were able to sit down with Jean Guesdon, the Creative Director of the game to talk more specifically about the added year of development that Origins was given as well as discussing some of the biggest changes to the combat and the multitude of new RPG elements that the game boasts.

Logan Moore: I really enjoyed the 3 hours that I’ve played of the game so far. The one thing that has stood out to me while I played was just how polished it is. Notoriously, your team had an extra year of development to work on Assassin’s Creed Origins so how beneficial was that extra time to get the game to where it is right now?

To create such a big world that is also dense and filled with lots of content, the extra year was definitely needed.

L: How early did your team know that you would end up having that extra year of development?

JG: We knew way before it was announced. The mandate with Origins was really to modernize the franchise and refresh it while still remaining true to it. We don’t want to lose our fanbase and we know that millions of people like Assassin’s Creed, but we knew that we needed to modernize it to bring it to the next level. With such a big mandate and such a big setting, we knew quite early that we would benefit from that extra year.

L: Since Origins is chronologically the first game in the series and the story centers around the creation of the Brotherhood, is your team internally viewing this as a sort of a relaunch of the franchise? Everything I’ve played so far feels really fresh and different from the other games in the series.

JG:  That’s really something we wanted to bring with Origins — a fresh experience. We are the team that brought you Black Flag four years ago and what I was really happy about with that game was how we found a balance between it being a true Assassin’s Creed game while also making it a true pirate game. Assassin’s Creed fans felt at home already but those who were coming for the pirate experience got it as well. We really wanted to bring that into Origins and push it even further.

The fact that we are going back in time prior to the original Assassin’s Creed for the very first time and the fact that Origins is launching on the tenth anniversary of the franchise, all of these elements converge to send this message that we still have a lot of things to say, show, and tell to our players.

L: I want touch on the combat in Origins a bit because I think it’s possibly biggest change in this year’s game. How long did it take for you to settle on this new system and why did you decide that Origins was the time to make the change?

JG: We know our franchise and we know what is needed. We likened Origins to AC2 in which we relied on three main pillars — combat, narrative, and exploration. With each of these pillars, we wanted them to be refreshed to enhance the overall experience.

For navigation, you’re able to climb everywhere while being able to swim and dive everywhere. Narrative, we wanted to come up with a much more balanced experience between the exploration of the world and strong narrative. This is why we moved to a quests system, allowing you to have multiple stories.

For the fighting, that was something we wanted to address from the beginning of development. We thought that the previous system was good when it was originally launched, but every iteration of AC just tried to iterate on it and add something new. Now, we felt like it was time to create something new and different. Not just changing moves or adding difficulty, it was more of a high-level philosophical change that was needed.

We wanted different combat to support the global experience of Origins in the sense that we wanted to give more freedom to players, and we wanted them to be in charge of their own personal experience. Pick up the quests you want, finish them if you’d like, etc… With combat we wanted to have more options, more weapons, and more ways to play to help you create the Bayek you want to be.

L: You mention the three pillars of Origins being combat, exploration, and narrative, but if it were to have a fourth pillar I’d really say that it’s the overhauled RPG mechanics that you’ve put in the game. Assassin’s Creed has always had RPG elements to it, but you’ve definitely leaned harder into making Origins a full-fledged RPG where past entries have not. What made you and the team decide to go in that direction?

JG: That’s a really good point, actually. We really could consider those elements as the fourth pillar. This was a decision we made quite early and was the result of our self-reflection. It was all about bringing more freedom to the players and making them be in charge of their own experience.

I mentioned before how you can pick up a variety of quests and play them in any order you like or you can try challenges that are too high level for you just for the sake of trying them. All of this just made sense because it was answering the need to be less rigid and less static.

One of the things I told the team was that, “Assassin’s Creed Origins needs to be more fluid, more dynamic, and more modern than the previous ones.” It required a lot of work to overhaul big systems, but all of this was done to bring more capacity to the player and allow them to play how they want. To me, this is a good definition of ‘RPG’.

L: You’ve briefly talked about some of the side quests and other additional challenges that will be available in the world outside of the main story. I’ve already seen some of the more narrative-centered side quests in my time with the game today and at E3 I played a section where I fought waves of enemies in a coliseum. What other kind of missions can we expect in Origins?

JG: Yeah, we have a lot. You mentioned the quests that are more narrative and showcase the life of Egyptians at the time. In terms of gameplay though, we’ll have two gladiator arenas. I’m trying to remember the others that I’m allowed to mention. (laughs)

There’s a ton of other activities that are more centered on exploration such as tombs, pyramids, and other secret locations. Hideouts and camps are also around and contain things you can destroy or steal. One feature that I really like a lot is the stone circles which we learned about while researching Egypt. They’re objects connected to the constellations.

Another enemy we have are bounty hunters who inhabit different regions of the game. If you pass by these guys, be careful because they are really powerful. They’re all different from one another and have different personalities and names. Unique bosses like these and the ones in the arenas are one of the cooler things about Assassin’s Creed Origins. There’s plenty of stuff to do and a lot of endgame content. 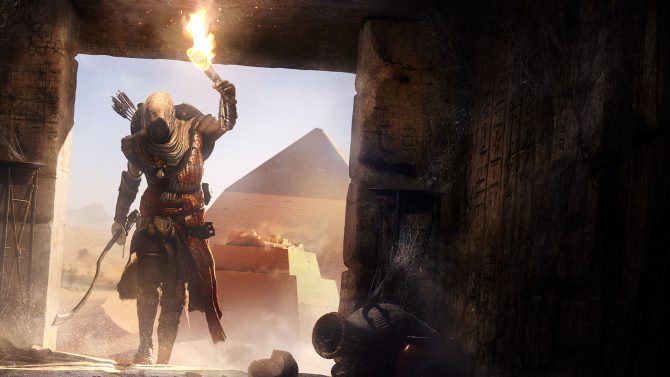 L: One of the things I really liked from past AC games — specifically Brotherhood — involved recruiting other people to join the Brotherhood. Since Origins goes back to the start of everything, are you able to recruit new assassins to join you?

JG: Not yet, no. It’s really about explaining the origins of the Brotherhood and talking about how it came to be. We also reveal how many of the iconic elements that have been present since AC1 such as the cut-off finger, the importance of the eagle, and the tenets and the values of the group. It’s really the story of Bayek and his journey towards the founding of the Brotherhood.

L: Let me ask you about some technical things for a moment. We reported a rumor earlier this month that you were potentially trying to run the game at 60 frames per second on Xbox One X. When we reached out to you for a comment you told us that Origins’ frame rate hadn’t been locked yet. Is there anything further you could tell me about your plans for that platform?

JG: What I can say is that we’re pushing the hardware to make the best possible experience. We have this cool system called Dynamic Resolution Rendering which means that the most important thing is the frame rate. Frame rate is what will always be prioritized by the consoles to keep the fluidity and reactivity of the experience with the resolution being adapted if needed. It’s done in a very smart way and our engineers worked a lot on it to make sure that it’s optimizing the rendering to happen where you aren’t looking. Most of the time when this happens, you won’t even notice. This was important for us to secure the best possible experience with a very steady frame rate.

L: So this is a question I ask almost everyone that I interview, but what’s one thing about Assassin’s Creed Origins that you might not have talked much about to the public but you’d still like to stress?

JG: What I’d really like people to know and to understand about this game is that it’s for them. It’s beautiful and very welcoming world that we’ve made and the content within is so varied. Whatever your play style might be, this game is for you.

Assassin’s Creed Origins is due out next week on October 27 for Xbox One, PS4, and PC. Keep an eye out for our review around that time.