This past week, I was flown out to Poznan, Poland by indie developer Robot Gentleman to check out the Poznan Game Arena and GIC, the biggest gaming conventions in Poland, and play their recently revealed 60 Parsecs! just after it was announced. 60 Parsecs! serves as a sequel or spiritual successor of sorts to Robot Gentleman’s previous game, 60 Seconds!, moving the game’s setting from a fallout shelter after a nuclear apocalypse to outer space.

The game still boasts the cartoony graphics and personality that 60 Seconds! had, along with some more fleshed out mechanics such as crafting. While I was only able to play a few short runs of the survival portion of the game at the event, 60 Parsecs! still managed to very charming and funny with the wacky situations I got into.

While the final game will have a scavenging portion like 60 Seconds!, it will now be in 2D and according to the developers, will put an emphasis on strategic planning which may remind players of something like Don’t Starve. Unfortunately, Robot Gentleman was not showing it off at this event, but the concept itself still sounds intriguing. I had to choose a Captain before starting the demo, and could be either Emmet (a scrawny black nerdy character with high intelligence) or Deedee (a more balanced blond donning a stereotypical 50’s polka-dot hair ribbon).

While I had the chance to play with both captains, I did perfer Emmett — I found his high intelligence led to some more interesting options. As my game begun as Emmett, I was already on the spaceship with somewhat ample amounts of soup and water for myself and my three crewmates,  Deedee, Maegan (an old lady), and Baby (a dumb strongman). The first day or two functioned very similar to 60 Seconds! I could check my monitor and get text-based updates about what went on the past day.

The writing is still darkly comedic and funny like the original, and some weird situations will pop up for players to solve with the limited number of items they have on hand. These micro-problems kept each day interesting, and I could see them becoming really stressful once you are low on supplies, especially if it can turn the tide of a certain crew member’s emotions towards you.

The game’s artstyle is also very vibrant and colorful, helping the more whimsical side of this era of sci-fi pop. While the lack of a being able to double-click within the game’s menus felt a little weird at first, especially considering the more computer-based aesthetic of the menu’s, the game is still early in development, and Robot Gentleman said that they would take the issue into consideration going forward when I brought it up to them.

Players must also micromanage their crew, keeping their hunger and thirst down, and their sanity and happiness up. Players can use the sock puppet, which players from 60 Seconds! will recognize, to keep their crew happy, and feed them soup and water to keep their more basic needs satisfied. Ignoring any of these can lead to characters getting sick or infected with alien diseases, which can permanently kill and remove them from your team.

While I wasn’t able to test the system out too heavily, 60 Parsecs! features a brand new crafting system, which should make it easier for players to craft the items they need on the fly in later portions of the game. Players can also go on text-based expeditions as they traverse outer space, which can garner you new items and can lead to some more witty dialogue.

One of the other new big additions to the game is that player’s can now travel to different sectors of space throughout the day. Every day, players have the option to travel to new areas, which are divided into low, medium, and high risk, and can give players access to new items and story situations. 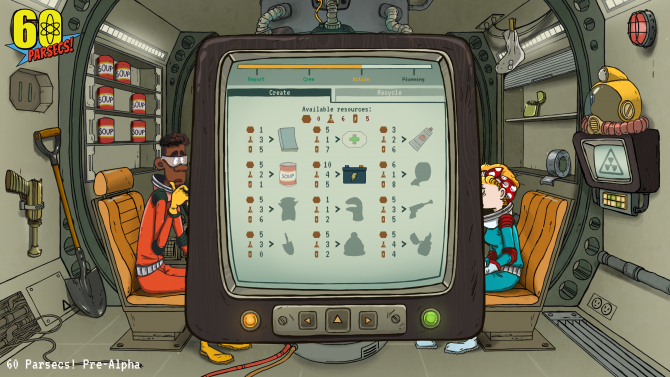 In this particular run, I encountered Xontar, and evil alien ruler that wanted me to submit to his every whim. Being one of the last bastions for humanity, I wasn’t going to give up so easily. On my first run as Emmett, I was able to use my high intelligence to outwit and defeat him, ending the demo after about 10 in-game days, with only Baby being afflicted with some weird alien disease that caused testicles to grow out of him

My run with Deedee as Captain was much more interestingly though. Her intelligence wasn’t as superior to Xontar’s as Emmett, so the fight with him was longer and drawn out. A couple of my crew members got infected with a weird technology-based disease, while Deedee was only able to subdue Xontar by chance on her last sliver of health.

This amount of unpredictability may be frustrating to some, but I found it to keep the few campaigns I played interesting. The final version of 60 Parsecs! will also have more randomized story missions to experience, so players trying out the final product may have a much different experience with their crew than I had in this demo. 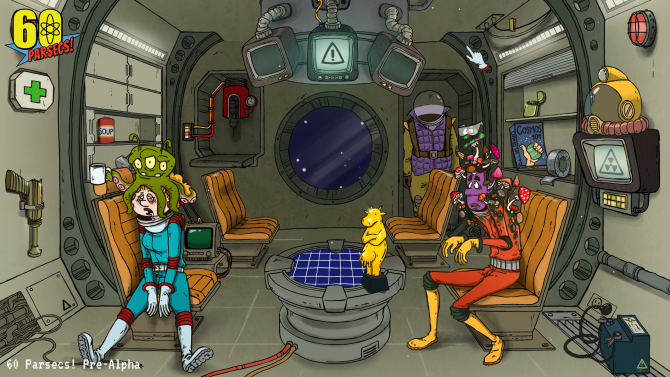 From what I played, 60 Parsecs! seems to be an ample improvement over 60 Seconds! in what I find to be a more interesting setting. While I was only able to try out a small portion of what will be in the final game, the systems that are currently present seem promising; the addition of travelling alone seems like it will add a ton of welcomed replayability and player choice to 60 Parsecs!. I definitely can’t wait to see how the reworked scavenging sections will function, but there is no need to worry about the quality of the survival sections, as from what I played, 60 Parsecs! looks to be more enthralling than 60 Seconds! in both visuals and gameplay.

60 Parsecs! is currently poised to launch on PC and “major consoles” sometime in 2018. If you want to learn more about 60 Parsecs!, you should check out our interview with the game’s Game Designer Radek Smektała and Art Director Juliusz Zenkner.