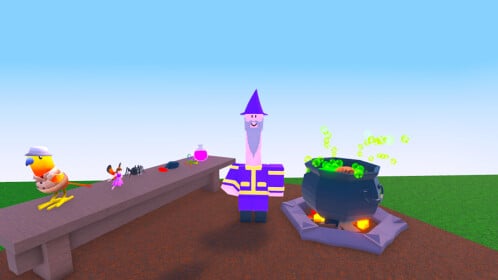 Wacky Wizards new Easter Eggs update is now live on all platform servers, adding a new ingredient and a bunch of new potions that you are now able to craft.

Roblox is the home of creative developers who want to deliver the wildest dreams without any big budget.

Wacky Wizards is surely one of the most successful games on the platform that many players gather around every week in its servers to celebrate the launch of a new update and discover all the new things added to the game.

This week’s update in Wacky Wizards is called Easter Eggs or Secrets and it brings in more than one ingredient, unlike the previous updates. Below, you can check out the potions list for the update up to this point. We will update the list as soon as new potions are discovered.

Up to this point, no premium potions have been discovered, which could mean there wouldn’t be premium ingredients in this new update. However, we still need to wait for it as the update is only out for less than an hour.

Wacky Wizards is now available for free on Roblox. You can get access to Roblox through Xbox One, Xbox Series X, and Xbox Series S consoles. It is also available on PC, Android, and iOS.

Keep in mind that you will need a Roblox account to be able to play all the games of the service.