I like to think that I am a patient individual. Unlike my adolescent self, if I am having a hard time with a particular section of a game, I just shrug it off and learn from my prior mistakes. It was not until I booted up the Reikon Games developed cyberpunk twin-stick shooter, Ruiner, where my patience was tested for the first time since those pubescent years.

From the beginning, two things about the game are apparent. First, it has a whole lot of style. The dystopian cyber city of Rengkok has the right amount of dirt, neon, and arbitrary Japanese characters that is reminiscent of cyberpunk films such as Blade Runner or Dredd. The cyborg inhabitants of the grimy city are uniquely designed offering something new yet familiar from the science fiction genre.

Second, Ruiner is excruciatingly tough with indiscriminate difficulty spikes throughout the entire experience. Most notably, the first boss in the opening mission — mostly due to the unfamiliarity with the game’s controls fused with the challenging gameplay — and another boss near the end. It feels as if it was designed to irritate even the most competent players.

“First, it has a whole lot of style. The dystopian cyber city of Rengkok has the right amount of dirt, neon, and arbitrary Japanese characters that is reminiscent of cyberpunk films such as Blade Runner or Dredd.”

While the game poses a challenge, the gameplay is quite simple. Players will take control of the game’s protagonist, Puppy, as he is guided by a mysterious woman to find his brother through multiple corridors which inevitably leads to a large empty room. As you enter, the gates are blocked with only one way to open them: To destroy everyone who opposes you.

Right as you enter these areas, you are instantly greeted with an overwhelming amount of enemies that will kill you with ease. I wish I could say there is some strategy to surviving each wave, but every successful encounter felt like it was accomplished with dumb luck. There was hardly a moment where I felt my victories were a testament to how proficient I was. Each encounter felt like I stumbled instead of strutted into victory.

“I wish I could say there is some strategy to surviving each wave, but every successful encounter felt like it was accomplished with dumb luck.”

Ruiner controls similarly to most twin-stick shooters. If you are playing with a controller, the left stick controls Puppy’s movement while the right stick dictates which direction he aims. Pulling the right trigger will shoot your ranged weapon while pressing the right bumper switches to melee combat. All of this seems pretty standard, but the game’s mechanics are too slow and loose for the fast-paced action shooter. For example, if I’m getting bombarded by enemies from every angle, I ‘d like the ability to attack the opposition on my front or on my back instantly. However, your character has to turn his body a full 180 degrees to aim before he can shoot someone behind him. The amount of time it takes to turn around and aim was typically the difference between life and death. Implementing faster and tighter mechanics would have improved the experience overall.

The weaponry found throughout each level helps with overcoming some of the mechanic’s shortcomings. While Puppy comes standard with a lead pipe and a pistol with infinite ammo, a plethora of guns and melee weapons are available to use against your foes. From auto rifles, to energy blades, to mini-guns, each armament is readily available to use. Some do elemental damage such as ice — which freezes opponents to instantly destroys them with the swing of a sword — or fire — which will cripple them over time. I found that any weapon that continuously fires until its ammo is depleted, such as the flamethrower or the energy-based Xaar were the most effective. Shotguns were a second favorite.

As you progress through the dimly lit hallways and rooms of Ruiner, Puppy will obtain Karma — the game’s version of experience — to level up and upgrade points to allocate on a skill tree. Thematically, the act of swapping enhancements on the fly make sense in the cybernetic world, and also aids you when certain skills seem more useful than others. Some abilities are intrinsically more useful, most notably the healing mod. The front-facing shield that you garner in the beginning of the game is another worthwhile skill that will come in handy for a few boss fights.

“with each battle sequence a matter of life and death, there is always a sense of urgency that never leaves until the credits roll. After every encounter, I would finally exhale and laugh at my questionable survival.”

Like most games, when you begin Ruiner, you choose between a few difficulty options. The developer recommended level is Hard and is described as “brutal and merciless. For hardcore players only.” I took the cautionary statement in jest. Surely, the developers wouldn’t recommend an option that makes the game feel monotonous and joyless. It turns out they did, and after a few attempts to take down the first boss, I changed the difficulty option to Normal which is for people who are “up for a challenge” and “know what real fun is.” Even on this setting, I found myself scratching and banging my head on what seemed like the simplest of encounters. The “real fun” occurred when I finished each battle and was able to take a break.

The game does have enjoyable moments. The revenge plot, though straightforward and forgettable, is interesting enough to keep pressing through the painfully difficult gameplay. The characters introduced through the game’s optional sidequests also helps to flesh out the world. Unfortunately, more of these redeeming qualities are not as prevalent as they could be. 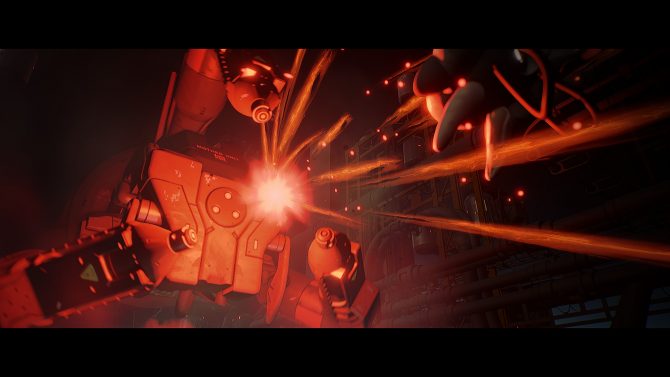 Additionally, with each battle sequence a matter of life and death, there is always a sense of urgency that never leaves until the credits roll. After every encounter, I would finally exhale and laugh at my questionable survival.

Ruiner is a fantastic example of choosing style over substance. The cyberpunk inspired world and straightforward tale will keep you interested for the eight to ten hours you’ll spend in Rengkok and its surrounding areas. Redeeming qualities such as the aforementioned environments and the constant sense of urgency, at the very least, will possibly keep you preoccupied long enough to see the game through.

However, when a game is purposely difficult solely due to the amount of overpowered enemies it can throw at you, it makes for an unsatisfying experience. This blended with clunky gameplay only amplified my disappointment. I would not be surprised if someone stopped playing twenty minutes into Ruiner with its uninviting gameplay.

Despite my outlook, if you’re a fan of dystopian sci-fi revenge stories, Ruiner may be worth checking out.