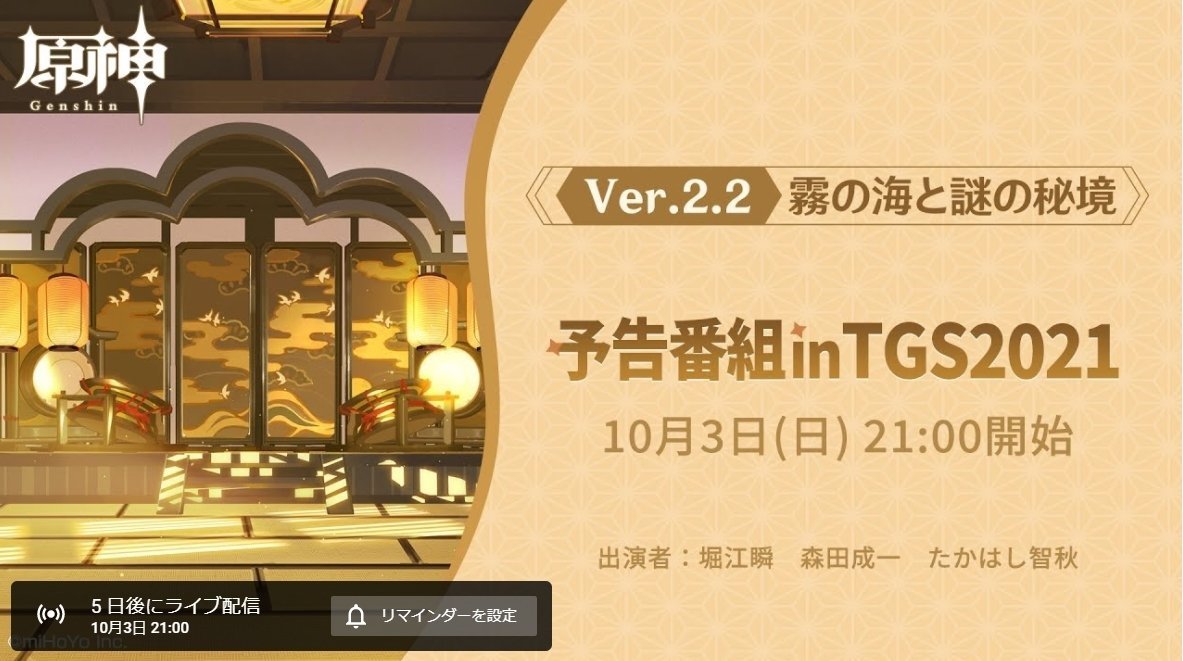 We have some new leaked details on the Genshin Impact TGS 2021 livestream, which is now confirmed to be one and the same with the Version 2.2 Sneak Peek livestream, where we’ll most notably hear about the future banner reruns, and get new Primogem codes.

miHoYo already announced that Genshin Impact will have a special Tokyo Game Show 2021 Livestream, to be held on October 3 at 8 AM EST. Click here for other time zones, and here’s a countdown. So this isn’t particularly new.

However, the stream’s YouTube page was published for a few minutes on September 28 before going private, revealing some of the contents of the presentation. Hence why we can technically say it was “leaked”.

The stream’s thumbnail was revealed. Confirming Genshin Version 2.2 is titled in Japanese “霧の海と謎の秘境”. This can be translated to “The Sea of Fog and the Mysterious Secluded Region”. In other words, a new area should be added with Version 2.2.

Moreover, the thumbnail and the stream’s YouTube description revealed several seiyuu (Japanese voice actresses and actors) will appear as guests. We have Shun Horie (Sora / Aether / male Traveler), Masakazu Morita (Thoma), and Chiaki Takahashi (Xinyan). Shohei Taguchi will be the MC, and it’s a pre-recorded stream.

Besides the usual trailer and Events introduction, we should most notably get an official confirmation for the banner reruns. Data miners can’t find data about banner reruns, so you should take any rerun leak you’ve seen till now with a huge grain of salt. Some leaks pointed at a Hu Tao rerun, but nothing is certain till the stream. Lastly, as always, we’ll update our specific codes guide with the new Version 2.2 codes, so keep the guide in your bookmarks.

Genshin Impact is available now on PC, PS4, PS5, iOS, and Android. The Nintendo Switch version is also coming at some point but has no release date yet.