A new scan from V-Jump, translated by the folks at ShonenGames, shows some new story content as well as the game’s official box art. Technically the artwork has only been confirmed for Japan but based on past Dragon Ball titles that have come out, it’s likely to be the box art for every region. You can check out the scan as well as the official cover down below.

We also get some new story details from the scan. You play through the story as yourself, while your soul is linked up with other Dragon Ball characters. You progress through the story by playing as specific characters and deepening your bond with them. The Z-Fighters are losing their consciousness one after another and it’ll be up to you to figure out what is going on in their heads. We’ll be sure to find out how Android 16 and Android 21 fit into the mix when the game finally releases.

Earlier this month, we got a bunch of new trailers showcasing popular villains Cell and Majin Buu, as well as Goku’s son Gohan. Also, we got the chance to preview Dragon Ball FighterZ at New York Comic Con.

Dragon Ball FighterZ is coming to PS4, Xbox One, and PC sometime in February early next year. 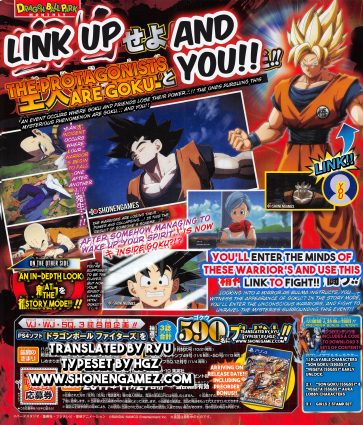