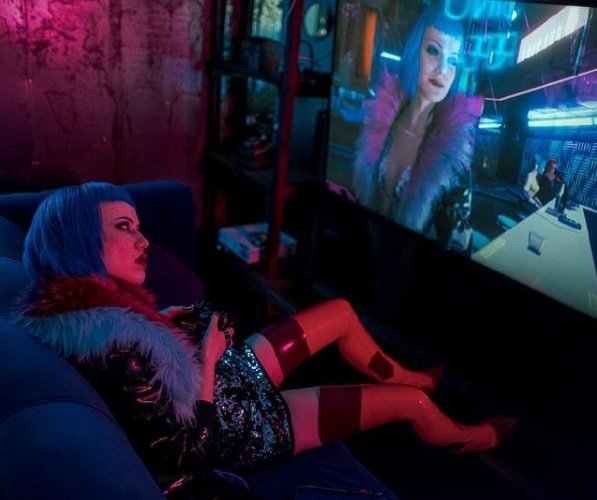 “I like to know everything about the people I work with.” – Evelyn,

Ah, Cyberpunk 2077. The game that was hyped to the max but, unfortunately, fell short of the finish line.

Thankfully though, many of the more troublesome bugs have been ironed out with a slew of patches that has seen players finally able to knuckle down and enjoy the game’s true visual beauty.

While Cyberpunk 2077 is still far from perfect, and what game truly is, developers CD Projekt Red have now begun to shift away from bandaging the holes in the game to creating more content for players to enjoy.

As much as the futuristic title has received plenty of complaints, one area that shines is how incredible the characters are, making them like a moth to a flame for cosplayers.

Cosplayer ladalyumos knows this only too well as she slips inside the shoes of Cyberpunk‘s vibrant and clever, Evelyn Parker. Evelyn’s intense style consists of her incredible blue hair, a black jacket laced with brightly coloured fur trim, flamboyant nails, and red thigh-high boots.

As you can see from ladalyumos’ cosplay, she nails Evelyn’s attitude and fashion down amazingly. Although some of the images are somewhat risque and probably NSFW, Lada coats this Cyberpunk cosplay with her own style and makes no apologies for it.

For all the information surrounding Cyberpunk 2077‘s DLC and current patch notes, make sure you check out this article on its DLC and this one on patch notes to stay up to date.