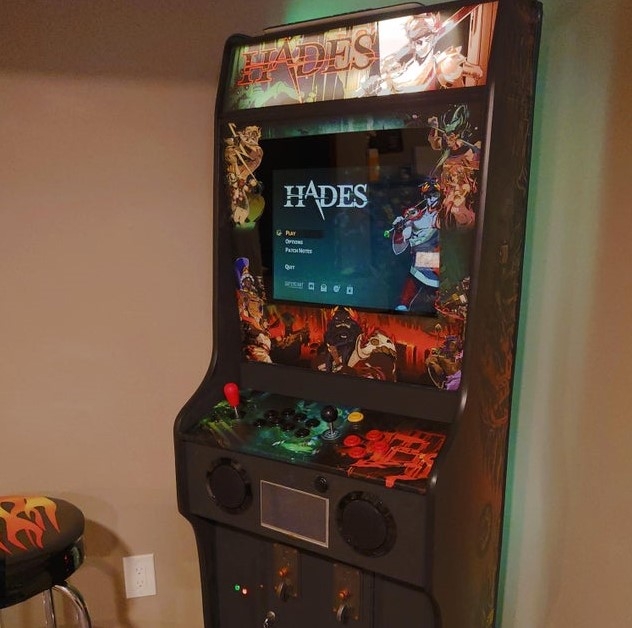 As time has gone on, gaming cabinets have slowly become a thing of the past. Even so, many of us still have fond memories of heading down to our favorite arcade, pockets heavy with coins, and eagerly slotting every dime into our most beloved game. You’ll still find them dotted around the country in arcades and bars but it seems as though the home console has taken precedence these days. Thankfully, there’s still a desire for these retro machines and having the luxury of one in your own home is many gamer’s dream. If you’re a Hades fan and also love gaming cabinets, do we have a surprise for you.

Reddit user canhazreddit has built their very own Hades arcade cabinet for the world to see and, boy, does it look good. Running on intel i5, 1060ti and win 10, canhazreddit inherited an old 1983 Nintendo cabinet, gutted it to make it thinner and then placed a PC inside. As for the artwork, they ended up photoshopping the graphics together for the control panel, bezel, marque and sides with the help of Gameongrafix who did the vinyl printing. Everything you see is mapped to a virtual Xbox controller, so the right stick is a right thumbstick, and the red buttons are a D-pad that navigates the menus in Hades. The left stick on this specific build is analog which boosts Google ultrastik 360 and also eight button inputs, too.

The best part about all of this is that we can actually see how it handles Hades. Going by the video, the controls seem super responsive as well as producing a clear sound. Personally, it’s probably the best way to play this type of game; it looks incredibly fun making me wish that I could get one for my own home. Make sure to check out the video below, it’s sure to make you just a little bit jealous.

For those who just want to relax at the end of the day but still desire that Hades vibe even on their downtime, check out this 12-hour long video of the Hades Yule Log that will for sure put you at ease in no time. The Hades community, as we know, are super talented and if you haven’t seen it yet, check out this cosplay of Zagreus or how about this exceptional art from Rachel Weiss that turned Dusa and the Furies into a punk rock band. We even had someone complete the game using a dance pad!

Just like Zagreus’ quest to reach the surface and get past the underworld, we here at DualShockers couldn’t escape from Hades and named it as our Game of the Year for 2020. Even though my personal choice was The Last of Us Part 2, there’s no denying how great Hades is to play and it deserves all the praise it receives. If you haven’t had a chance to pick it up, Hades is available now on Nintendo Switch and PC. You can also check out our review of the game right here.

The post This Hades Arcade Cabinet Would Look Amazing in Your Home by Rachael Fiddis appeared first on DualShockers.