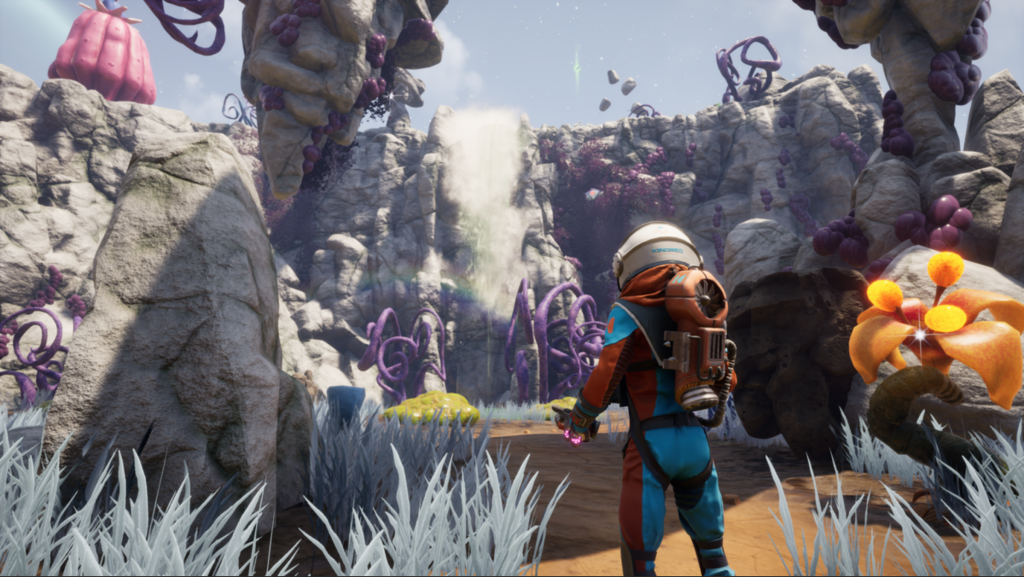 It’s tough to put a label on Journey to the Savage Planet. The first-person adventure wears the hats of many genres while channeling its inner No Man’s Sky, Portal, Metroid Prime, and Ratchet and Clank. Very often, a game with multi-genre ambitions and influences can lose its own identity, but Journey to the Savage Planet proves that a game can be both familiar and original.

You play as an employee of Kindred Aerospace, a company that proudly boasts about being the fourth-best interstellar exploration business for the eighth year in a row. Kindred’s CEO Martin Tweed is an enthusiastic chap who seems to be modeled after Aperture Science founder Cave Johnson. Both have a penchant for communicating via prerecorded video messages with an unintentional comedic flair. While you are in your spacecraft, known as the Javelin, you can watch a series of hilarious ads that pop up on the various screens in your humble abode for what can only be described as product placement for the worst products ever created.

“Journey to the Savage Planet proves that a game can be both familiar and original.”

As a part of Kindred’s Pioneer program, it is your job to discover, explore, and research planets that are suitable for human habitation. You are sent to explore the planet known as ARY-26. The trip there used up all the Javelin’s fuel so if you want to return to Earth, you will need to find an alternative source for fuel. None of this will be easy as a series of budget cuts have limited Kindred’s resources and they can only provide you with the most basic equipment and a snarky, sub-par AI companion named EKO. Luckily, your ship comes with a 3D printer that, with the proper resources, can craft better gear and upgrades. You’ll need to gather these resources which are found hidden on ARY-26 by extracting them from the creatures and plant life that inhabit it.

Once you step out of the Javelin, a new and exciting world awaits. It’s a brilliant and bright universe that contains hidden dangers that betray its beauty, including flora and fauna of the friendly and nefarious varieties. You will want to scan everything! In addition to providing useful information, the scanner report contains amusing anecdotes or jokes that get compiled into the Kindrex, which is Journey to the Savage Planet’s version of Wikipedia.

Admittedly, I often skip reading this information in games but here, I looked forward to unlocking new stuff just to read the descriptions. The description of the Infected Pufferbird, for example, results from what happens when parents don’t vaccinate their kids. I also can’t say Baby Shock Fruit plant without singing it in the form of the Baby Shark song.

The object of Journey to the Savage Planet is to unlock the secrets of ARY-26 by completing quests or missions that involve solving puzzles, platforming, combat, and of course, exploration. It’s not long before you realize that you may not have been the first explorer to probe this uncharted territory. This further adds to the mystery of the planet and might explain Martin Tweed’s growing interest in your work. 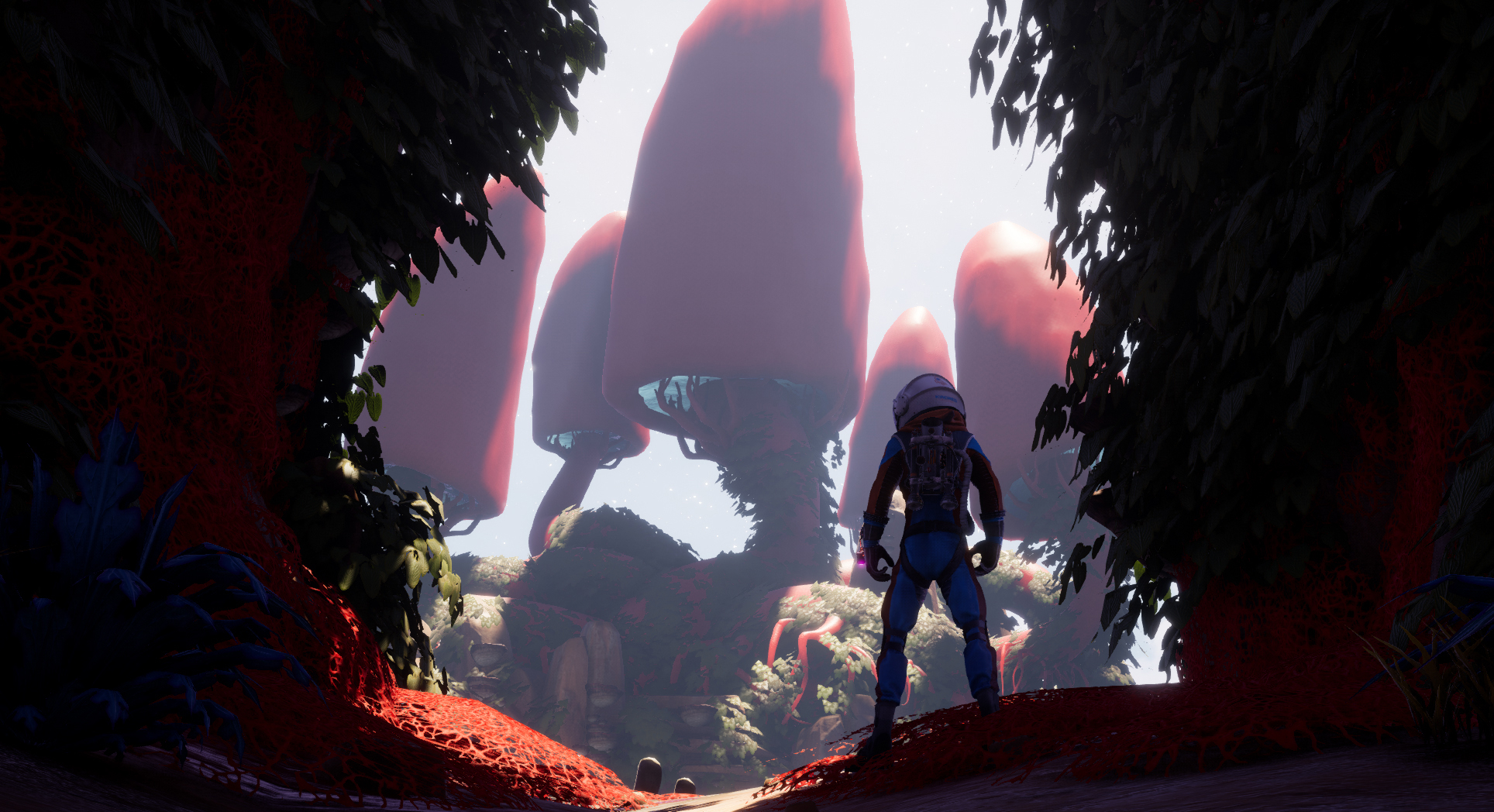 Gameplay is both intuitive and satisfying with the control scheme feeling responsive and fluid. With that being said, you should still expect to die several times because often, you will come across areas and tasks that you aren’t optimized to complete yet. Sometimes failing is as much fun as succeeding since death is never permanent thanks to the Bio-Replication Chamber that 3D prints a new body with all of your memories intact. Upon dying, you will need to return to your place of death if you want to reclaim the contents of your backpack which leads to the new you encountering your former self’s dead body. You can even bury your former vessel and in its place a tomb marked with a reminder of how many times you have died appears.

While it’s full of hidden objects, secrets, and hidden areas, Journey to the Savage Planet is a game that is meant to be finished. I applaud Typhoon Studios for this because, while in theory, we say we want our favorite games to go on forever, we don’t mean it. I know I often feel overwhelmed when I’m presented with seamlessly unending games like The Witcher 3: Wild Hunt and Grand Theft Auto V. It’s not that I don’t appreciate games like this, but I just don’t have the time or attention span that they require and I end up missing out on large portions of the game.

Journey to the Savage Planet is the perfect length and when I finished my first playthrough, I wanted to immediately go back for the pieces I missed. It wasn’t just the length of the game that worked well, it also felt as though everything in it mattered and that I wasn’t burdened with completing unnecessary tasks that were the product of a sadistic developer.

One small issue I had with the game was that having to backtrack after a death becomes redundant. Not that the game doesn’t give you ample fast track points, because, in fact, it’s very generous with them. I just started getting a bit frustrated being sent back to the Javelin after dying, especially on a few of the missions where the transportation pedestal was not optimally placed to where I wanted it to be. I wouldn’t mind Typhoon Studios implementing something like you see in Diablo 3 where you can choose where you respawn even if it comes with some penalty or fee.

“There’s a lot to love about Journey to the Savage Planet but most importantly, it reminded me why I started playing games in the first place: for fun.”

The final boss battle in Journey to the Savage Planet is a challenge so before taking it on, be sure you’ve leveled your character up. There are two ways in which you can do this. In order to gain a higher health and stamina threshold, you need to seek out Orange Goo. It’s found almost everywhere but sometimes, it’s not in plain sight. You will also want to complete science experiments or side missions which will advance your Field Explorer rank in order to upgrade your gear and unlock new perks. These upgrades and unlockables will also require the resources you have been collecting from ARY-26 and its plants and animals.

On a technical level, the game performs almost flawlessly on PS4. Although I do feel I need to mention that I encountered one glitch that caused instant death for no reason after restarting one of the two beacons needed to gain access to ARY-26’s tower. The glitch was eventually fixed, however, and I could resume my playthrough with no further issues.

Journey to the Savage Planet can be played solo or in a 2 player co-op mode with an online partner. It’s worth noting though that my review playthrough was done entirely solo, so I can’t speak to how the experience might be in co-op.

There’s a lot to love about Journey to the Savage Planet but most importantly, it reminded me why I started playing games in the first place: for fun. Journey to the Savage Planet offers a ton of enjoyment in both its gameplay and storytelling. Bravo to Typhoon Studios for kicking off 2020 with what might just be the sleeper hit of the year and mic dropping a brand new IP that shouldn’t be missed.

The post Journey to the Savage Planet Review — A Brand New World by Laddie Simco appeared first on DualShockers.