Today Microsoft released its quarterly financial results related to the first quarter of fiscal year 2018, which corresponds to the period between July 1st and September 30th. Of course, that included information about the performance of the Xbox business and Xbox Live.

In the slide below you can see the results of the “More Personal Computing” business segment, which includes gaming. 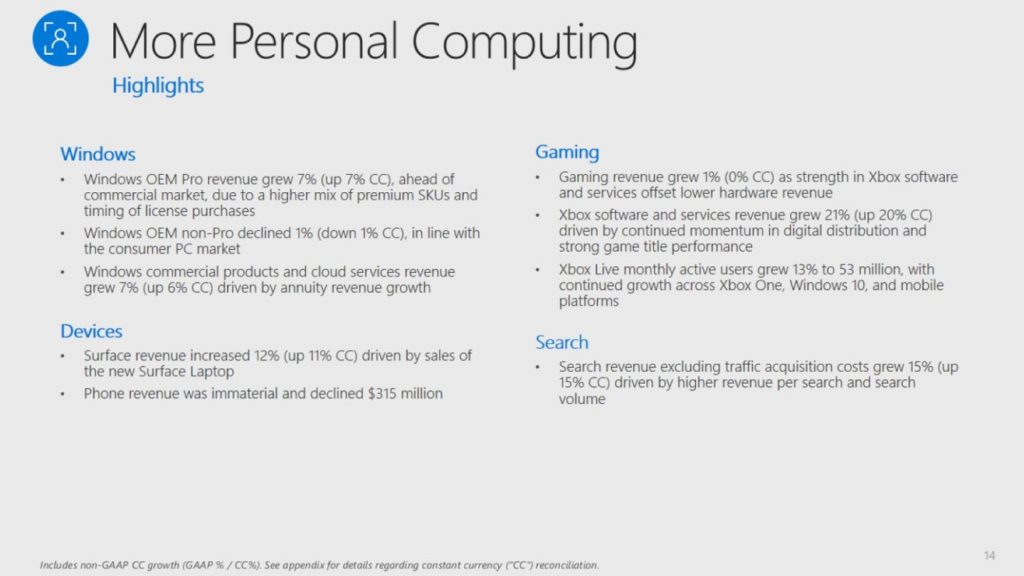 Gaming revenue grew by 1% year-over-year (from 1.885 billion dollars to 1.896 billion dollars) with a strong performance in game software and services, unfortunately, offset by lower revenue from hardware.

Specifically, Xbox software and services revenue grew considerably by 21% year-on-year, pushed by the momentum of digital distribution and strong performance of games. Xbox Live monthly active users grew year-on-year by 13% to 53 million. The number was essentially flat compared to the latest quarter (Between April 1st and ended on June 30th).

Looking at the results for the corporation as a whole, all the relevant value were in the black and increasing solidly year-on-year.

If you want to compare today’s results with those of the previous quarter (which started on April 1st and ended on June 30th, 2017), you can check those out in our dedicated article from July.