Over the past year, one of the more prominent figures that have risen in the video game “leaks” space has been that of a Twitter user that goes by the name of Sabi. Rising to prominence primarily during E3 2019, Sabi has leaked information in the past that has related to everything from upcoming Nintendo Directs to the title of the forthcoming Batman Arkham game. The accuracy of these leaks has varied, however, especially within recent months.

Now, it seems as though Sabi has gone into hiding thanks to the powers that be over at Nintendo. As of today, Sabi’s Twitter account has now been deactivated, at least for the time being. In a new message that reportedly came about via Sabi’s personal Discord server, it was explained that they took down their Twitter for the time being and will be bringing it back in the coming weeks. When they do return to the social media platform, it was stated, “I will not be leaking Nintendo Co Ltd. trade information again.” Instead, Sabi says they will focus on “my journalism, reviews, memes, etc. I hope you understand.”

The message, which can be seen in the image below, was signed off by “FanG”, which is an alternate username that Sabi has used on various Discord servers in the past. 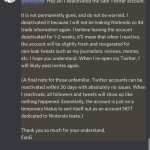 This actually isn’t the first time that Nintendo has pressured Sabi into staying silent about upcoming games or events, either. Just last year during E3, Nintendo promised to take legal action against Sabi if they continued to reveal more about the company’s soon-to-transpire Nintendo Direct. Sabi ended up staying silent regarding Nintendo during E3 week, but later went back to “leaking” more about the company, whether it be accurate or not. Clearly, Sabi must have hit a sore spot if Nintendo is once again putting pressure on them to stay silent. Perhaps rumors of a new Paper Mario and Metroid title could be true after all.

Regardless of what you think about the whole “leaker” section of the video game space, it is a bit odd to see Nintendo be the only prominent publisher that ever threatens legal action against folks like Sabi. That said, I don’t think I’d want to ever trifle with Nintendo’s legal department, so I don’t blame Sabi for opting to stay silent about the publisher moving forward, either. We’ll have to wait and see if some of Sabi’s final “leaks” and predictions regarding Nintendo end up coming to fruition down the road.