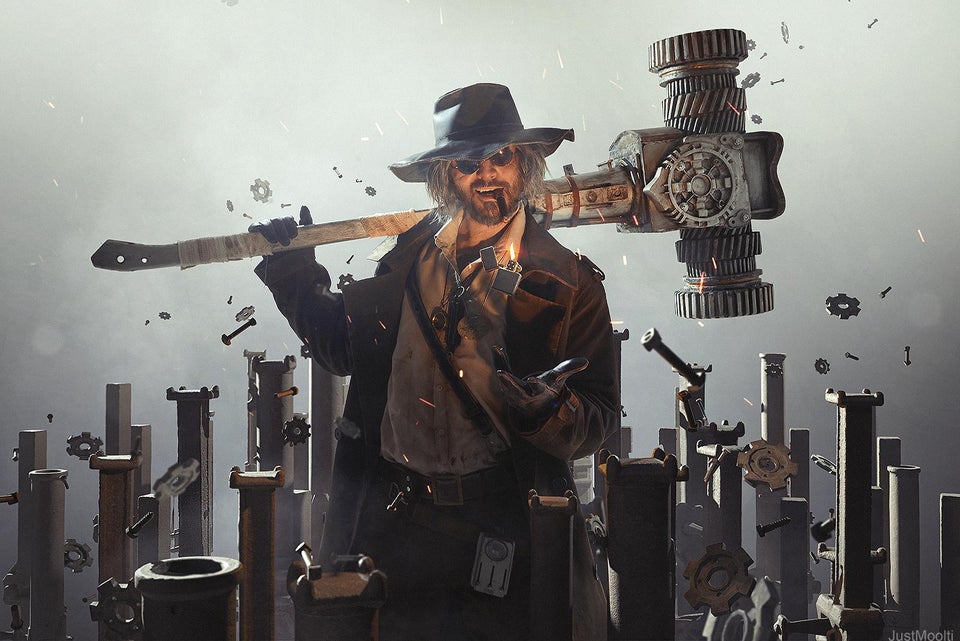 Capcom’s latest Resident Evil game spawned many incredible cosplays, but you haven’t seen an RE8 Heisenberg cosplay like this one.

Resident Evil Village‘s roster of haunting characters truly enchanted the RE fanbase, leaving them reeling from powerful and now infamously tall villains. With chilling performances from the game’s voice actors and terrifying gameplay, it’s no wonder why fans continue to cosplay RE8 characters long after its launch.

Although Lady Dimitrescu was (rightfully) the stand-out character when it comes to RE8, the other Lords of the Four Houses were just as memorable. The hammer-wielding Heisenberg, in particular, was another fan favorite, with all his volatile ruggedness.

With such strong characters comes plenty of cosplay potential, and Russian game dev/cosplayer Mikle Muraki does not disappoint. His RE8 Heisenberg cosplay is fantastic, looking as if he came straight from the game and into real life.

THE RE8 HEISENBERG COSPLAY

Through a combination of skilled painting and equally as skilled photography, Muraki’s Heisenberg cosplay is nothing short of stunning. Both haunting and just downright cool, he’s captured the exact style of the villainous swagger of the character.

On his Instagram, Muraki posted stories showcasing the cosplay project. By weathering new leather with paint and adding additional buckle details to existing clothing, he leans into realism for the photo. Of course, he’s got the iconic giant hammer and sunglasses, with the floating lighter for extra flair.

Though, to achieve a cosplay this good, Muraki worked with a team of other talented artists. While he constructed the majority of the costume himself, cosplayer and wig maker Mim (@rita_mim on Instagram) styled the gray wig. Also, MUA and cosplayer Anastasia Miramarta added the additional make-up details to really bring the character to life.

To top it all off, Heisenberg’s iconic hat was crafted by leather artist Svetliy Sudar. Along with that, the stunning photo was staged and shot by cosplay photographer @justmoolti on Instagram, bringing the final RE8 touch.

Overall, this RE8 Heisenberg cosplay shows that it truly takes a village – no, not that one – to not just recreate, but to create something truly memorable.

To see more of Mikle Muraki’s cosplays, which are all stunning, check out his Instagram page or his Twitter. In the meantime, Resident Evil Village is currently available to play on PC, PS4, PS5, Stadia, Xbox One, and Xbox Series X/S.

The post This Steely RE8 Heisenberg Cosplay is Chillingly Charming by Natalie Schmidt appeared first on DualShockers.