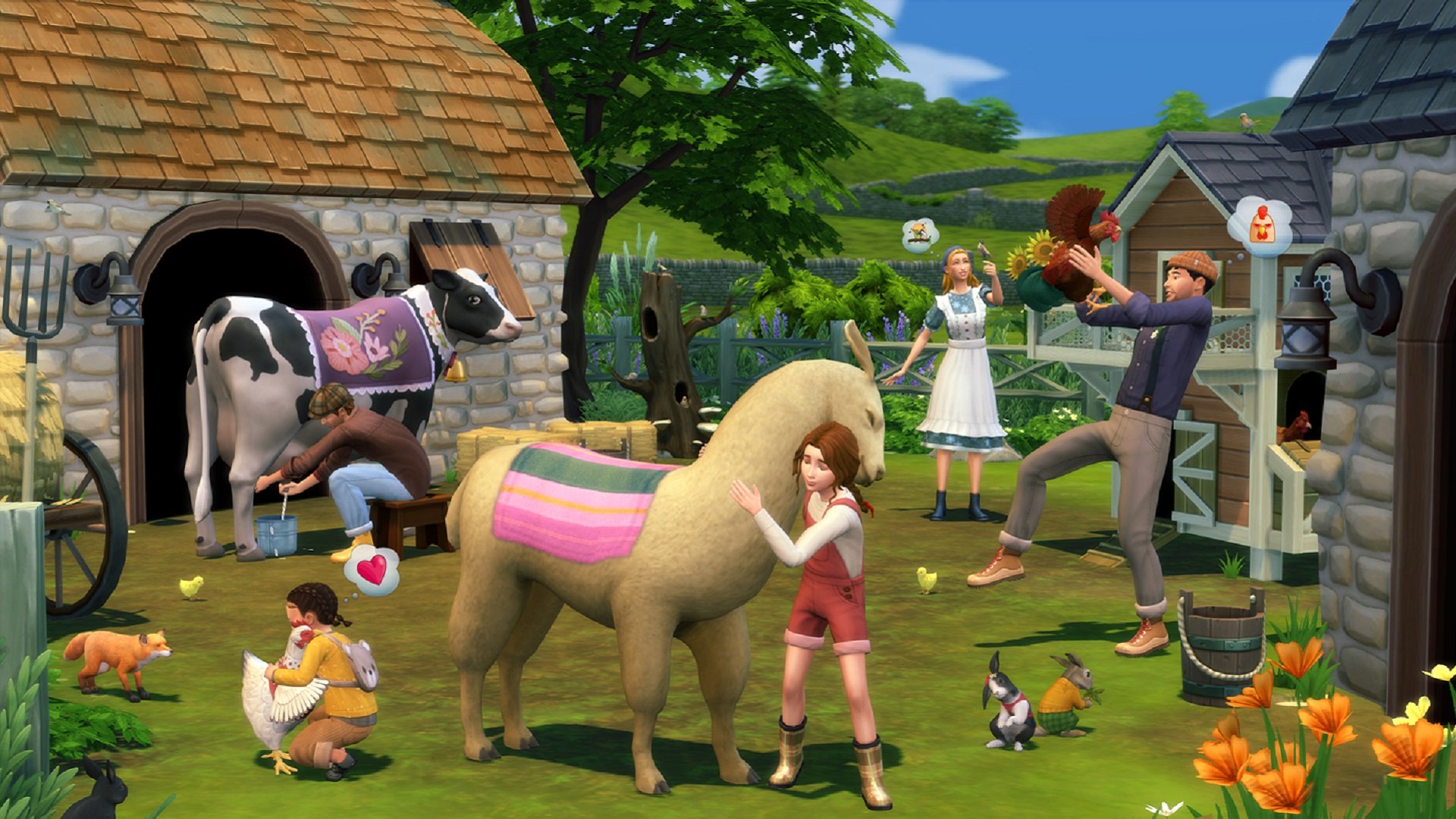 The Sims 4 latest expansion pack, Cottage Living, is a must for those who just want to get away from it all and surround themselves with the simpler things in life. Basically, there are rainbow Llamas – do I need to say more?

It’s been a tough year and while the vast portion of us have been pulling our hair out while housebound, finding that little piece of solitude away from all the chaos has never been more important. Thankfully, The Sims 4‘s next expansion pack may just hold the key.

I was lucky enough to take part in EA’s The Sims 4 Cottage Living virtual preview event recently and let me tell you, it was jammed packed with adorable animals, useful information on what players can expect as well as farming tips and, naturally, new places flirty players can woohoo.

Before I get into the nitty-gritty of what players will discover in Cottage Living, let me tell you the important part of where it’s set in case you didn’t know. If you happen to love the quintessential English countryside, you will feel right at home in the town of Henford-on-Bagley. This will be the idyllic location where players will live out their thatched-roofed, nature-infused fantasies by living off the land and befriending all the cute little animals that include foxes, bunnies and birds.

There’s also a thriving local village laced with beautifully crafted old stone homes and its very own pub to get pissed at, as well as a fair where you can bring your huge overgrown veggies to run in a competition against other sims. Of course, if you think your giant pumpkin is lacking some ompf, why not try your hand at bribing the judge?

Throughout the presentation, I got a glimpse at what was in store regarding raising your own animals and some of the land’s creatures. Your sim now has the opportunity of owning their very own little farm packed with chickens, cows, temperamental Llamas as well as fruit, vegetables and plants that you can grow from scratch.

Once players purchase a chicken coop, they can collect eggs for baking, start their own little family by breeding adorable chicks, interact with them, name them, and give them special feed to determine how they look. Word of warning though, be nice to the chickens because if you make them mad, they will find you and they will kill you prompting a brand new death called ‘Death by Chicken’.

Probably one of the most appealing animals to own is the Llama. Not only will these feisty creatures allow you to change the colour of their wool when it comes to shearing them for trade by feeding them different foods, but you can also dress them up in little outfits like aviation attire while giving them a big hug (if they let you).

If the idea of growing your own little veggie patch has been a long acquired dream, Cottage Living has your back. In a new objective called ‘The Garden Patch’, players can plant their very own oversized vegetables like pumpkins, watermelons and mushrooms. Caring for them by watering your crops a lot and fertilising them will then produce huge whoopers but if you fancy keeping them smaller, you can do that also.

Producer of Cottage Living Antonio Romeo, who has been the guide for this event, went into some important details when showcasing the building aspects of this expansion. Discussing the traits panel when in build mode on a lot, Romeo said that this time, they didn’t add any new traits but instead “pulled some of the more challenging lot traits out and turned them into lot challenges and how this differs from lot traits is that you can have as many challenges as you want and they don’t conflict with your lot traits”.

One of the biggest aspects of Cottage Living that Romeo wants to get across is how family-friendly this DLC is by involving children in as many activities as possible that include feeding the animals, cooking together and wholesome family picnics in the surrounding woodland by putting together a neat hamper of goodies. Or you could do what I like to do and that’s bin the cooking idea and just order food to your home in seconds – less washing up.

Personally, one of my favourite parts of Cottage Living‘s whole aesthetic is the adorable process of giving furry creatures gifts. Want to be pals with a bunny or a bird? Strike up a relationship with one while out walking in Bramble Woods or whilst on a jog and you can exchange items like wool you received from the Llama and many other gifts. Building up a good rapport with birds also means you can slip into your very best Snow White impersonation and sing with the little blighters to create that ultimate Disney moment.

Thankfully, you won’t have to get out the butchering knife to slice and dice that cow you’ve been milking for days to get yourself some prime steaks.

If you’d rather not head down to the local market to pick up groceries and solely live off the land, Antonio Romeo said during the event that “The main goal for this pack is that we wanted players to be able to live completely off the Cottage Living lifestyle” Romero went onto say that players can care for animals as well as trade them for simoleons or keep harvesting off them for things like milk, wool and eggs. If you’re lucky and have fed your chickens a special type of golden feed, your feathery mates may even lay a golden egg that will see you loaded with cash.

Thankfully, you won’t have to get out the butchering knife to slice and dice that cow you’ve been milking for days to get yourself some prime steaks. Romeo points out that your cow will simply walk into the shed and a package of meat will arrive in the meal shortly after.

Of course, we couldn’t have a Sims preview without asking the most important question – will there be any new woohoo spots? Those dying to take their potential love interest for a roll in the hay will be happy to learn that the animal shed will become a hot spot. Maybe let the animals know first though because that would be kinda gross.

The Sims 4 Cottage Living will release on July 22, 2021, at 10 am PST / 1 pm EST / 6 pm BST for PC, Mac, PS4, PS5, Xbox One and Xbox Series X|S. If you pick the game up before September 2, you’ll bag yourself the Gnome on the Go digital content, including a ridable bicycle, a statue of a gnome riding a chicken, and a majestic tree.