Subsurface Circular is the latest release from the creators of Thomas Was Alone, Volume, and EarthShape, Bithell Games. The story-driven text adventure follows a robot detective as it attempts to solve a case revolving around the disappearance of numerous Teks within the Subsurface Circular, a subway system the android-like residents use to commute to their assigned job.

The game’s unique mechanics involve players finding keywords or focus points from the dialogue to progress through each level. As you investigate the disappearances, the answer to intriguing enigma will be revealed.

Michael: First, I want to congratulate you on Subsurface Circular‘s success. You had announced at DICE Europe this year that it received a 2% refund rate and a 97% approval rating on Steam….

MB: Yeah, it’s fine. There has been one or two negative reviews, but the rest have all been great.

M: Regardless, due to the game’s success, will there be a focus on creating smaller titles like Subsurface Circular in the future?

MB: We are certainly into the idea. There are a lot of pros to making these shorter projects. We have a lot of freedom in terms of fiddling and messing around; the lower risk alone allows you to spend less time and money making them. The fact that the audience seems to be into it as well, yeah, I think that we are going to do some more of this. I think we are going to do some smaller projects with fast turnarounds and see where it goes. That short thing seems to have worked and people understand it. I think there will be more of that kind of thing. We’re in pre-production of the next short and we’re going to see how it comes out.

M: Will these shorter projects coincide with the development of a bigger title or will these be the types of games you will be creating going forward?

MB: We’re focusing on these types of titles in the short term because, like I said, the audience has spoken with their wallets, and we’re going to keep making stuff for that audience. At any given moment, we’re also looking into a bunch of different things and trying to work out what we want to do next.

So now, yes, I think the next thing we release will be a short, but there is never just one game in the pipeline. We’re going to keep playing with a bunch of different things behind the scenes and seeing what the next few years hold for us. That being said, in the short term, there will be another short at some point.

We’re focusing on these types of titles in the short term because, like I said, the audience has spoken with their wallets, and we’re going to keep making stuff for that audience.

M: That’s awesome. Yeah, Subsurface Circular kind of caught me off guard. Not only I really enjoyed my time with it, but you also stealth released it.

MB: Yeah, I think the surprise kind of helped it a bit. It feels like that little secret game you find out about and hopefully want to tell people about. Yeah, it seems to be spreading in that way, which is great to see.

M: What influenced you and your team to create smaller experiences like this one instead of making something like your previous titles?

MB: We had just finished a project with Google called EarthShape which is a VR thing we collaborated with them on. We come off of that and we pitched around a bigger game we wanted to make — and I’m sure we will make it at some point.

We pitched that to big studios and we were negotiating that and tried to work out what was the best partner for it and that kind of thing. That was, honestly, taking a long time. Those negotiations, contracts, and all that stuff do tend to take awhile to do. So I and a couple other guys were kind of just looking for something to get on with, while the business people did their businessy thing.

I’ve always wanted to do branching narrative stuff. Thomas and Volume are both very linear in terms of their storytelling. Like, they basically tell the story that we wrote and then it just happens. I wanted to make something that was a bit more interactive; a bit more fluid. So we started prototyping and playing with that idea Then, I guess a couple months in – three months in, we were like: “this is actually kind of working. Let’s polish this up, create a bunch of content for it, and put it out there and see if the audience agrees.”

But yeah, Subsurface was about five months [of development] from start to end and that kind of led to something that seems to have landed with the audience. That is cool because, obviously, it was quite experimental for us and very different from what we’ve done before.

M: Yeah, that’s a pretty incredible turnaround as opposed to other games taking at least a year or more. Five months is really no time.

MB: It’s fast for us, yeah. Even Thomas took three years, so yeah, it’s a fast one.

M: Going back to influences, what games or other forms of media influenced the story and gameplay of Subsurface Circular?

MB: A lot of stuff from the indie side. The Twine games people have made. I’ve been playing a lot of Twine games and knew there was stuff in there that I wanted to do as well. Beyond that, I love BioWare, dialogue systems and that kind of thing. Then from a story point-of-view, it’s just all the sci-fi I enjoy reading like Asimov as well as some modern TV shows. So it’s a lot of different influences and you mush all those together, and you end up with something that is hopefully decent. 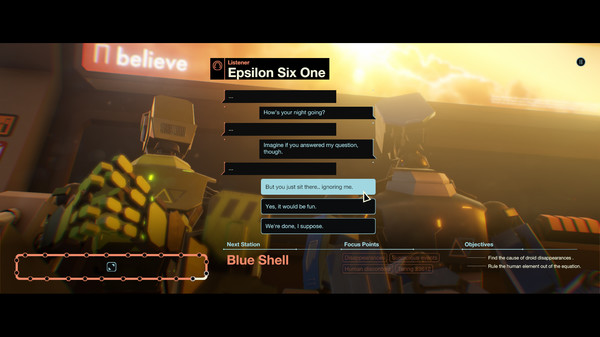 M: Subsurface Circular recently released for the iPad a couple days ago. What led you to bring the game to that platform?

MB: It seemed like a good fit. We initially released Subsurface as a surprise game; we hadn’t talked about it to anyone. But we did have a meeting with Apple just to show them what we were playing with and where that was going prior to launch before we really talked to anyone else and they definitely spotted the way the interaction worked — it was very much about pointing a clicking — and maybe that could be something that could feel good on a mobile device. So, we chatted with them pre-launch.

Then once we launched the game on PC, again, it was just an experiment. We said “Let’s see if this feels good on an iPad,” so we started prototyping it. There were lots of things that didn’t work straight away like getting the performance good and getting the UI to feel comfortable — because the main game was designed for PC with a big screen and a mouse pointer — making that feel good with your… well… with my chubby fingers, and working on that interaction to make that feel alright. We kind of worked on that, fiddled with it, and once we were at a point where we realized that maybe it actually felt good, we then worked with Apple to finish it off and then bring it out. It just felt like a natural fit. It felt like something I wanted to play on a train.

I also got messages from people that were playing the game on tablet PC’s saying “oh, it’s great on my Microsoft Surface” or whatever. That kind of reinforced, for me, that we were on the right track. It is definitely a cool way to play the game and it opens up to an audience who maybe doesn’t have a Steam account, who maybe isn’t made of PC gamers, but can try it at a different pace and have the same game experience PC gamers have, which is always good. 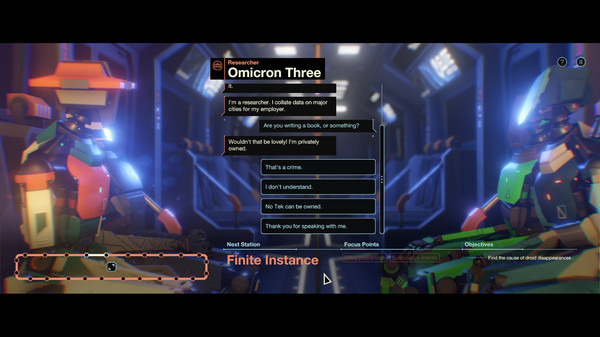 I’ve been playing the crap out of Mario + Rabbids. (laughs) Way too much. Yeah, I like the Switch. I can definitely see that working.

M: You can’t really talk about mobile or on-the-go games without mentioning the Nintendo Switch. With it being a good home for indie titles,  do you think Subsurface Circular or any of your previously released titles make its way to the console?

MB: I love my Switch. I’ve been playing the crap out of Mario + Rabbids. (laughs) Way too much. Yeah, I like the Switch. I can definitely see that working. We’re going to continue to play with different things. For me, it’s always about making a version of a game feel great on a platform then we’ll probably get to it and start playing with it. Like the decision to not release Subsurface on iPhone, for example, because it was too small to adjust it. We’ll experiment around and yeah, maybe. I love  theSwitch. That is all I can really say on the subject for now. We’re going to keep experimenting and working on stuff.

M: Going into Subsurface Circular‘s development on the iPad, was the transition from bringing that game from the PC to the iPad an easy one considering how close the release is from its initial launch on PC?

MB: So we released on Monday, so what’s the date today? It’s the twenty-fifth. So yeah, it took just over two months. It was relatively straightforward because the game is entirely mouse-driven on PC so it made logical sense that interface would work. Most of the challenges were getting that UI to feel good, and then the performance.

It does look beautiful. Like, if you play on an iPad Pro, it almost looks the same as the PC version. The changes are not so much about quality rather just an iPad renders differently than a PC. Yet, it looks fantastic, and that comes down to the team. It’s just amazing. Again, a really great looking iPad game.

It wasn’t crazy difficult, it was just that design process of trying to make this feel like it was designed for iPad because, obviously, it wasn’t. But yeah, it was relatively straightforward, to be honest. 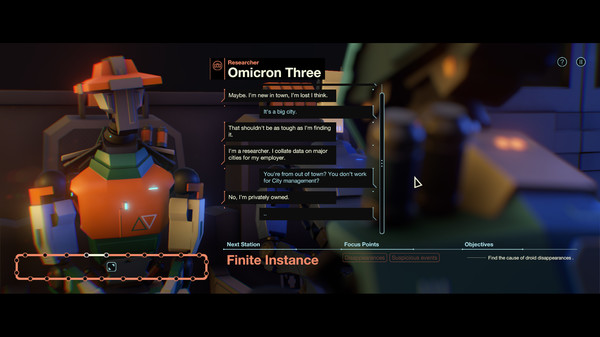 M: The last question I have for you is what is next for Bithell Games? Is there anything you can share about your next release?

MB: Not really. We’re going to continue to explore this short game stuff. I think people should expect more stuff from us relatively soon. It’s not going to be a matter of three years before the next game comes out. And that is all I really can say because frankly, right now, we’re experimenting.

We’re playing with stuff, we’re seeing if ideas are going to work and if what we’re playing with and cooking up is going to be interesting. For sure, we have heard the audience. We’ve seen the reaction that has happened with Subsurface and I hope we can make more stuff that appeals to that audience.

Subsurface Circular is available right now for PC and iPad.