Last week DualShockers was able to play the first few missions of Star Wars Battlefront II at an Electronic Arts event in New York, and we liked what we saw. One of the biggest takeaways from it though was the impact that the game would have on the franchise.

We got to sit down with Marc Thompson, the Game Director for Star Wars Battlefront II, and discuss a large part of the game’s background and how this Star Wars story fits into the larger cinematic universe.

Noah Buttner: How much Star Wars did you consume in preparation for Star Wars Battlefront II?

Marc Thompson: A lifetime. I was playing with the toys before I even knew what they were, which is a credit to early character designs. I was born after the original trilogy had already finished in theaters, and I didn’t actually see them in theaters until after I saw the prequel trilogy.

I’m part of the generation that cinematically grew up with the prequels. The most hardcore thing I read, Which I thought was pretty deep into fandom at the time — But then since working on the project, I realized it’s just a drop in the ocean — was the Thrawn trilogy. That was the first time I went beyond mainstream Star Wars media.

N: When you set out to make a story for Star Wars Battlefront II, what made you decide to go from the Empire’s point of view?

MT: It was really just about understanding who they were as people. In the movies, it hasn’t really been explored. They’re intentionally this faceless enemy and they’re all given a number. They’re dehumanized by design. They’re ‘TK-4 whatever’.

I was reading Alexander Freed’s novel Twilight Company, which was the companion to Battlefront 2015, and it had a chapter from a Stormtrooper’s perspective and it gave the trooper a name and it talked about her experience being a soldier on the front lines, and that was really interesting. I said ‘yeah we’ve never really seen that before.’ Just reading two paragraphs of that story sparked a ton of questions in my head.

What was interesting about making a character is giving that character a personality because obviously, the empire has no real personality. The troops that do the fighting are all dehumanized in this homogenous group of troops in uniform, and then the generals are all stuffy British types on the deck of a Star Destroyers. They’re way away from combat and battle, and they’re all very British stiff upper lip just giving commands and not really expressing any kind of emotion.

That’s why it was interesting to give a stormtrooper a strong personality because not everyone is going to believe in every order they’re ever given. They’re going to have a personality and a spirit, and if they hear something they don’t agree with they’re going to say ‘that’s dumb we shouldn’t do that.’

It’s kind of striking when you see it in all the trappings of the Empire: the deck of a Star Destroyer, everyone in uniform, but unlike the movies, you have this character Iden who’s on there giving people shit about the orders she doesn’t like.

N: You mentioned the Thrawn trilogy, is there anything else from the extended universe that you’ve looked to for reference when creating Star Wars Battlefront II’s story?

MT: Gamewise the Corvus, which is Inferno Squad’s command ship. In the Galactic Civil War era there aren’t any mid-sized ships. You either have a Tie fighter which is about 10 meters tall and then you have a Star Destroyer which is roughly two kilometers long, so we needed a vessel that could carry a bunch of Tie Fighters and act as Inferno Squad’s staging ship that could jump around the galaxy to different planets.  In the story we want to take you on a tour of the galaxy and it wouldn’t make sense for Iden to command a Star Destroyer because that needs 3,000 people to operate, and Tie Fighters don’t have hyperdrives.

Then we realized that another team had a similar challenge, and it was the Fantasy Flight Games for the Armada miniatures game. In their game design they had the same problem, they needed a mid-sized ship that could carry other ships and move with more agility around the tabletop battlefield.

So one of our Designers, Nick, had a model of this mid-sized ship, an Imperial Class Raider, and it fit everything we needed: it was 200 meters long it could carry a small squad of Tie Fighters so then we talked to LucasFilm and they said “‘yeah cool we love that ship, let’s bring it into the fold.” 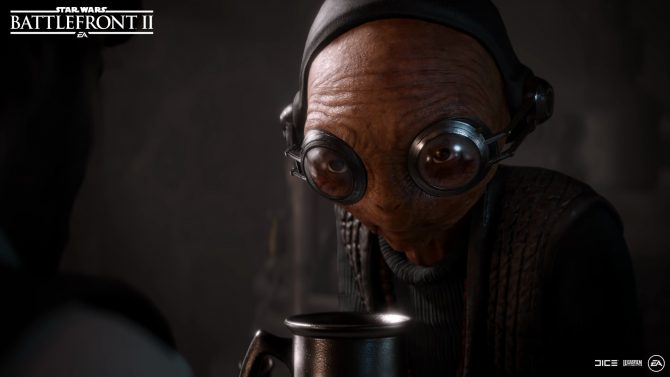 N: Was the Inferno Squad book written beforehand or after?

MT: It was written during development. It’s rude to say that books are easy, but it’s definitely a shorter development process. I don’t want to diminish Christie Golden’s work. but it started after we were in development.

We were actually shooting the Mo-cap while she was writing it and LucasFilm liked the characters and the things we were creating so they thought it would be a good opportunity to tell the backstory of Inferno Squad. All of the events of the novel were written before the script of the game, so all of that stuff exists in the mind of the characters.

MT: What we were trying to do was was to humanize the Empire, because again it all goes back to the challenge that LucasFilm gave us: what makes a Battlefront Star Wars story different from all of the other Star Wars stories?’ So it comes back down to the idea of a soldier and really telling a personal story on the scale that a soldier experiences a war.

If you think about the movies, it’s the classic hero’s journey, it’s the moisture farmer who discovers he has Force powers or the scavenger who discovers she has Force powers, and they go on to be a Jedi and tip the fate of the galaxy one way or another. The soldier’s experience is often more about individual battles rather than changing the overall fate of the war. Soldiers stories are often more interesting when it’s just about a small unit and how they cope with everything that happens around them and sometimes to them, and they don’t have that kind of control– they’re the pieces on the chessboard. They’re not moving the pieces on the chessboard.

Star Wars Battlefront II will be available on November 17th for PC, Xbox One, and PS4. You can check out our preview of the first few missions from the campaign.