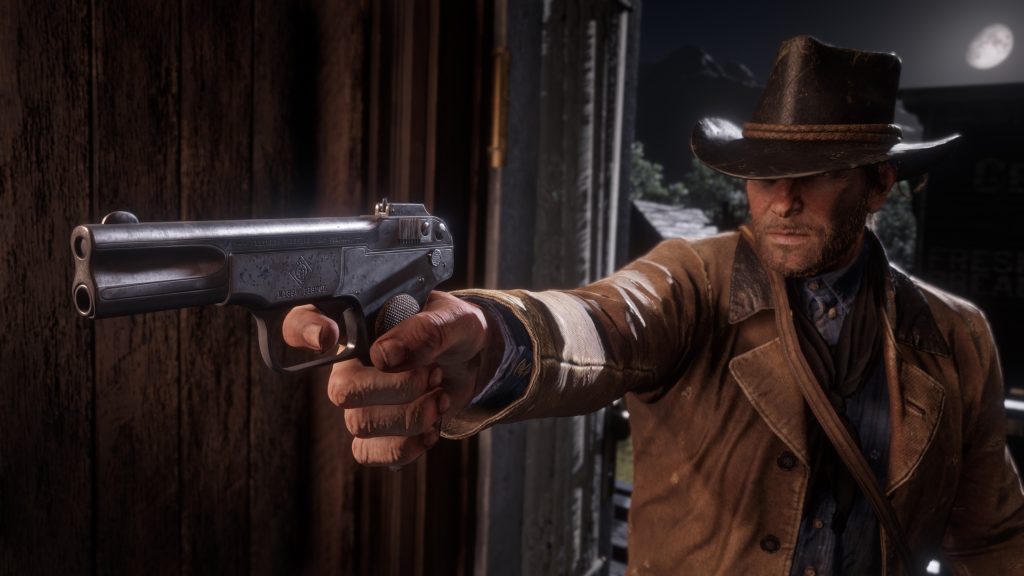 Coming over a year after I first saddled up to play Red Dead Redemption 2, it’s fitting to come back to the game with a second wind and the chance to really take the game in. In the time since it first released, Rockstar’s ode to the West seemed to draw as many criticisms as it did admiration, perhaps due to the game’s overwhelming ambitions in light of its massive, almost unwieldy scale. Given Red Dead Redemption 2’s deliberate and methodical pacing, I was looking forward to the experience of revisiting the game without racing against a deadline like when I first played it, especially given how much detail and smaller moments that RDR2 packs into its epic experience.

Despite coming back to the game after this extended period, even over a year later I’m still of the opinion that Red Dead Redemption 2 deserves a lot of credit for giving us such a fully-realized and detailed world to explore. That was of course coming from my first time around with the game on PS4, and the PC version of the game only enhances that further, and highlights Red Dead Redemption 2 as arguably Rockstar’s technical powerhouse, with some caveats.

I’ve been playing the PC version of Red Dead Redemption 2 over the course of the past several weeks since it released initially on the Rockstar Launcher (followed by its later debut on other PC storefronts like Epic Games Store and Steam). It’s been a long time coming for the PC release of Red Dead Redemption 2, especially for those that may have held out on the console versions in fall 2018, and Rockstar’s Western epic certainly delivers the bells and whistles that would be hoped for from such a highly-anticipated PC release. On the visual front, Red Dead Redemption 2 is a stunning display on PC, though it might come at the cost of some compromises on the technical end.

Let’s get those compromises out of the way first. Notably, since its launch the PC version of Red Dead Redemption 2 has been mired with a range of performance issues that Rockstar attributed to “specific combinations” of Nvidia hardware, be it CPU, GPU, or the drivers that you are using. Specifically, the most prevalent issues reported by players have been stuttering and freezing, an issue that I myself happened to run into quite frequently during my first few times playing Red Dead Redemption 2 on PC. 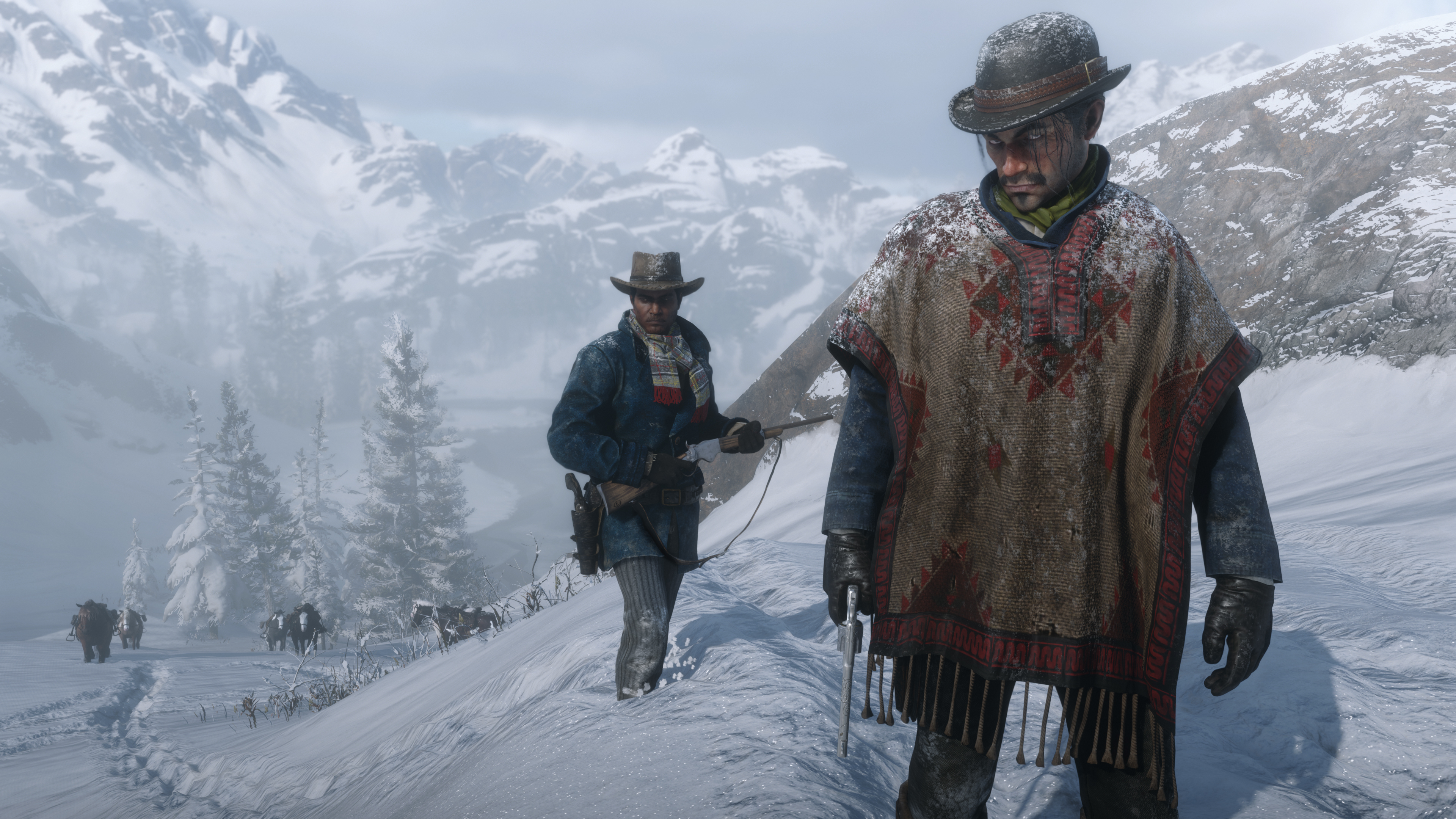 “On the visual front, Red Dead Redemption 2 is a stunning display on PC, though it might come at the cost of some compromises on the technical end.”

For context, my PC is more on the mid-level of most gaming rigs: I am running a Core i5-6600K, 3.5 GHz quad-core CPU, a GeForce GTX 1070 GPU, and 16GB of RAM. Though my now three-year-old PC is far from most high-end rigs nowadays, I was at least within reach of the recommended specs for the PC version of Red Dead Redemption 2, with the CPU being my only main drawback for the experience.

While I expected to go into my time with Red Dead Redemption 2 on PC not being able to reach the lofty goals of hitting its 4K benchmarks, I at least was hoping to see a notable upgrade on PC from when I first played through the game on a base PS4 over a year ago. For what Red Dead Redemption 2 was working with on the base consoles, it was already an impressive visual showcase, and I could only imagine it being that much more immersive and detailed on PC. 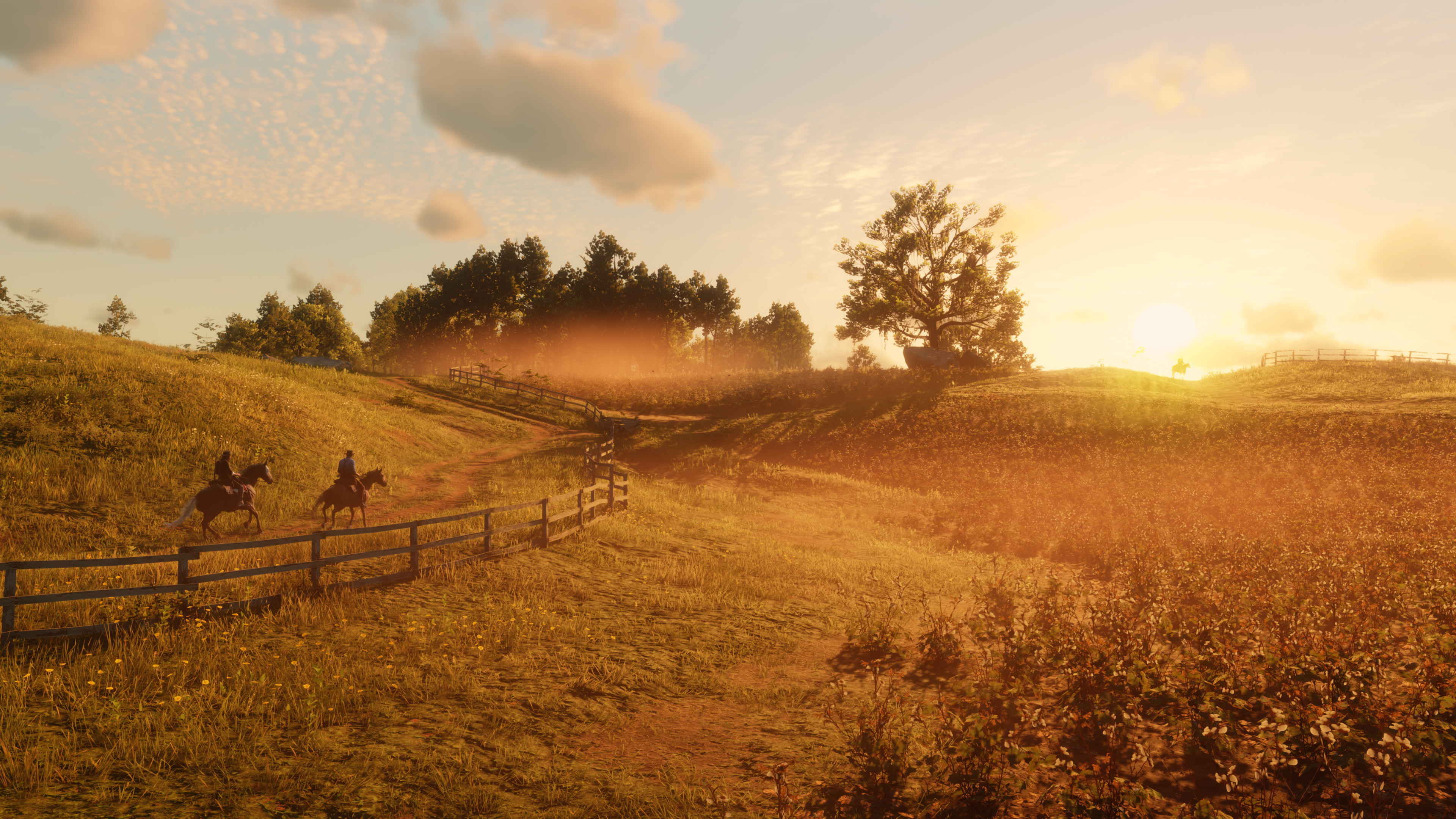 “Thankfully, after several weeks of new updates by Rockstar and tinkering with my settings, Red Dead Redemption 2 on PC has easily delivered a showcase-worthy graphical experience.”

During my first play sessions with the PC version, I almost immediately ran into major stuttering issues where sections of the game would be stalled for over 10-20 seconds at a time. This was especially the case during the game’s opening segment in the middle of a blizzard in the mountains. While I had improved the performance by making some adjustments to its graphics options (setting most of the options towards High or Medium), I still saw some significant instances of stuttering and delays as the game was trying to load me into the next section I was entering.

Thankfully, after several weeks of new updates by Rockstar and tinkering with my settings, Red Dead Redemption 2 on PC has easily delivered a showcase-worthy graphical experience, and seems like a worthy justification for the extra wait. Despite some of my initial issues getting the game to run at an optimal and consistent level (especially after switching from Vulkan to DirectX 12 for its visual processing), the PC version of RDR2 provides a ton of room for players to get an impressive visual experience, even though the graphics settings menu itself might be a little overwhelming. There might be one too many options to tinker with and change, and I would recommend that you spend some time in the graphics settings when you first start the game to familiarize yourself with its options. 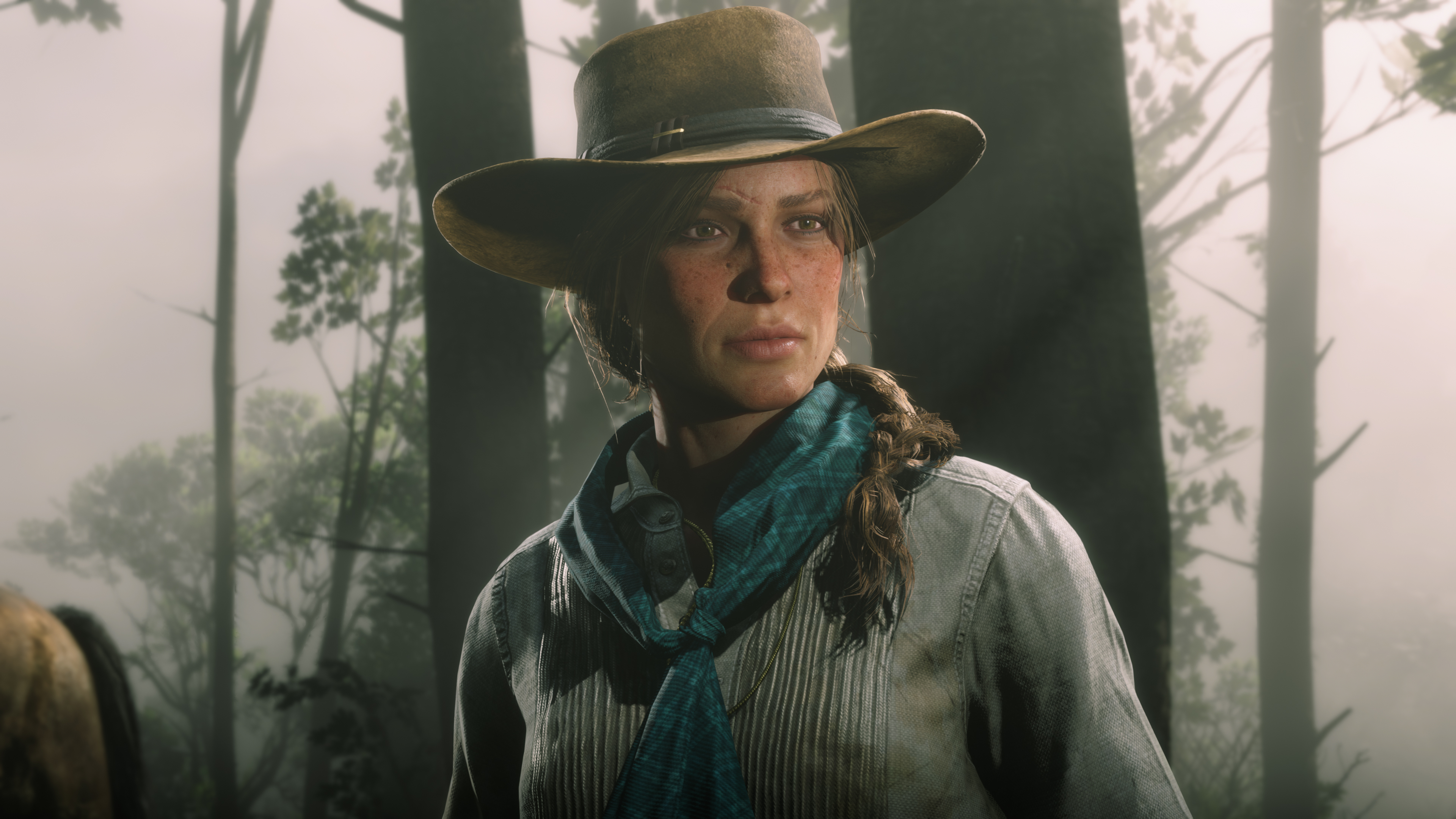 That being said, while the enhanced graphical options and settings are the marquee feature of Red Dead Redemption 2’s PC version, Rockstar also incorporated plenty of other new features to make the PC version an appealing package over the initial console versions. Most notably, the PC version’s enhanced Photo Mode (combined with the upgraded visual presentation) is surely a huge step over the photo capture features initially included in the game. In its place, the PC version has a “proper” Photo Mode that allows you to zoom in and out of the action, reposition its camera, change exposure and depth of field, and more. While our own Ben Bayliss managed to find ways to tinker with the camera for optimal settings in Red Dead Redemption 2 on consoles, the PC version’s more capable and intuitive Photo Mode is surely a significant upgrade for players looking to capture the game’s stunning landscapes and vistas in better detail.

Likewise, the draw of having mouse and keyboard controls is likely another appealing factor to those that may have waited for it over PS4 and Xbox One. Given that RDR2 already has a number of controls and inputs to work with, having the ability to tie them to specific keys or bindings is a noticeable improvement over its sometimes convoluted controls, especially when it comes to aiming and shooting. That being said, personally I am more attached to controllers over mouse and keyboard. While I played the game for the majority of the time on PC with an Xbox One controller, having the mouse and keyboard controls on hand is still a convenient option for players that may have struggled with the controls on consoles. 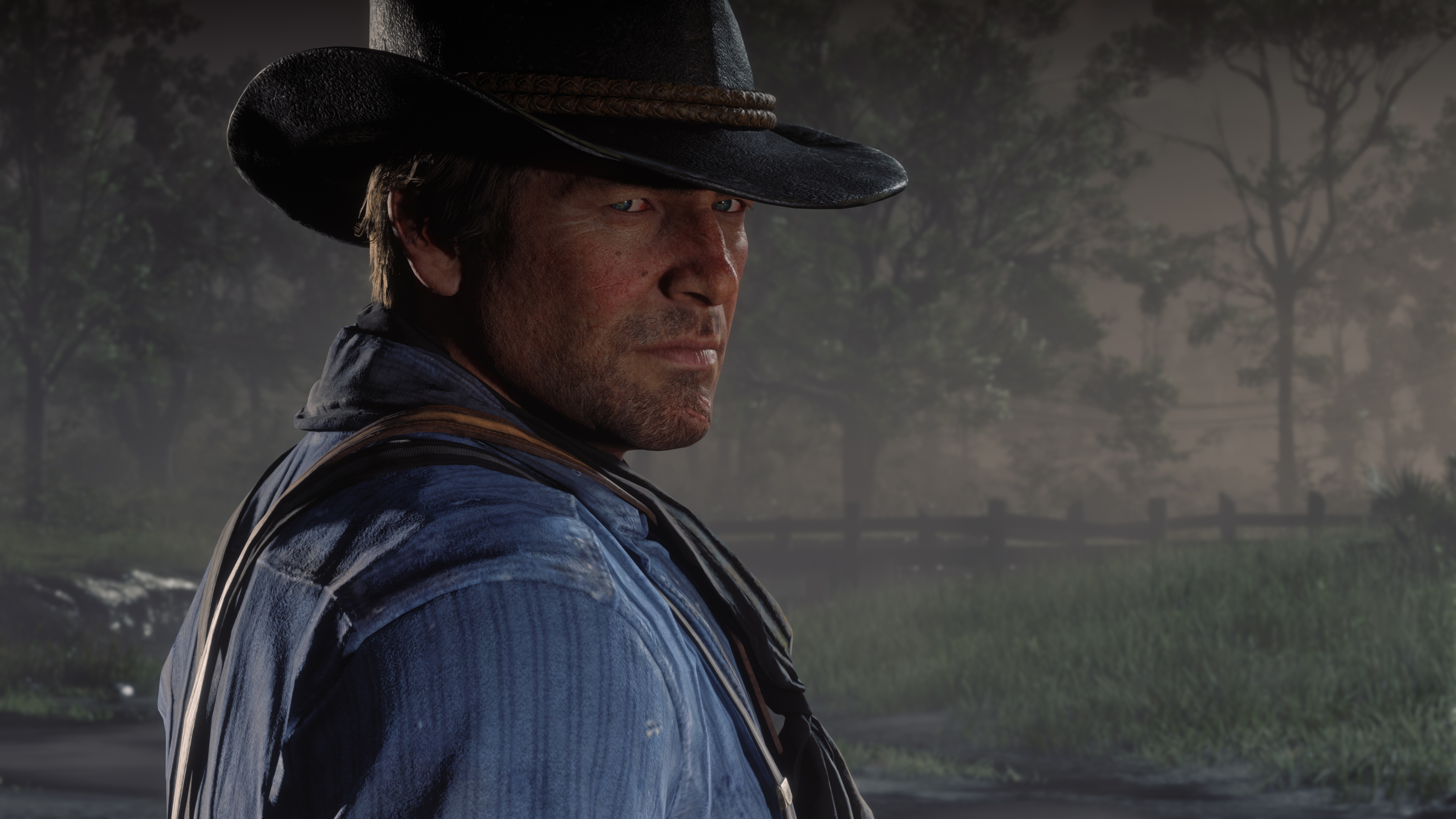 “Playing Red Dead Redemption 2 on PC gave me a renewed appreciation for the depth and scope of its world.”

While the PC version of Red Dead Redemption 2 got off to a rocky start at launch, over time and with several patches it has unquestionably become the best place to play Rockstar’s epic Western. The enhanced visual options and settings of the PC version breathe even more life into its already stunning atmosphere and environments, even for a game that was already impressive on consoles and (probably) pushed them to their absolute limits.

Even as I was going through the story for my second time, playing Red Dead Redemption 2 on PC gave me a renewed appreciation for the depth and scope of its world, with the PC version giving an even better window to view that world in finer detail. That said, like the game itself, be prepared to have a little patience in adjusting to the PC version’s quirks and technical demands. Eventually, you’ll find yourself being able to fully enjoy this marvelous world to its fullest potential.

The post Red Dead Redemption 2 on PC is a Beautiful But Demanding Visual Showcase by Ryan Meitzler appeared first on DualShockers.