After months of going without any new content–which players have been quite vocal about–Red Dead Online, the multiplayer component of Red Dead Redemption 2, finally got an update. For me, this update marked an opportunity to hop back in my cowboy boots and ride off to the west once more. After maxing out my rank in the last role, I didn’t really have many reasons to keep playing Red Dead Online, so the question this time around was if this update could keep me hooked for a long while.

So far, it’s not seeming like that’s the case. The biggest part of Red Dead Online‘s newest update is the addition of the Naturalist role. Much like the Trader, the Naturalist role focuses heavily on the wildlife population in the Red Dead world’s five states. However, the focus isn’t on hunting for pelts, but instead on cataloging and collecting information. It’s less revolvers and whiskey and more cameras and notebooks.

Starting the Naturalist role doesn’t take that much – a mere 25 gold bars, which aren’t all that hard to come by in-game. Players are immediately given some new sedative ammo and tasked with cataloging each and every animal they can find across the five states, from alligators to skunks.

Similar to the Collector role, each animal is part of a group based on its natural environment. Hand in a bunch of cataloged info for all the animals in one environment, and you should get handed a fat payday, although I haven’t gotten there yet. As it turns out, it takes quite a long time to find fourteen woodland animals. That goes double when, well, the work is doubled.

Here’s the list of what you need to do to get all the info you need to catalog an animal: track, kill, skin, study, sedate, take a sample, and photograph them. The catch is that an animal that you get a sample from can’t be skinned and vice versa, meaning you’ll need two of all of these animals at a minimum to complete a set.

Of course, if you don’t want to peacefully observe animals, rending them for their skin is still made viable by a second NPC that the Naturalist role introduces; Gus MacMillan is his name, and fur clothing is his game. Gus works a lot like the Trapper in Red Dead Redemption 2 – bring him perfect pelts and carcasses, and he’ll sell you some specially tailored clothes. Fox hats, furry chaps and massive coats made of bears are all on his menu if you’re willing to bring your hunted goods to him instead of Cripps.

Gus also offers a new group of entirely game-changing items that, so far, seem like they make the Naturalist role essential for anyone taking Red Dead Online seriously: trinkets. These little charms fashioned out of jewelry from the Collector role and animal products grant players with special passive benefits. These range from the mundane doubling of herbs you get when you go foraging to permanently decreasing the rate at which your horse’s health and stamina cores drain by. Those benefits–along with the others you can gain from all five trinkets Gus can make for you–have the potential to completely change Red Dead Online, especially if more are added.

While I do appreciate a hat with a face as much as anyone else, the Naturalist role isn’t really giving me what I wanted. Red Dead Online has plenty of ways to earn dosh, and they’re only somewhat of a grind. However, the game is severely lacking in the PvE department. Sure, bounty hunting is good and fun, but how many times can you go after the same Wanted men and women before it gets tedious (or neigh impossible) without a posse at your back? So far, the Naturalist role offers one chance at PvE content with missions to kill poachers, but other than that it’s rather quiet. 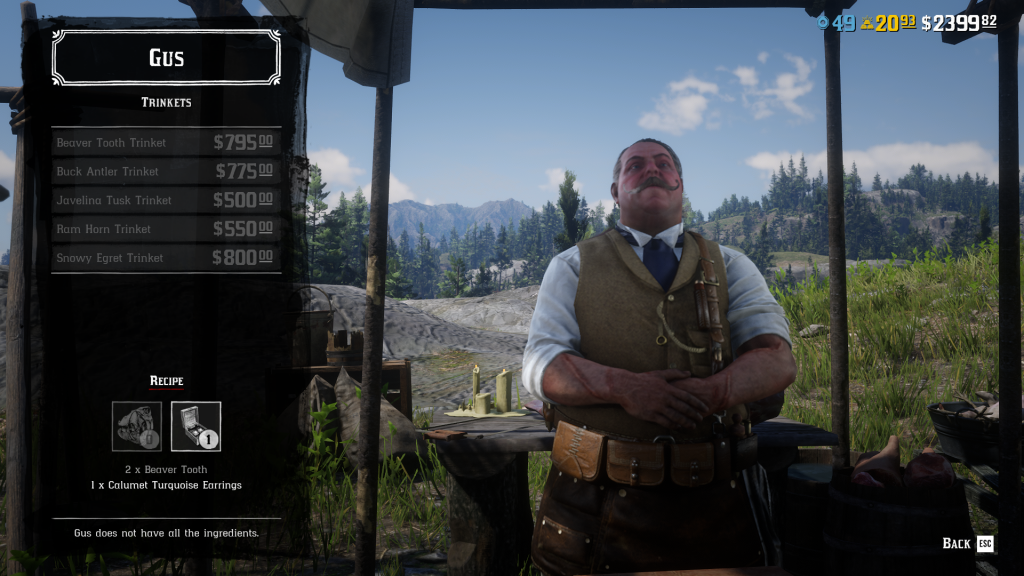 “The Naturalist role offers one chance at PvE content with missions to kill poachers, but other than that it’s rather quiet.”

Now, don’t get me wrong, I love seeing Red Dead Online embrace its relaxing qualities. The game by itself has that attribute; simply take a trot on your steed through any of the game’s settings (hopefully without getting brained by a random player speeding past) and take a listen to its soft, ambient tracks. It’s downright stress-reducing, but for me, there’s enough to kick back and relax to in Red Dead Online already. What the game needs now more than ever is a kick in the ass, something to get players’ blood pumping and adrenaline going – and that sure doesn’t mean taking photographs of every kind of bunny.

That being said, the Naturalist role does offer some opportunities for more exciting content. Once you reach level five in the role (I’m sitting at three right now), you can access missions that revolve completely around legendary animals. While I can’t speak to the content of these missions, searching for a legendary cougar or alligator is an undeniably exciting change of pace. Usually when aggressive animals appear, they do so as a random encounter. To instead go up against one with the task (unassumingly) of sedating the thing and collecting a sample–hoping it doesn’t wake up to make me a tasty snack–is appealing.

Keep in mind, these are my first impressions of the Naturalist role, based on about four hours of play. As I continue exploring the wildlife from Ambarino to Lemoyne, my overall experience with this new content for Red Dead Online may change. In fact, I hope it does, because so far I’m not all that inclined to play far past this week.

The post Red Dead Online’s Newest Update is Too Little Too Late by Otto Kratky appeared first on DualShockers.