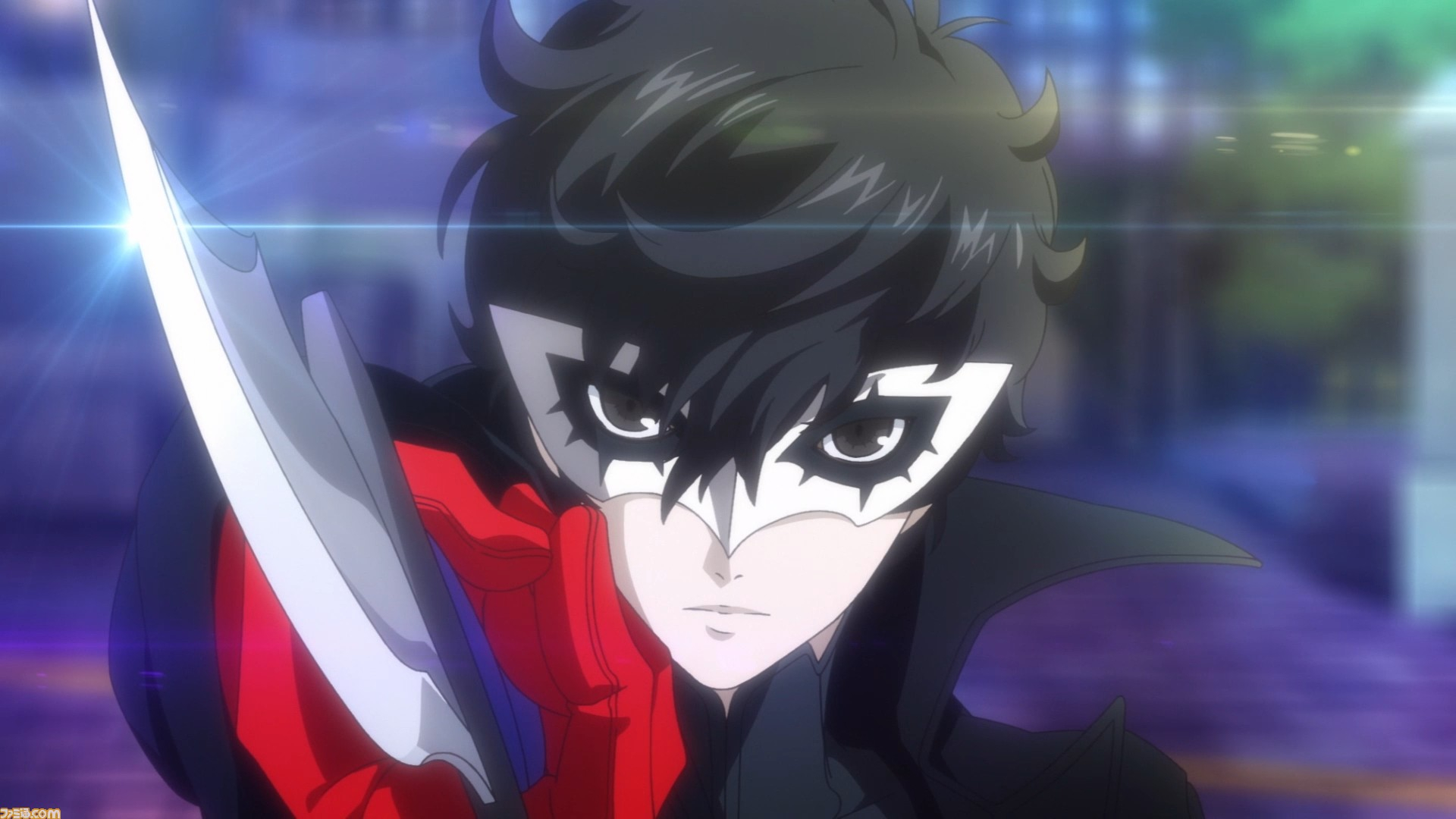 Even though I spent just short of 100 hours with Persona 5 Royal last summer, it was arguably the fastest 100 hours that I’ve likely spent with any game. Banding together with the Phantom Thieves to steal hearts and take down the most corrupt denizens of Tokyo never lost its charm thanks to its effortless style and memorable cast of characters. To be honest, I wouldn’t have minded spending even more time with Joker and the gang for a bit longer. That’s why I’m glad that Persona 5 Strikers is answering that call, and though it may look a bit different than the original, it has all the heart that made the Phantom Thieves’ first adventure thrilling to play through.

After our first preview of Persona 5 Strikers in December (when it was officially announced for a Western release), I’ve been able to get some hands-on time with the final version of the game before its release next month. Playing through the PS4 version (on PS5), the first few hours of playing Strikers gave me a much better feel for not only how it plays, but to see how it brings players back into the world of Persona 5 and reacquainting them with its familiar characters. Though it’s billed as a “spin-off” in the series, in nearly every way, Persona 5 Strikers feels like a true successor to Persona 5, even with a substantial shake-up in how it plays.

The storyline of Persona 5 Strikers picks up about six months after the events of Persona 5, with Joker and Morgana reuniting with the rest of the Phantom Thieves as they plan out a summer road trip across Japan. With the band getting back together for a summer of hanging out in various cities across the country, in true Persona fashion, things take a turn for the supernatural once several beings appear that are capturing the desires of others and spurring the Phantom Thieves into action to stop them.

From there, it isn’t too long before Persona 5 Strikers brings players through the familiar rhythm of its predecessor. Joker and Morgana have a welcome reunion with the rest of the team–Futaba, Haru, Ann, Ryuji, Makoto, and Yusuke–and soon enough they’re back fighting Shadows in the Metaverse. Throughout the summer, the Phantom Thieves have a number of foes that they’ll have to contend with to set things right and restore order in Japan, starting with a fashion star and idol named Alice that takes her fame and glam a little too far. 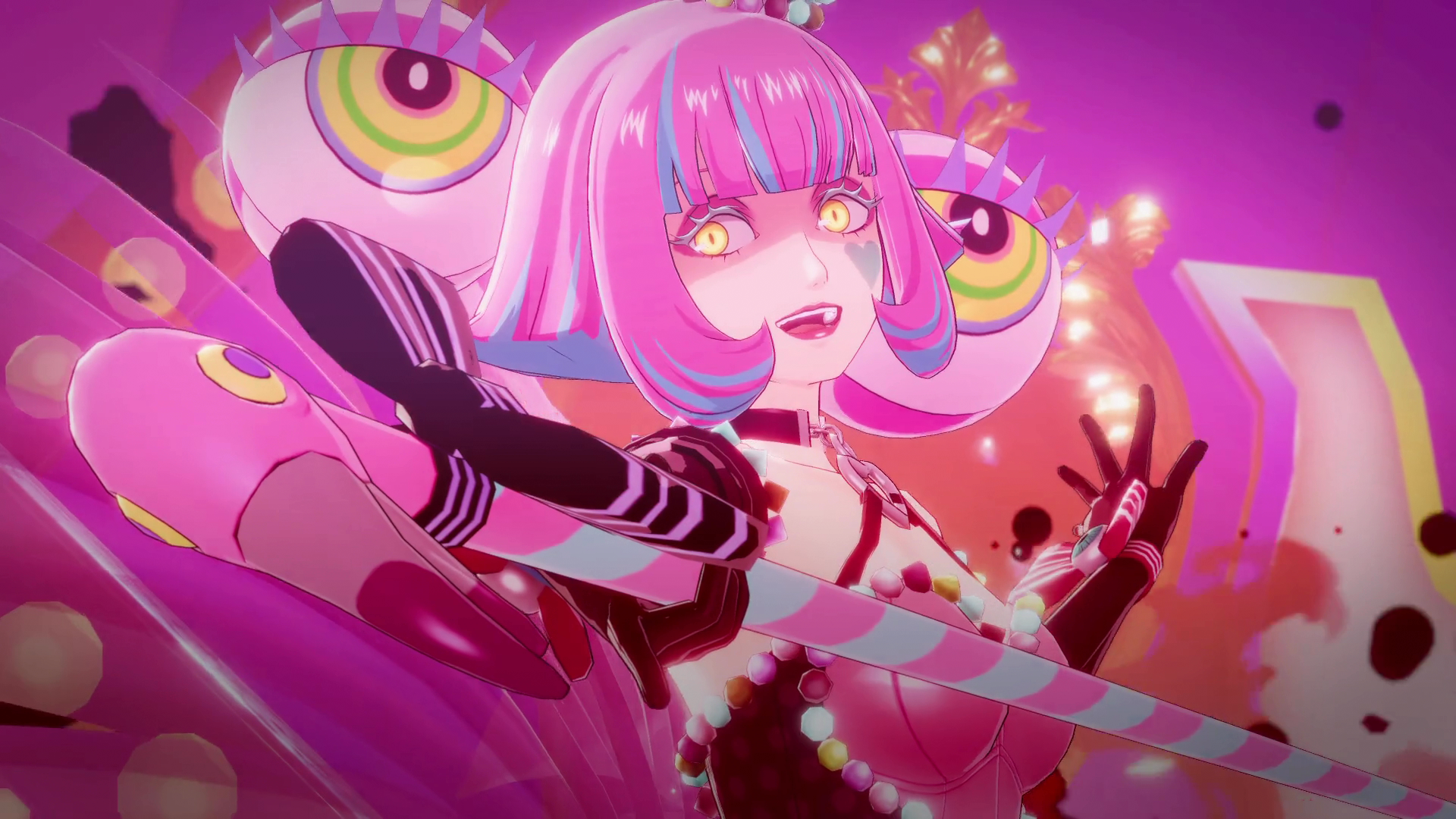 “In nearly every way, Persona 5 Strikers feels like a true successor to Persona 5, even with a substantial shake-up in how it plays.”

If you put them side-by-side, the opening hours of Persona 5 Strikers would probably look indistinguishable from the original Persona 5, especially once you start revisiting familiar locations like Cafe Leblanc or the many shops and alleys of Central Street. In that way, it’s fitting to see how much Omega Force and P-Studio wanted Strikers not just to bring back the characters we know and love from the original, but to really make it feel like a continuation of the Phantom Thieves’ story (though without the story additions that we saw from Persona 5 Royal).

Where Strikers mainly diverges from Persona 5 is in how it plays, with the turn-based RPG systems of the original instead taking the form of an action-RPG. Strikers is by all accounts a “Musou” title in the tradition of Dynasty Warriors, where you can control Joker and the rest of the Phantom Thieves as they hack and slash their way through hordes of enemies while exploring Jails (this game’s version of the Palaces from Persona 5). 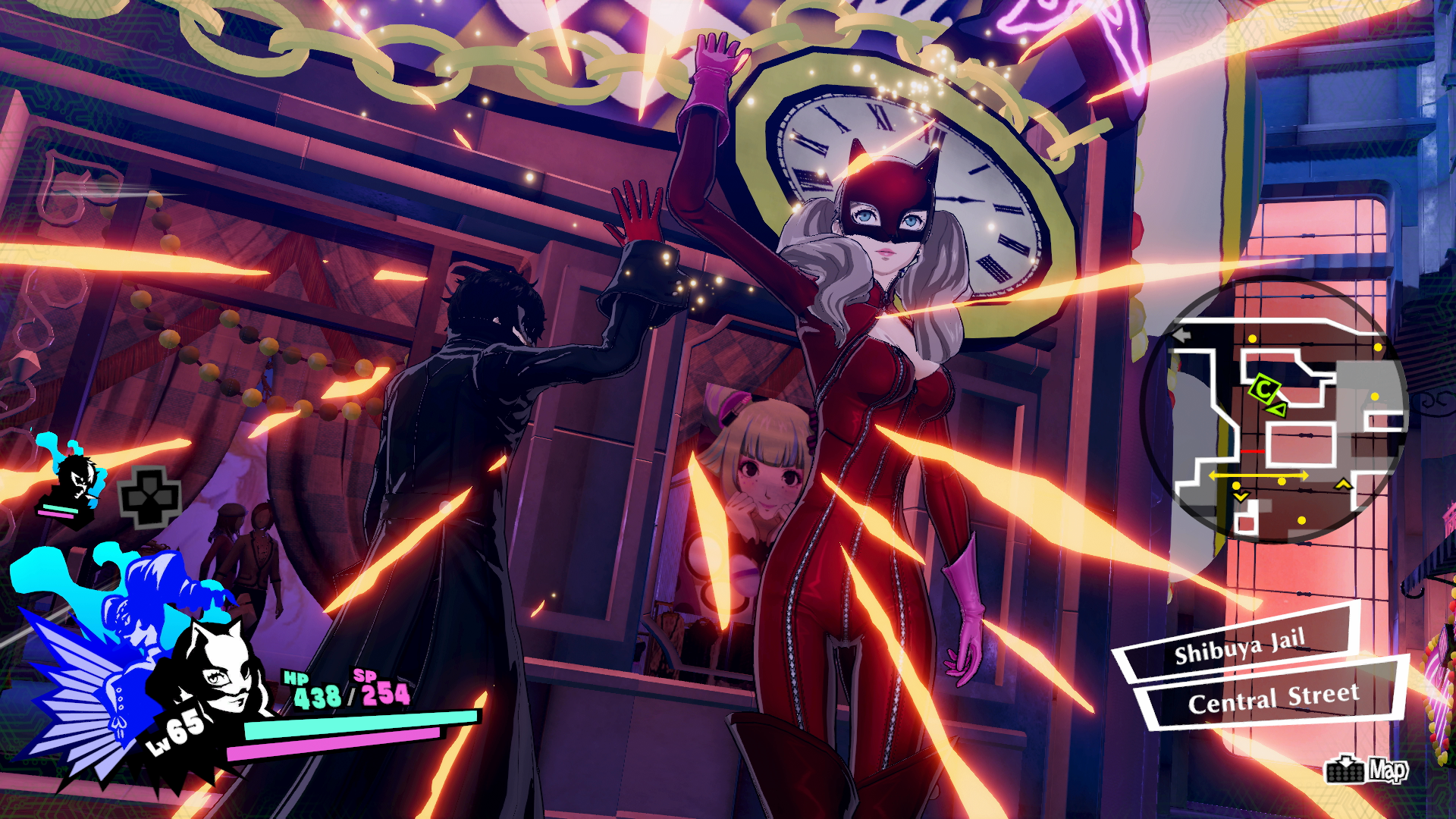 “Where Strikers succeeds is in drawing from the RPG elements of Persona 5 to add some depth beyond just hacking away at huge groups of enemies.”

This of course isn’t the first time that we’ve seen Musou-style takes on popular game series, with Hyrule Warriors, Dragon Quest Heroes, and Fire Emblem Warriors all bringing their respective franchises into Omega Forces’ fold. However, more than the rest, Persona 5 Strikers manages to really bring in the style and gameplay elements that made Persona 5 such an energetic spectacle, and its combat especially is a great translation of the action-packed, stylized experience of the original.

Where Strikers succeeds is in drawing from the RPG elements of Persona 5 to add some depth beyond just hacking away at huge groups of enemies, as Joker and the rest of the Phantom Thieves can draw on the power of their Personas to strategically wipe out their foes. Summoning a Persona freezes time and gives the player a chance to select a specific attack and to strategize where it’s best to land an attack. In this way, Strikers finds a solid middle-ground of the real-time, fast-paced combat of Musou-style games, while also ensuring that the game feels in line with the turn-based RPG roots of the original. 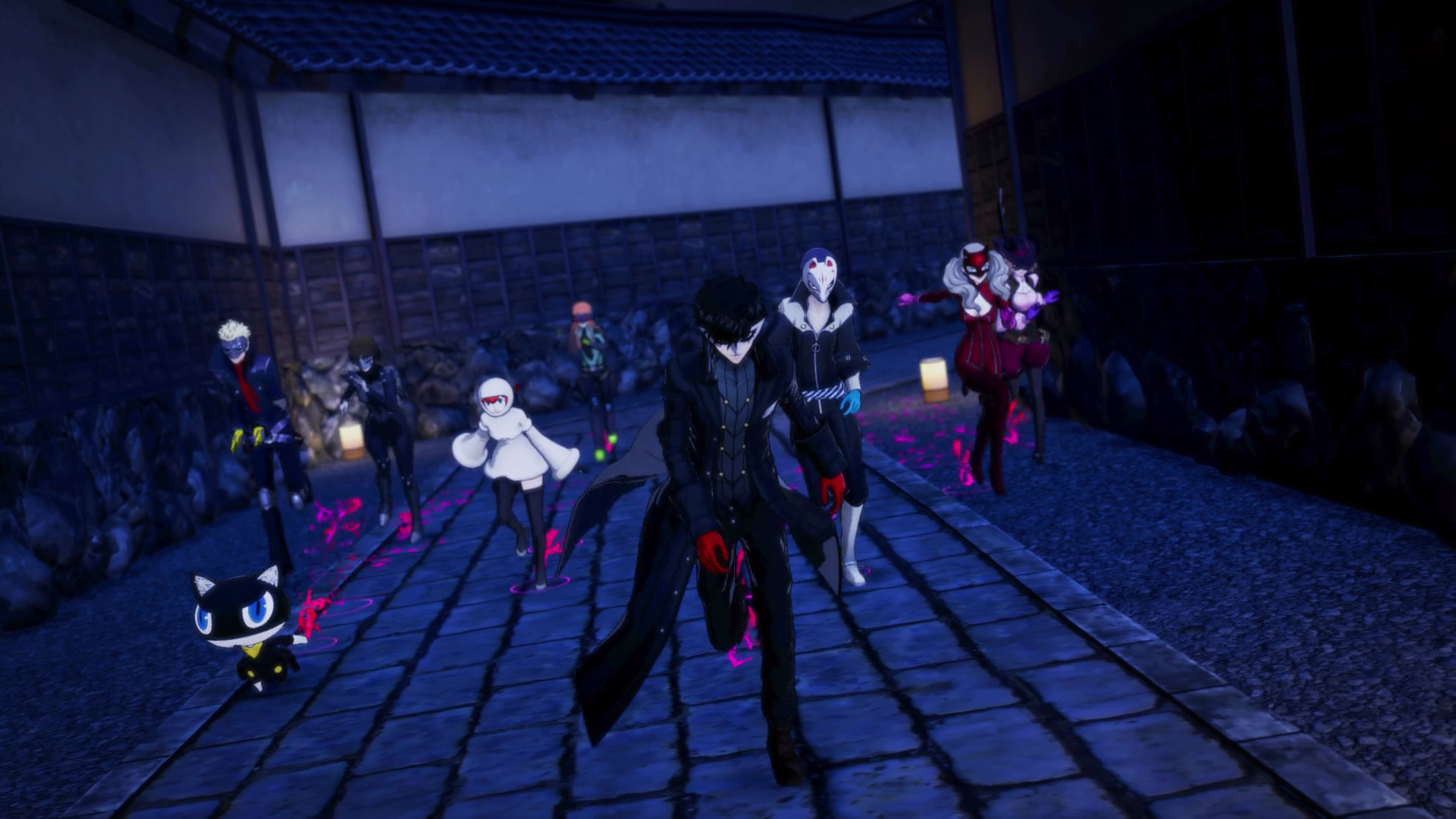 “Strikers finds a solid middle-ground of the real-time, fast-paced combat of Musou-style games, while also ensuring that the game feels in line with the turn-based RPG roots of the original.”

Notably, Persona 5 Strikers also accommodates its more action-RPG style of play with larger environments and verticality, leaning into the Phantom Thieves’ emphasis on stealth and exploration. Throughout the first Jail that I played for the preview, which takes place in Alice’s vision of Shibuya as a twisted amusement park, there are numerous areas where players can find hidden pathways and Treasures, or to set themselves up for an ambush against unsuspecting enemies. Playing into the infiltration aspects of the original, Strikers heavily encourages sneaking around enemies, especially to prevent alerting other enemies and locking players out of valuable gear and chests to find if they’re caught too many times by enemies.

Maybe even more than the original Persona 5, Strikers throws a lot at you in combat, especially with the switch to a more action-heavy style of play, that might feel a bit overwhelming at first. Along with having to navigate through big groups of enemies, the introduction of more RPG-like elements–such as status effects, enemy weaknesses, and more–to its Musou-style gameplay can sometimes make an already chaotic experience even more difficult to follow. The camera also can feel a bit like its own enemy to face, as it’s pretty easy to be overwhelmed by enemies or to unprepared for an attack coming at you from off-screen. 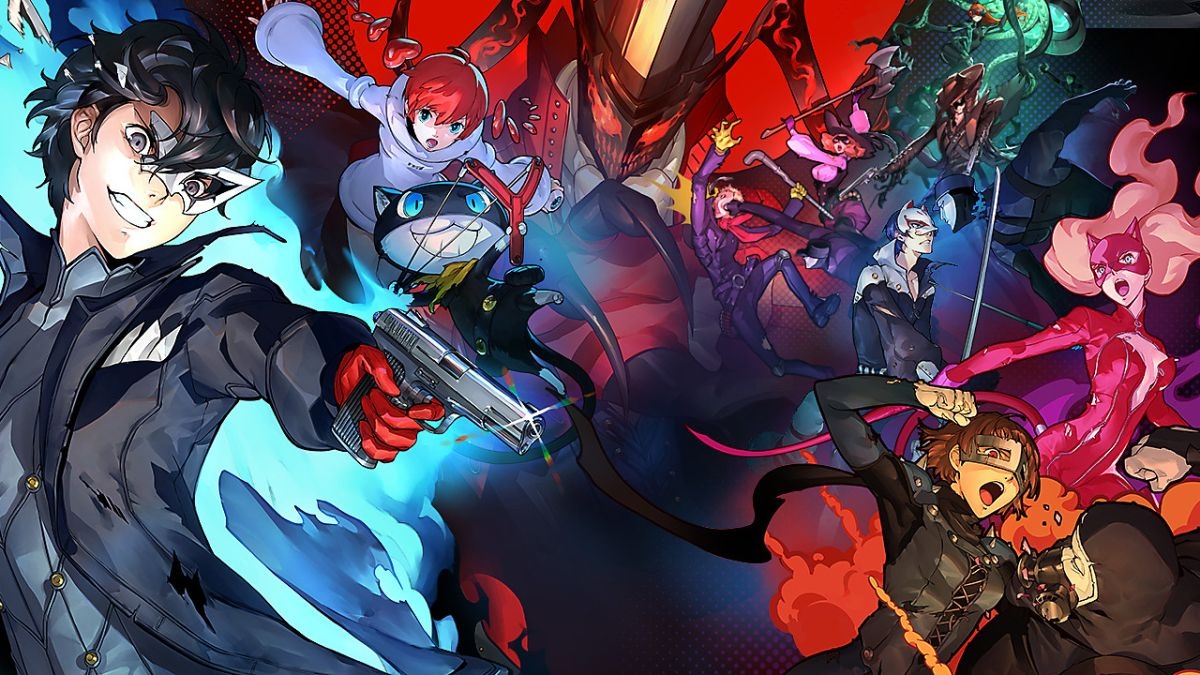 “It feels good to be back with the Phantom Thieves, and what I’ve played of Strikers so far has me excited to continue stealing more hearts with them.”

Aside from those small critiques, what I really came away with from my hands-on time with Persona 5 Strikers is how well it captured the energy and style of Persona 5 in the transition to a completely different style of play. From Baton Passing as Joker to another Phantom Thief, or calling on my party to deal massive damage in a flashy All-Out Attack, Strikers takes nearly everything that I loved about Persona 5 systems and adapts them in a way that is just as thrilling to experience while fighting off Shadows and trekking through Japan.

While I still have quite a ways to go through Persona 5 Strikers, the game’s first few hours have definitely left a lasting impression and have me looking forward to the rest of what the Phantom Thieves’ latest adventure has in store. Though it’s a big change from the original, Strikers finds a successful balance of the signature energy and style of Persona 5‘s gameplay and imbues it with some life of its own. It feels good to be back with the Phantom Thieves, and what I’ve played of Strikers so far has me excited to continue stealing more hearts with them.

The post Persona 5 Strikers is An Exciting Reunion Tour for The Phantom Thieves by Ryan Meitzler appeared first on DualShockers.

How to Defeat Nihil in Warframe After His Returnal to the Game
Final Fantasy VII Remake Part 2 – New Update From Tetsuya Nomura
Persona 5 Strikers – How Many Jails Are There to Take Down?
Valheim Sneak Skill – How to Use Stealth, Level Up and What The Max Level Bonuses Are
Pokemon 25th Anniversary Merch – Everything Needed to Celebrate in Style