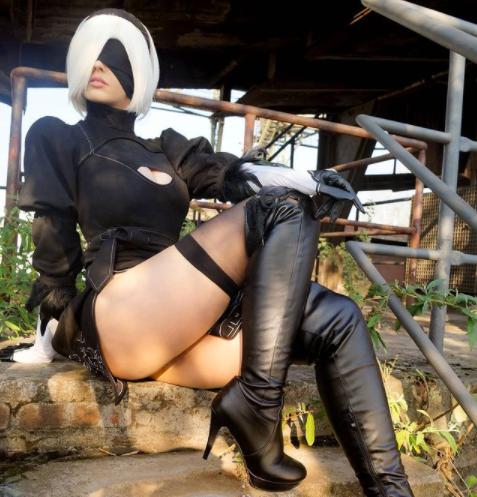 “Everything that lives is designed to end. We are perpetually trapped in a never-ending spiral of life and death” – 2B, Nier: Automata.

Nier: Automata, developed by PlatinumGames, intrigued players everywhere when it was released for PlayStation and PC on 23 February 2017 and even today, gamers hold this critically-acclaimed action role-playing title in high regard.

Probably the most recognizable character in Nier: Automata is 2B – a YoRHa android created to battle the machine lifeforms that have invaded the planet on behalf of the surviving humans. Due to 2B’s unique appearance, cosplayers everywhere try to recreate the look of this protagonist, but few perfect it.

Thankfully, cosplayer Lunara takes 2B’s persona and completely makes it her own.

Lunara, aka lunarakitsune on Instagram, is an artist, gamer and cosplayer. In her latest cosplay, we see Lunara sport 2B’s iconic eyewear which is referred to as a “military visor” or “goggles.” in the game that apparently allows 2B and other YoRHa units to see things that they wouldn’t normally be able to see that help them in battle situations.

Even though 2B’s sense of style in Nier: Automata has been described as overly sexualised in Japan, her outfit is actually taken from the Gothic Lolita fashion with some added twists of her own, of course. Lunara takes this inspiration and runs with it as she portrays a fantastic looking mirror-image of the protagonist.

Lunara has also cosplayed as many other characters that you can check out right here but be warned, many are NSFW.

The post Nier: Automata’s 2B Knows How to Make an Entrance in Latest Cosplay by Rachael Fiddis appeared first on DualShockers.