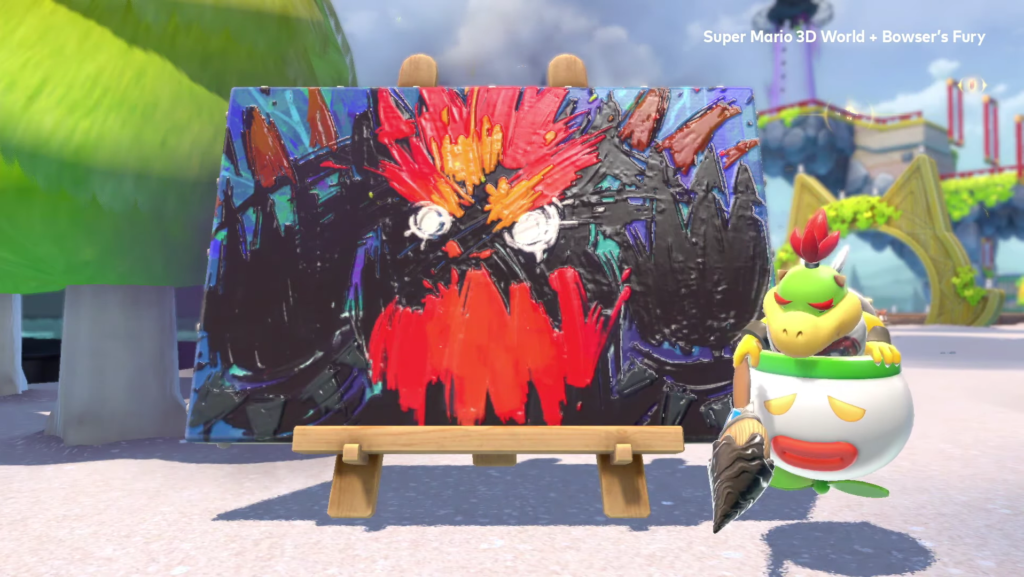 Super Mario 3D World will play much like it did when it originally released. Mario can still dress up like a cat, climb walls, and meow, just like the rest of the playable cast. However, instead of limiting players to couch co-op, the game will also feature online co-op this time around. With a Nintendo Online subscription, up to four players can get together and play through the entire game. The game is also adding a photo mode, filled with stickers and stamps to pretty up any moment you can capture.

Of course, the big addition that Nintendo goes over in this new trailer is Bowser’s Fury, a standalone title. Bowser’s Fury is a short, self-contained adventure set on the islands of Lake Lapcat. While the islands are idyllic and peaceful to many, they’ve only enraged Bowser, causing him to grow in size and anger. To protect the islands, Mario must collect Cat Shines to unlock a giga cat bell, giving him the power to combat Bowser’s new, terrible form.

Bowser’s Fury is taking an open approach, letting players explore the islands as they wish. It seems to be more akin to Mario Odyssey than 3D World in this way, right down to the way Cat Shines are scattered around the map. Mario will also be teaming up with an unlikely ally in this adventure, Bowser Jr. It’s not clear why the terrible tyke wants to fight his father, but it opens up the potential for co-op. Another player can grab a joycon and fill the shoes of Bowser Jr., attacking enemies with his paintbrush. Players can also use added amiibo functionality to give them a powerful boost.

The bright world of Lake Lapcat changes once Bowser wakes up though. When he’s active, a terrible storm arrives, and spikes from Bowser’s shell begin falling from the sky. Bowser himself will also attack Mario in this form, releasing massive, sweeping beams of energy. Luckily, Bowser can only stay furious for so long before going back to sleep.

Hitman 3 Players on PC Will Have Some Difficulties for Transferring Their Progress from Hitman 2
Ace Combat 7: Skies Unknown Celebrates Over 2.5m Units Sold with Downloadable Wallpaper
FIFA 21 — How to Complete the Layvin Kurzawa Player SBC
Final Fantasy XV Leaves Xbox Game Pass on PC and Consoles Next Month
The Nintendo Switch is a Good Sign Nintendo Needs to Stop Innovating