It was recently announced that the Marvel’s Avengers pre-order is now live, with a variety of different versions of the game you can choose from. Similar to any other game release, there will be a number of different editions of the game, each with its own bonus content. So, what is in the Marvel’s Avengers Collector’s Edition (dubbed “Earth’s Mightiest Edition”), Deluxe Edition, and Standard Edition? Here are all the details you need to know before committing to your marvelous purchase. 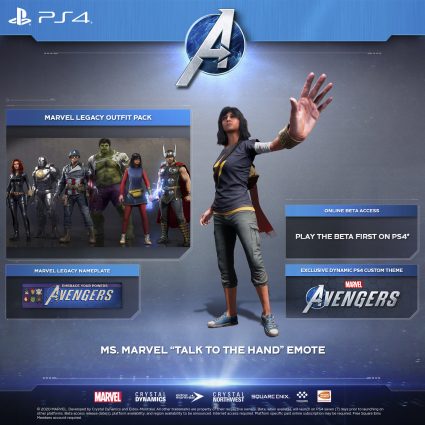 On PlayStation Blog, Crystal Dynamics Community & Social Media Manager Andy Wong discusses the many editions of Marvel’s Avengers, as well as it’s pre-order bonuses. While much of what was discussed were the exclusive offers on PS4, but it seems some of the pre-order content will also be available for those who purchase the Xbox One or PC versions early, as well.

The Marvel’s Avengers Standard Edition will come with the base game and access to the beta. While the beta has yet to be scheduled, PS4 players will be able to access it 7 days early. It will also include the Marvel Legacy Outfit pack, which features costumes for Captain America, the Hulk, Thor, Iron Man, Black Widow, Ms. Marvel inspired by key moments in each character’s history. There is also a Marvel Legacy nameplate that can be used with any of the Avengers.

The PS4 version will include a Marvel’s Avengers dynamic theme which sports a “slick” hex pattern. There will also be a Ms. Marvel “Talk to the Hand” emote (seen in the picture above), a pre-order bonus exclusive to Sony’s console platform.

It is important to note that these are pre-order bonuses. Besides the game, this content is available only to those who purchase the game before its release date.

The Marvel’s Avengers Standard Edition is $59.99. 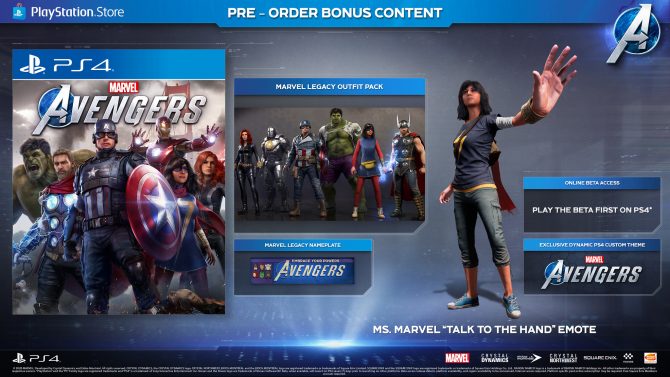 The Marvel’s Avengers Digital Edition is available exclusively on the PlayStation Store. It includes everything from the Standard Edition, in addition to a Ms. Marvel nameplate and 1,000 credits you can use for in-game customization options. 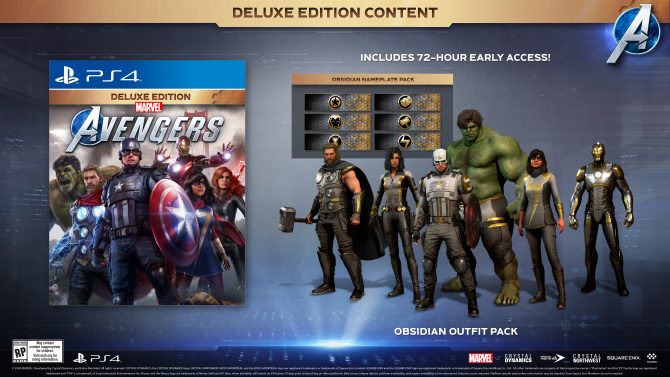 The Marvel’s Avengers Deluxe Edition includes even more in-game items for you to use on the playable heroes. This edition includes the Obsidian Outfit pack, which features metallic, golden accented versions of the heroes base uniforms. It also gives Black Widow black hair, which is kind of jarring.

Probably the most notable feature of the Deluxe Edition is its early access to the game. Purchasing this edition will give you 72-hour early access to Marvel’s Avengers, which gives you a head start into what looks like a pretty devastating day for Earth’s mightiest heroes.

If you purchase the physical version of the Deluxe Edition, you’ll receive a 1-month subscription to Marvel Unlimited. This is an online subscription service that gives you access to a ridiculous amount of digital comics from Marvel. Pre-ordering the Deluxe Edition will also get you all of the Standard Edition bonuses from above.

The Marvel’s Avengers Deluxe Edition will be $79.99. 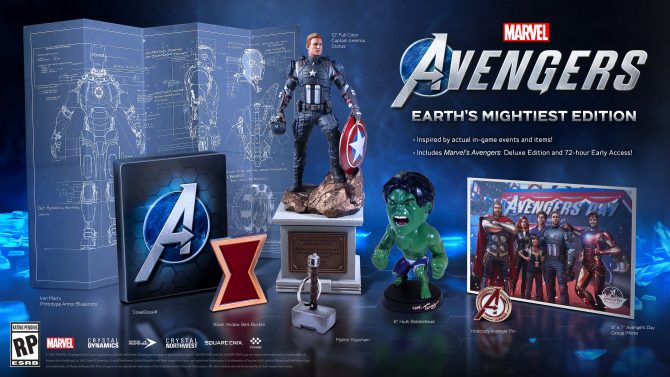 The Marvel’s Avengers Collector’s Edition is aptly titled Earth’s Mightiest Edition includes all the physical goodies any Marvel nerd could ask for. Before we get into everything included in this rather costly edition (this will set you back $199.99), it should be noted that it does come with everything from the Deluxe Edtion. Additionally, if you pre-order this collector’s edition, it comes with all the previously mentioned pre-order bonuses. It should also be noted that this edition is only available for PS4 and Xbox One.

The most impressive piece from the Marvel’s Avengers Earth’s Mightiest Edition is the 12″ full color Captain America stature. Steve Rogers stands atop a pedestal that has a quote from the man himself. The keychain of Thor’s hammer Mjolnir is blocking a bit of the quote, but I believe this is what it reads:

“The nation was founded on one principle above all else: The Requirement that we stand up for what we believe, no matter the odds or the consequences.”

Also included is a Hulk bobblehead, which was featured from the Kamala trailer, a Black Widow belt buckle, a commemorative photo of the Avengers from A-Day and a whole lot more. Here is the full list:

Marvel’s Avengers is slated to launch on September 4, 2020, for PS4, Xbox One, and PC. If you want to see our thoughts, here is our latest preview.

The World Ends With You — The Animation Reveals New Visual Featuring Full Characters
Atelier Ryza 2 Gets New Trailer, Gameplay At TGS 2020, Producer Comments
Spelunky 2 Will Launch Without Online Co-op on PC
Hyrule Warriors Age of Calamity Director is Very Happy With Fan Reaction So Far
Former President of Rockstar North has Raised $42 Million for a GTA Rival of His Own