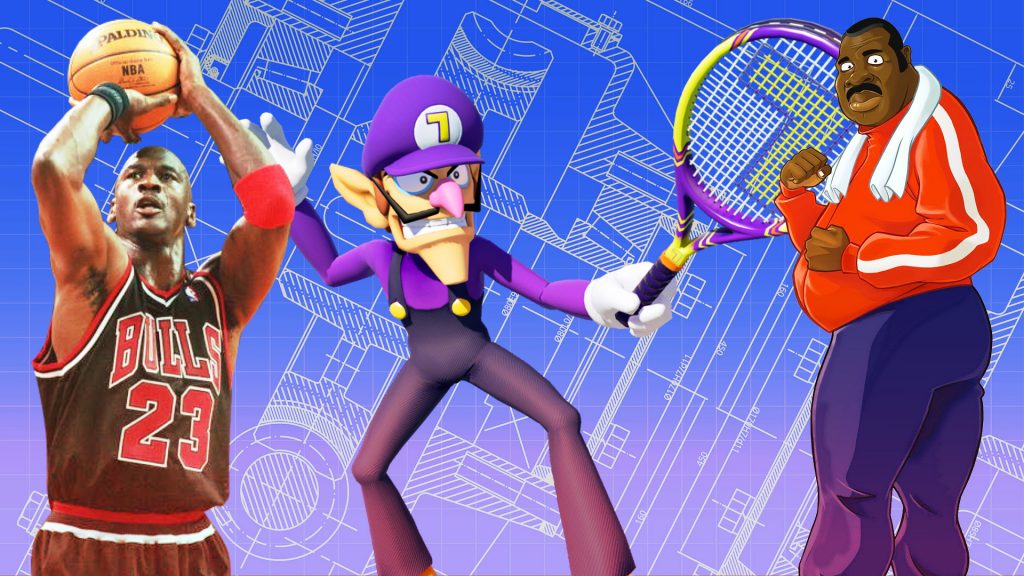 Thus far, these lists have been relatively easy to put together. After all, whether you’re platforming in 2D or 3D, you’re still jumping around. Action-adventure is a little murkier, but even there, you basically know what you’re getting yourself into. However, when trying to build the ultimate sports game star, we ran into some obvious difficulties.

What sport are you playing? How do you possibly weigh the difference between a silky smooth jumper and a devastating stiff arm? We decided to just do the best we could to build the Bo Jackson of virtual sports. Except without, ya know, the crippling hip injuries that will derail his career before it really gets started.

So, what does this monstrosity of bulging muscles, computer-like intelligence, and boyish charm look like? Well, give our creation a look below, and be sure to let us know why we’re wrong in the comments below. And remember, the only rule is we can only use one character per game entry. Otherwise, this would just be all Backyard Sports characters.

Tom Brady in Madden NFL 09 is the football savant’s most cerebral version. While his arm skills are worth salivating over, it’s the star’s mind that makes him one of the all-time greats. And while he lost that season in real life due to injury, his virtual counterpart tore up the NFL with reckless abandon.

Likewise, there aren’t many athletes that possess the same killer instincts that Tiger Woods had in his heyday. While we can argue over which video game version is his best, you can’t tell us there’s a virtual player who dominates with their brain and brawn more than Tiger did.

However, our ultimate choice is Pablo Sanchez from the Backyard Sports series. Look at the young lad. If you’re on the playground and selecting your first pick for any sport based on appearances, Pablo is one of the last kids you pick. He’s short. He’s got a potbelly. Heck, he even pretends like he can’t speak English, tossing in an unneeded communication gap for literally no reason. But then you see him on the field.

Regardless of the sport, Pablo Sanchez is, in action, the most dominant athlete in the video game sports world. He is good at everything. Literally everything. That talent has to come from somewhere, and it’s definitely not his 8-year-old beer gut. He’s like that kid in intramurals who was a stud in high school but came to college wanting to party more than practice and got kicked off the football team. Now he looks out of shape, but if you give him a sliver of lane, he’ll still dunk all over you. Not that that specific situation ever happened to me, or anything.

Put that propensity to be great in a genetically superior body and you have something truly scary on your hands. 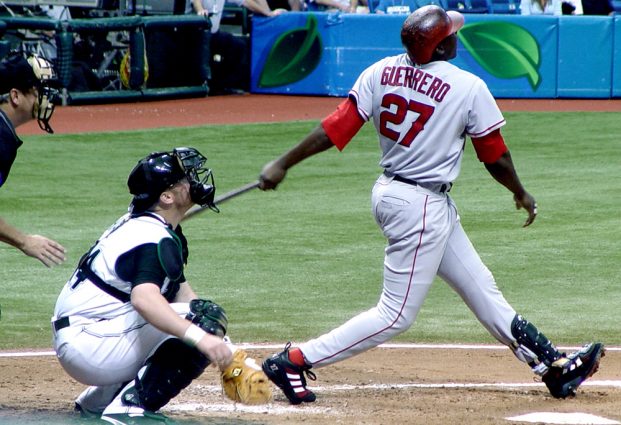 Barry Sanders is one of the best to ever lace up. What set him apart from other running backs was not just his other-worldly body control that let him slip away from would-be tacklers, but his vision to find a sliver of daylight where no one else could. Plus, he was the subject of one of the best video game commercials of all time.

Kobe, on the other hand, had that locked-in glare that made opponents whither late in games. The Black Mamba was one of the most intimidating players in the NBA. When he got serious, you knew you were in for a show.

However, our choice for eyes is Vladimir Guerrero. Vlad never saw a pitch he couldn’t hit. Just watch some of the garbage he’s able to get a hold of in this video. And, in MVP Baseball 2005, the man was absolutely dominant. Manny Rameriz gives him a run for his money, but Vlad is certifiably that dude. He hit pitches off the ground, for goodness sakes! 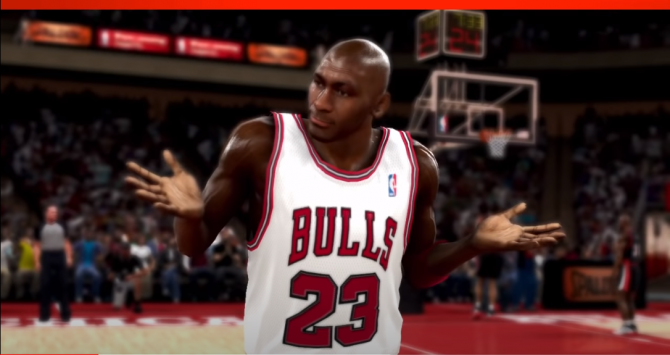 Please tell us you’ve watched The Last Dance by now. For sports fans, it is must-watch TV. Like, take a break from reading this, flip to another tab, and enjoy 10 hours of some top-tier content. Now that you’ve seen it, you know that MJ isn’t just the greatest basketball player ever. He’s also a truly next-level trash talker.

Sure, if our abomination had the booming voice of the Hangtime announcer, he’d be fun to hang out with. And, Quentin Sands certainly knows how to talk some junk. That said, Jordan takes it to a different universe. While some are going to say we’re wasting our Jordan slot on his mouth, others will remember he allegedly killed a man’s whole career just by talking to him. Ruthless. 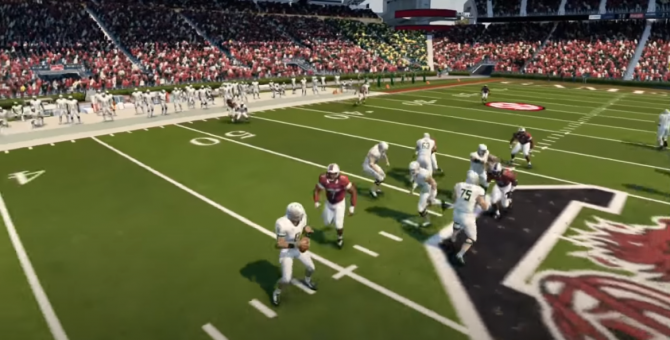 Dante Culpepper in Madden NFL 06 was an absolute hoss: impossible to bring down in the backfield and nearly unstoppable once he got up to speed on scrambles. His insane power would make for an excellent base for our monster.

Likewise, the Mailman was a force in NBA Jam. His defense and dunking were off the charts, making him the perfect counterpick when your friend inevitably selected Scottie Pippen and Horace Grant.

However, neither of those characters were inspired by this kind of real-world performance. That hit from Clowney might be the greatest hit anyone has ever laid out in any football game ever. Best of all, his NCAA Football 14 counterpart is capable of the same type of backfield destruction. Good gravy. 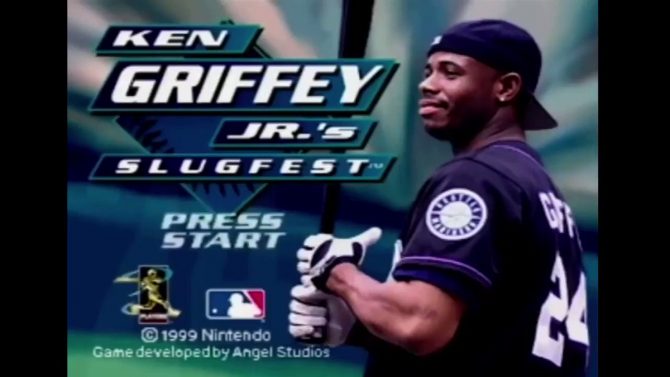 Some will probably balk at having Mike Vick’s arm as the option over his legs. That said, the sheer power that his Madden NFL 2004 character was able to generate essentially made EA rewrite the game’s defense for Madden NFL 2005 to compensate. The things he could do in that game were downright silly.

Another potentially surprising inclusion that comes due to our one character per game rule is Mike Tyson. While his turn in Punch-Out!! is legendary, we’re saving that game for something else. Iron Mike’s left arm is earth-shattering in the real and virtual worlds. Watch him throw punches as a 52-year-old man and then imagine taking one of those to the dome in his prime. No thanks!

But, for our money, we’re getting Griffey. If you were a ‘90s kid, there wasn’t a more lovable baseball star than Ken Griffey Jr. He has four different video games with his name on them and is among the best in every single one of them. We’d probably go with his Slugfest version, but you’re welcome to your preference. Regardless, there isn’t a left-arm we want more than The Kid’s. 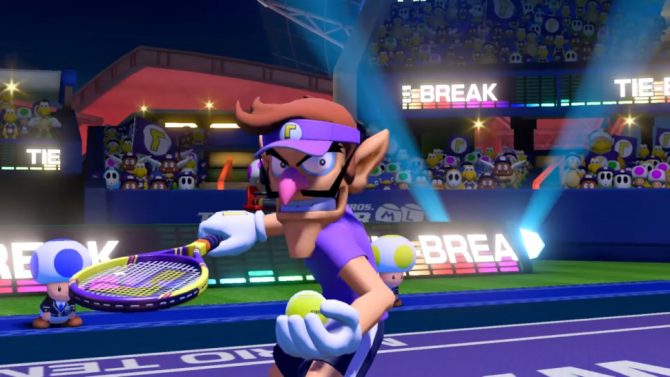 Steph Curry might just be the best pure shooter in NBA history. His touch from beyond the arc is without equal in the modern game and he makes full-court shots look routine. And Scott Stevens had one of the meanest right hooks in NHL Hitz. If you got into a fight with the New Jersey Devils’ man, you already knew the knockout was coming. But we can do better than either of those.

Waluigi was created in a vat at Nintendo for Mario Tennis. And, to this day, Nintendo refuses to allow him to take his talents to anything other than side games. They’re too scared to see what Waluigi could do to their poster boy in a mainline Mario video game.

We’re not afraid though. Instead, we’ll use what Nintendon’t and graft the best Wa brother’s arm onto our monster, turning his right arm into a machine of sports prowess. 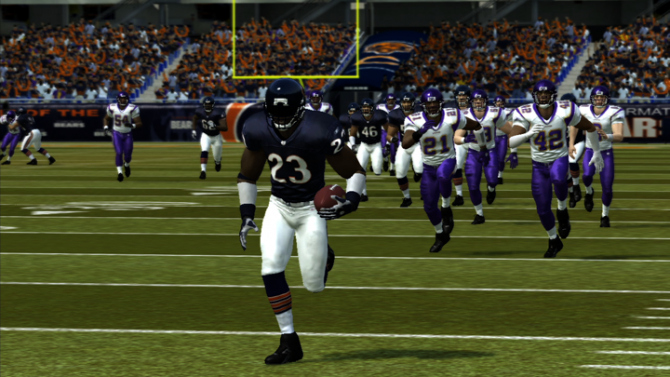 Excuse the potato quality, but watch this rocket Drogba delivers from almost the centerline in FIFA World Cup 2010. Sure, it’s on a lower difficulty, but the power that the man from the Ivory Coast possessed in that video game was astounding.

Tony Hawk brings a bit more finesse to the party. His level of control with his feet baffles the mind. Later games would let him do more with the board, but THPS3 is the series’ pinnacle. It’s the Hawkman at his best.

However, Devin Hester is the first Madden player to get 100 speed. Seeing him line up for a return caused grown men and women to immediately wet their pants. He was absolutely a game-changer in Madden NFL 08, and we had to include him here. 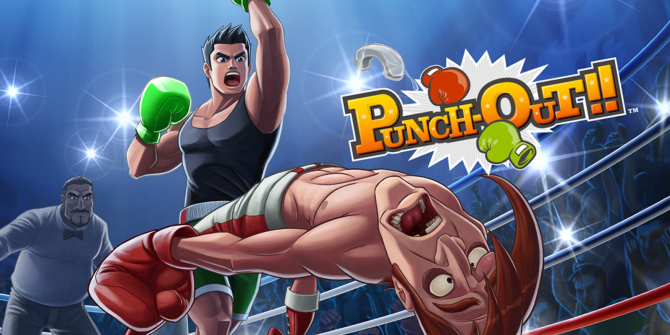 Sports aren’t just about your own personal skills. You need someone to teach you how to be great. Jordan had Phil Jackson. Brady had Bill Belicheck. Even an early prodigy like Cristiano Ronaldo needed a top-class manager in Alex Ferguson to completely bring out his visionary skill.

And so, our creation needs his own mentor. While we considered going with an all-time great player like Bo Jackson or an old-timer who still has it in Stretch, we ultimately went with Doc Louis.

After all, if he can take that chump Little Mac and teach him how to beat the video game version of Mike Tyson, imagine what he can do for our hulking behemoth. Our creation will not only outplay his competition but with Doc Louis’ help, he’ll outwit them too.

So there you have it. Our third video game creation is finished. Are there any changes you’d like to see? If so, let us know about them in the comments. And check back soon for our next dive into the wonderful world of human body modification. It’s sure to be a doozy.