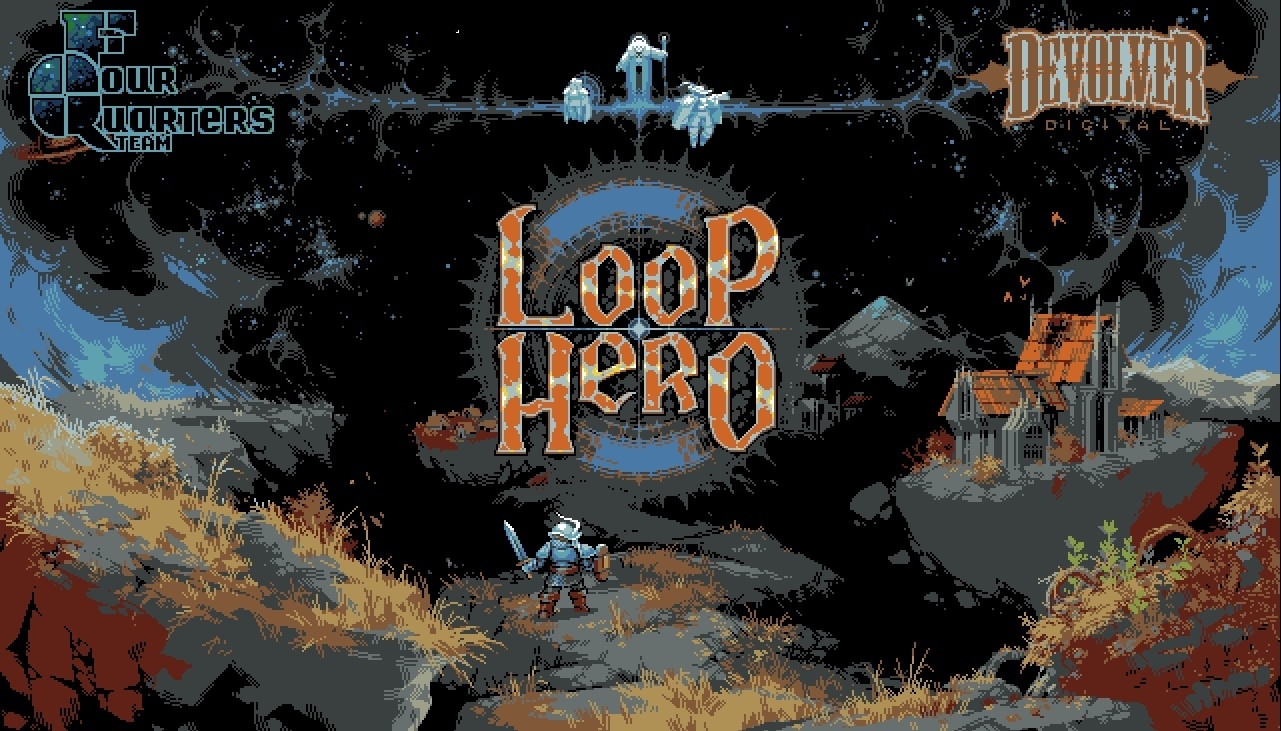 It’s still early on in 2021, but I might have already found my favorite game of the year. Loop Hero from Devolver Digital and Four Quarters is a mix of two of my favorite genres: roguelikes and idle games. It sounds like something I’d dream up during an especially great sleep; however, this thing is real. If you’d rather watch a video of the game in action, check out the video below that sees me trying my hand at a few early rounds.

Now, before I get too hyperbolic, it’s important to make the distinction between “favorite” and “best.” I fully realize that I’m incredibly biased toward Loop Hero. After all, you’re reading the words of a madman who has spent literally thousands of hours “playing” all kinds of clickers and idle games. I don’t know if it’s because my dad is an accountant, but when the numbers go up, so does my excitement.

So, while I absolutely love everything Loop Hero is doing, I don’t know if it’s for everyone. At its core, the game is very simple. You’re a fighter who has forgotten everything about their life and the world. In fact, the current world is now just a loop you can walk. As you move along the path, the hero picks things up and fights baddies. You have no direct control over these fights.

Instead, you’ll earn different cards and items as your hero wins fights. You can then use these to strengthen your hero, change the loop they’re walking on, or add to the world around you. The first thing is pretty self-explanatory. You give your fighter a sword, they can hit harder. However, the other two are worth talking about in more detail. 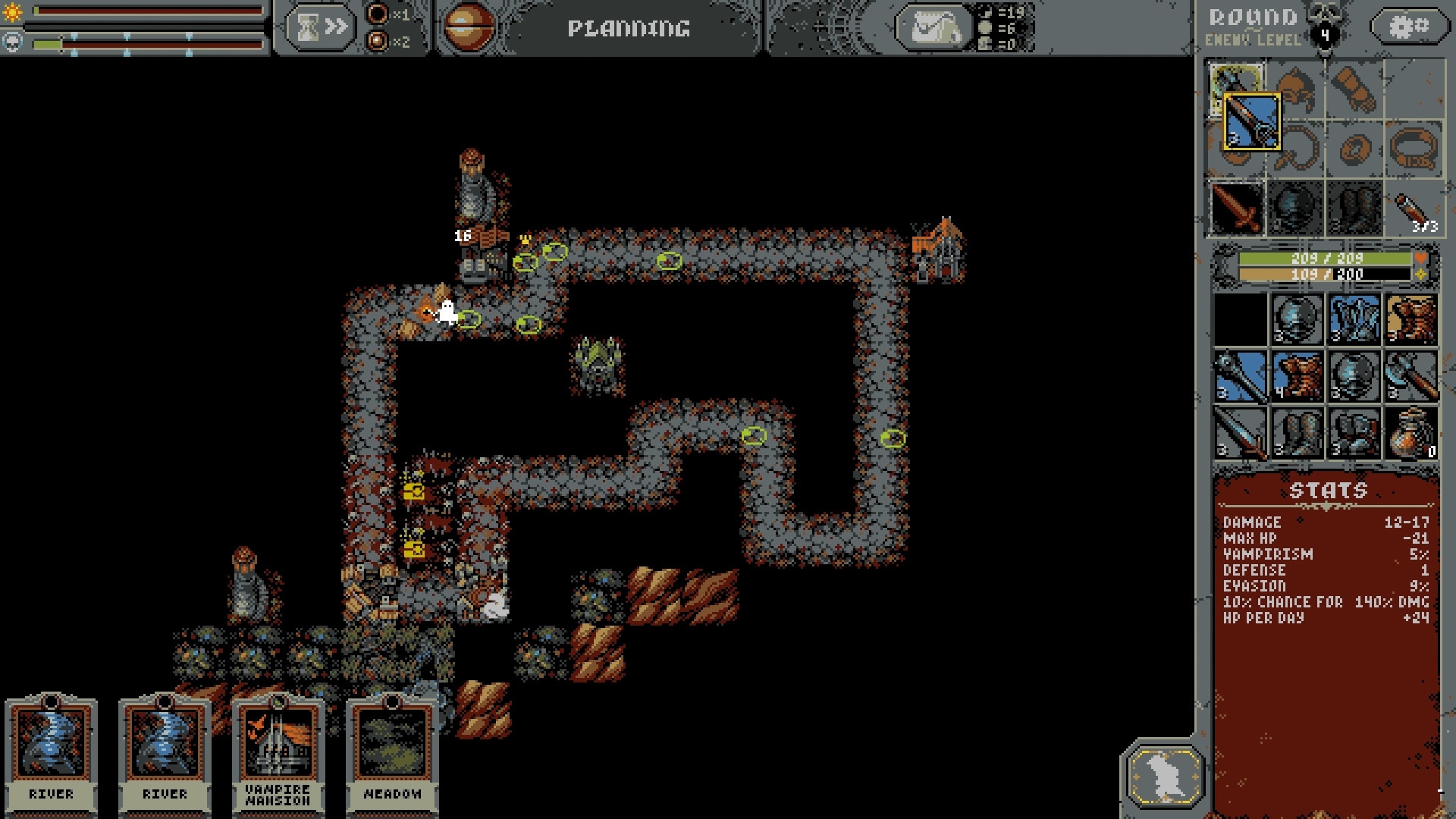 See, the changes you can make take the form of cards. You’ll get a card for a vampire mansion and playing that on the loop means you’ll now have to fight some bloodsuckers. As your character gets stronger through gear, it’s key to make the enemies harder. This both gets you even better equipment and moves you closer to fighting the boss.

Alongside these monster upgrades, you’ll also get all kinds of terrain. Dropping these on the map gets you crafting gear that you can use when you end the loop. At any time, you can stop your run to go back to your hub town and upgrade its various buildings. This, in turn, improves your hero in all kinds of different ways. However, it’s important to note that once you leave, the loop resets itself to zero.

It’s a fascinating blend of genres. The lack of direct control over your hero is such an important decision. This isn’t a game about quick reflexes or good gameplay. Instead, it’s about careful planning, on-the-fly number-crunching, and a bit of luck. 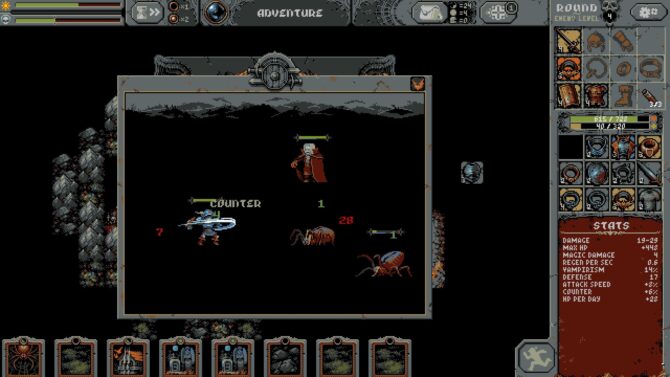 That combination of gameplay makes Loop Hero a title I can’t wait to play when the full version comes out. Currently, I’ve only seen the very early stages of all the systems. If Four Quarters continues to build on what I’ve already seen, I might be losing myself to this game. Please say a quick prayer for my wife and dog. They’ll need it.

I’d be doing you and the game a disservice if I also didn’t mention that both the art and music are top-notch. On the loop, the game looks pretty basic. It’s the style of graphics you’d expect from the NES days. However, the character art when you get into battle or conversations is truly sublime. And the music has that great, chunky sound you’d expect out of something that came out on SNES.

Loop Hero really is the total package for me. Obviously, I’m still incredibly early, but I cannot name a single thing the game doesn’t knock out of the park. It’s just absolutely phenomenal. Be sure to check it out when it launches on PC later this year.

The post Loop Hero is the Roguelike/Idle Game Combination I’ve Been Dreaming About by Ricky Frech appeared first on DualShockers.