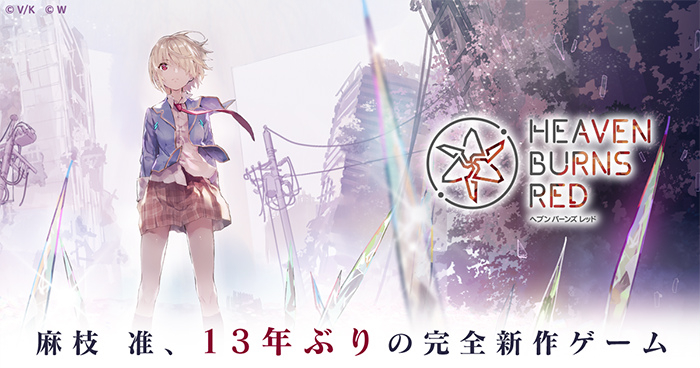 Heaven Burns Red is a joint project between Key and Wright Flyers Studios. WFS is a company behind multiple mobage such as Wild Arms Million Memories, and Danmachi Memoria Freese.

Key’s co-founder Jun Maeda, who penned most of their games and multi media projects such as Angel Beats, is the original story and main scenario writer for Heaven Burns Red. Meanwhile, the original character designs were by Na-Ga, Fumuyun, and Maroyaka. The character design and the visual above were handled by Yuugen, who worked on Gust’s Atelier series. The songs are by Jun Maeda and Yanaginagi.

In a message shared on Heaven Burns Red‘s official site, Jun Maeda most notably mentioned that the culture of playing visual novels on PC is disappearing. As such, Key, in order to survive, decided to release their next game on smartphones, which have a much higher player base. However, Jun Maeda stressed out that the essence of their games is still the same, and that Heaven Burns Red will make you laugh, emphasize and ultimately cry for its characters.
Jun Maeda also mentioned that new vocal songs from the game will be released once a month until it launches sometime in 2020.

An official twitter account was also opened for Heaven Burns Red, and a hashtag message campaign is ongoing to win a Shikishi signed by Jun Maeda, Yuugen, and Yanaginagi.

This is pretty interesting as more and more Japanese doujin studios who started small and made it big thanks to visual novel masterpieces are turning to the mobile market. Nitroplus, the studio behind Saya no Uta, Phantom, and Demonbane, recently announced its 20th-anniversary game: Warau Ars Notoria. And it’s a mobage coming in Spring 2020. Another example is Aquaplus, which launched Utawarerumono Lost Flag on November 26, a mobage for the Utawarerumono franchise. The studios simply cannot afford to ignore the mobile market and are all striving to survive while keeping their identity.

The last visual novel Key did is Summer Pockets, which is available in Japan on mobile, Switch and PC. A fan-translation patch covering half the game’s content is available on PC.

I’m personally still waiting for the sequel episodes of the Angel Beats game to release one day.