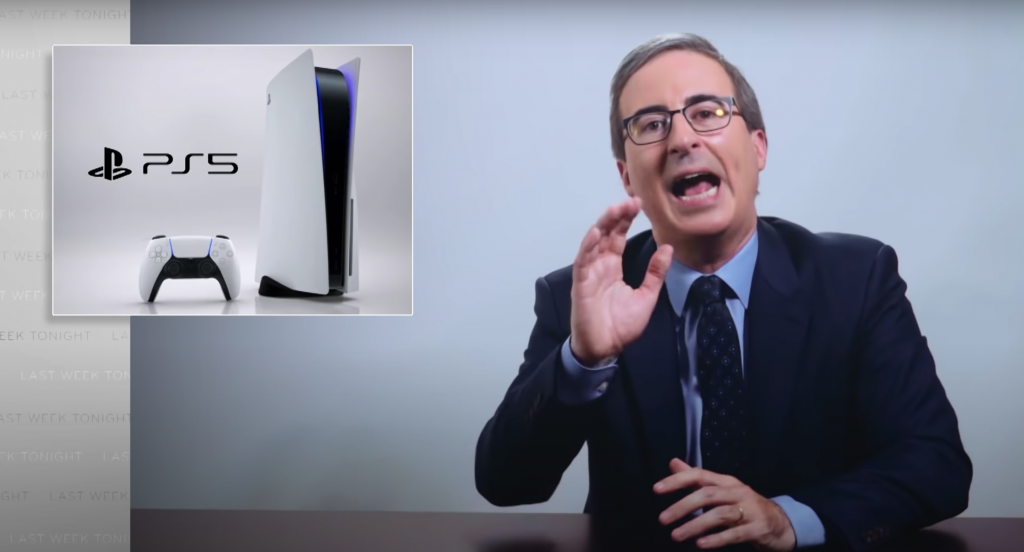 Even though Sony’s PS5 reveal event transpired a few weeks back at this point, many are still brimming with excitement in regards to the next-generation platform. Surprisingly, one popular late-night host is even looking forward to picking up the console for himself, and he’d apparently be willing to go through some dastardly means to get ahold of one.

During last night’s edition of Last Week Tonight with John Oliver, the show’s titular host expressed that he is very much anticipating the PlayStation 5 as well. So much so, in fact, that Oliver said he would trample someone to get his hands on the console one it launches.

“I don’t care that it looks like an alien’s waffle maker or a penguin designed by Apple. It’s going to have Horizon Forbidden West as an exclusive release and I will stomp anyone who stands between me and that game,” Oliver stated. “I want to murder dinosaur robots with flaming arrows, and I want to do it now!”

You can watch the brief clip from last night’s episode right here:

Obviously, the whole bit is a goof on Oliver’s part, at least from what I’m aware of. Maybe he is actually going to be in line on day one to pick up a PlayStation 5 along with everyone else and perhaps his quirky British self will be willing to run over people to get one in the process. You can’t trust folks from the U.K., after all.

Whatever Oliver actually intends to do, I do appreciate that his most-anticipated game for the PS5 is Horizon Forbidden West. While there has been a lot of talk about Marvel’s Spider-Man: Miles Morales, Bugsnax, and Demon’s Souls in the wake of the PlayStation stream earlier this month, I don’t feel like Horizon is getting enough love. That’s a darn shame, too, considering Horizon Zero Dawn was the best release of 2017 and its sequel looks just as great.

While Oliver isn’t the only one who is greatly looking forward to the PS5, we still don’t know some vital details about the platform. As of now, all we know is that it’s set to launch this holiday season at a yet-to-be-determined price.

As for Horizon Forbidden West, Guerrilla Games says it’s currently planning to release the game at some point in 2021. Let’s hope that release window ends up coming true because I too would like to murder robot dinosaurs sooner rather than later.

The post John Oliver is Quite Excited for the PS5 and Horizon Forbidden West by Logan Moore appeared first on DualShockers.