Gorogoa is a puzzle game currently in development by Buried Signal, a studio started by artist Jason Roberts. Although it is expected to release on iOS devices eventually, it will first release on PC this year. While at PAX West 2017, we got a chance to demo the PC version of the game, and it is impressive.

Gorogoa tells its story through gorgeous, hand-drawn and interactive images illustrated by Roberts and organized between four panes. As you select elements within each new image, they transform in some way, sometimes by zooming-in and revealing a new detail of a scene, and sometimes by stirring some object into significance. The game progresses through experimenting with these images, but also by dragging pieces of them into new panes or by fusing together adjacent panes from the same scene for further interactivity.

Soon, you will find all four panes occupied and it’s not long after that when Gorogoa will ask that you begin overlaying them on top of each other. By doing this, the pieces begin to interact (assuming you’ve laid them correctly) and the game will progress. Incorrectly placing panes will simply result in the image rubberbanding back to its own space.

“Situations such as this echo throughout Gorogoa and make it about so much more than a simple fetch quest.”

As for Gorogoa‘s plot, it’s hard to say precisely what’s happening due to its regularly abstract nature. The best that I could gather, you are tasked with using perspective to bend reality and collect a series of different colored orbs for a boy, to what end I’m not certain. While I couldn’t discern the game’s entire plot, it does provide miniature narratives that are unique, insightful, and beautiful.

One such mini-narrative brought me to an inventor’s workshop. As a result of a war being waged outside, the power goes out and he loses his source of light. He can no longer work. In order to help the boy get his next orb, I also had to alter the inventor’s environment and solve his plight. Situations such as this echo throughout Gorogoa and make it about so much more than a simple fetch quest.

Gorogoa‘s gameplay mechanics are pretty simple, but puzzle solutions are rarely so. Each pane’s scene is so often packed with detail that could be relevant to your current task (or a future one) that there seems to be no other way to play than by guess-work. Through almost the entire experience, I found myself rolling my cursor over each element of a scene, waiting for it to turn into a pointing hand that indicated it could change. When I had extinguished all of those possibilities, I began shuffling panes around to see if that would help the game progress. Much of playing Gorogoa is about stumbling into a solution… until it isn’t.

Near the end of my time with Gorogoa, I encountered a rather elaborate puzzle. Instead of the random experimentation that I was used to, I was actually expected to devise a plan and execute it with precision.

“As an occasionally obtuse puzzle game, Gorogoa runs the risk of frustrating some players…”

The puzzle consisted of moving an iron ball from one scene to the next through a series of panes. However, I had to memorize the order and positioning of panes through about four phases in order to keep the ball rolling or else it would simply roll out of view and I’d need to start from the beginning. It was certainly a challenge, but when I figured it out and completed it, I felt rewarded with a strong sense of accomplishment. 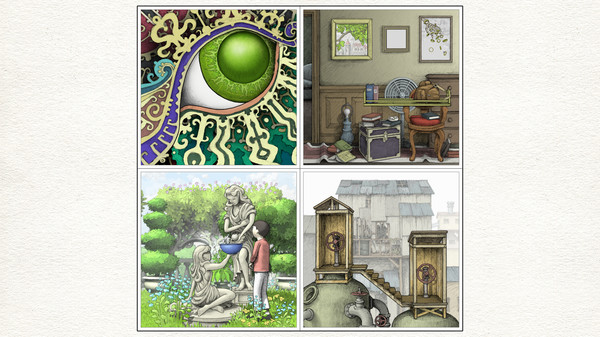 One aspect of Gorogoa that cannot go unmentioned is its art style. The detail and creativity that goes into each of its scenes is masterfully evocative. As an occasionally obtuse puzzle game, Gorogoa runs the risk of frustrating some players, but with its character and such a rich color palette, I couldn’t help but feel calmed by it. And with the captivating music composed by Joel Corelitz (The Unfinished Swan), that effect is compounded.

Gorogoa is a game set up into four little boxes that also requires you to think outside of them. It’s artistic and thematic tones are striking. Although it often feels like a guessing game, its more detailed puzzles will certainly have some scratching their heads and striving for an answer. I don’t think I’ve ever played a game quite like Gorogoa, but I’m ready for more.