Techland Games surprised everyone when it recently announced that its next game would be a fast-paced top-down shooter with heavy inspiration from Hotline Miami. The game, titled God’s Trigger, follows two main characters: Harry, an angelic soldier from Heaven, and Judy, an escaped demon from Hell. Together, they must fight to kill the four Horsemen before the apocalypse can be triggered.

At PAX West 2017, we got to spend a little time with God’s Trigger through a guided demo, and it was one helluva ride.

The first thing that you realize when you sit down with God’s Trigger is that it is very much like Dennaton Games’ Hotline Miami. It’s violent. It’s fast. Much like the gameplay found in the brutal top-down shooter, you must fight through rooms of enemies with pinpoint precision, swapping out weapons as needed, and conserving ammo, all while trying not to get hit by an enemy even once.

The core gameplay will feel very familiar to Hotline Miami veterans, and it’s executed well, but Techland has also made strides to innovate the formula and make its own. For one, you have the option of choosing between two characters to play as, each of whom play slightly differently.

Both characters have the ability to dash, creating opportunities to break through obstacles and ambush enemies or to simply dodge incoming danger, but they also come equipped with abilities that set them apart from one another. For starters, Harry wields a base sword melee weapon and Judy wields a base chain melee weapon. However, as you eliminate foes, you will also gain experience and slowly power-up a special ability unique to each character.

“I found that the two actually complemented each other nicely…”

For my playthrough, Harry was equipped with a protective shield ability and Judy had a vortex ability that would slow or pull enemies into a particular area. I found that the two actually complemented each other nicely, one being more defensive and the other more offensive. My understanding was that those abilities could be changed out for others amongst an unlockable skill tree, so even further customization and synergy might be possible down the line of progression.

As may be apparent by this point, the game is decidedly cooperative. The aforementioned Harry and Judy are a duo that are meant to be played between two players, side-by-side simultaneously.

Throughout my demo experience, myself and my partner would approach a new room and discuss a plan of attack, designating who would strike where and when. It eventually became customary for the two of us to actually countdown so we could synchronize our approach for maximum effect. 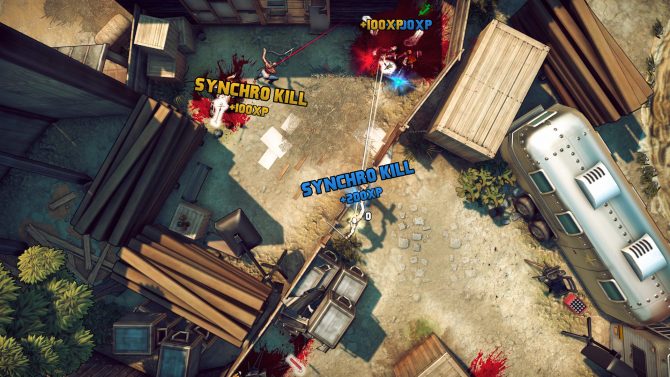 Apart from the fun that comes with playing God’s Trigger with someone else, it also feels a little more fair this way. While the game can be played as a single-player experience, and the game makes some concessions for that experience to work, there are certain aspects that are by default absent. For example, when playing cooperatively, a surviving player can revive one that may have fallen. It may seem minor, but in a game that moves as quickly as God’s Trigger, you want that safety net and you’ll almost certainly be using it regularly.

“…firefights move fast and offer a quick adrenaline spike even when it’s your own juices spread along the floor.”

By the end of my demo, I couldn’t help from feeling that God’s Trigger almost shouldn’t have a single-player experience at all. Of course, I understand that some people simply want to play their games alone, but Techland has done so much to make both Harry and Judy feel necessary in the game and to feel almost inseparable from each other. It would be a shame to play with only one of them at a time.

It should be said that I died a lot in my time with God’s Trigger, but I never felt extensively punished for it. The time between fights can be a calm and strategic moment between teammates, but firefights move fast and offer a quick adrenaline spike even when it’s your own juices spread along the floor. When both myself and my partner perished, the checkpoint system felt rather forgiving, and we rarely had to go through many waves to reach where we left off.

God’s Trigger is an intriguing spin on Dennaton Games’ masterpiece. It’s quick, brutal, and almost certainly meant to be played cooperatively. Although only some details of the story and progression system were mentioned to me during the demo, I feel confident that there’s much yet to be revealed, and I’ve been left eager to see and play more.