If you still haven’t heard of Genshin Impact, it’s a free-to-play, open-world action RPG coming to PS4, PC, and Mobile on September 28. The game features a full single player experience, but can also be experienced via online coop. The monetization works through a gacha system to get new characters, and it works pretty well. Genshin Impact is one of the most promising releases of 2020.

The official Twitter account for Genshin Impact specified PS4 players will not be able to transfer their account to PC or Mobile. Simultaneously, if you’re playing on PC or Mobile, you can play on the same account on either platforms, but not on PS4. You’ll have to make a new account.

Note that everyone will be able to play online coop together. Regardless of their platform.

Technically, we pretty much already knew. As in the latest Closed Beta and first one including PS4 players, you couldn’t use the same account on PS4 and other platforms. For now it’s unknown how things will go for the Nintendo Switch version of Genshin Impact, planned sometime in the future. Personally speaking, Nintendo feels more lenient compared to Sony when it comes to cross-play accounts, so I’m assuming it will be possible to play on Switch with the same account as PC and Mobile. We’ll tell you as soon as we know more on the matter.

What kind of gift would I like? Huh, maybe something that I could sell to cover the cost of— Uh… forget I said that!

Thank you for the gift… I’ll open it when I get home…#GenshinImpact #Mona #Happybirthday pic.twitter.com/pX3PcHtKCK 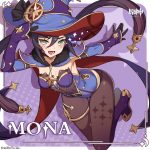 The official Twitter account for Genshin Impact celebrated on August 31 the birthday of Mona, a new character just recently revealed with new gameplay. A Photo Mode was revealed too. Check it out here. You should also take a look at the N0va Dekstop project and Vtuber YoYo Lumi.

You can preregister for Genshin Impact on miHoYo’s site. Over two million players have preregistered so far:

The post Genshin Impact PS4 Accounts Won’t Be Transferable to PC or Mobile by Iyane Agossah appeared first on DualShockers.