For nearly a decade, out of all the sports games published by Electronic Arts, the FIFA series has been the most consistent in quality, while the consensus for sports games as a genre tends to be that they suffer by failing to make massive changes from their predecessor. However, I am happy to say that FIFA 18 is one of the most innovative sports games I have played in the last ten years.

Much like Madden 18, FIFA 18 has gone above and beyond to provide a new experience on how we play soccer by redefining the franchise from scratch and adding new features that I felt should have been introduced years earlier. On top of that, those who have strayed away from the series for a while should be happy to know that this entry has an abundance of new content that will attract you to pick up a copy as soon as possible.

Gameplay in FIFA 18 is more precise than it has ever been; whether I am passing the ball from player-to-player or attempting to make a goal, the reaction time between the controller and the action itself is spot-on and amazingly accurate. Unlike in previous entries where the ball felt a bit too flimsy for my liking, this year’s installment has added a bit more realism into how much weight a soccer ball should be; in other words, I did not have to worry about overpowering my passes.

The occasional collision and players stumbling during the game make it feel as if I am not even playing sometimes but instead watching an actual soccer match. The player movements, meanwhile, felt immersive (whether they were on or off the ball) and I never had a moment where controls felt too over the top.

Visually while the game is decent, with over 80 stadiums, each location was distinct, and nothing seemed duplicated. It was pretty cool to check out each stadium and see what made it stand out from the others. The commentary in FIFA 18 also adds to the mix, which provides accurate overview on what’s going on in the game, with some play-by-play sidenotes along with making their own subjective comments adds to the fact that it’s like watching a soccer game all that much more believable.

Aside from that, unfortunately I can’t say the same for the graphics overall regarding a the jump from FIFA 17; by using the same engine from last year, the models of the NPCs look very similar in comparison. The  players’ faces felt way too generic, especially when you do a side-by-side comparison of the character models from its genre competitors, Pro Evolution Soccer, Madden 18, and NBA Live 18. 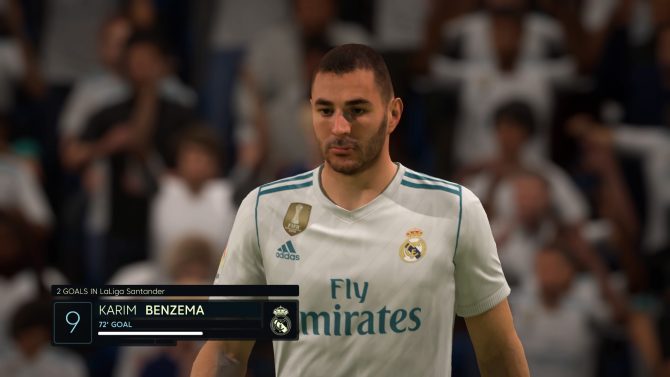 He just scored a crucial goal, I would expect a lot more excitement to be honest.

Speaking of the character models, I am baffled by the fact that the animations are so bland. If it is a close match and I score a crucial goal I would expect the players to be happy, but any in-game celebration felt incredibly dull to me, which takes away from the fact that I won the game. It’s not a major criticism of the game, but it holds FIFA 18 from the photo-realistic goal it seems to be aiming for. Nevertheless, for a game released in late 2017, the facial animations outside of cutscenes are unacceptable by today’s standards.

Many AAA sports titles today tend to focus more on developing the multiplayer aspects of the a game — so much so that the single-player mode sometimes feels like an afterthought. Nothing can be less true in FIFA 18.

Aside from the flaws of the player models, the crown of FIFA 18 is the single-player campaign: The Journey: Hunter Returns. Players control Alex Hunter, returning soccer-star protagonist, and his journey across the globe. Little does he know that this will be his biggest season he’s ever endured. The story kept me motivated to play more — the fact that FIFA 18 features an ensemble cast of voice actors (including cover athlete Cristiano Ronaldo and NBA Live 18 cover athlete James Harden) means the campaign easily smokes FIFA 17’s in the water. 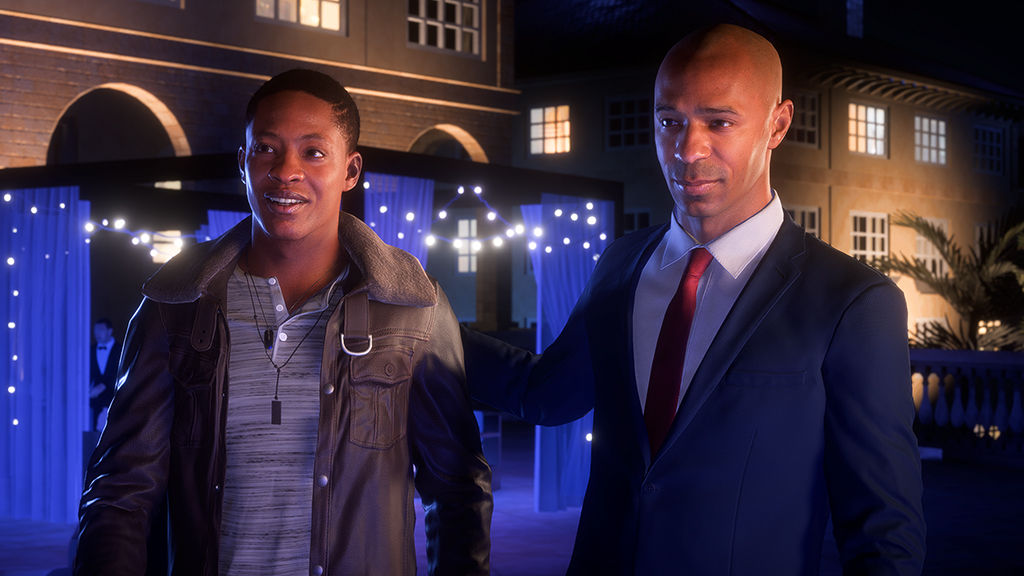 On top of that, there was a standout moment early on in the story where you are in Brazil playing a 3v3 match; it certainly felt like an ode to the FIFA Street series, and it certainly was a bit of service to fans of that franchise as well. Perhaps EA might be hinting at a FIFA Street comeback? Only time will tell.

The production value for The Journey: Hunter Returns is so high, whenever I am playing sports games I tend to play more of the single-player content instead of multiplayer. The Journey Hunter Returns had a compelling story, fantastic voice acting and likable characters that helped drive the narrative and kept me coming back for more.

Yet the lack of customization cripples FIFA 18 as well; creating your player is limited, which makes it hard for your player to stand out from anyone else’s, including the NPC’s. It doesn’t help the fact that I cannot create my club team in a quick game of pickup or even a franchise mode, where you can manage your team. Hopefully, in the future, EA Sports will bring back creating your team feature, because that component is too good to be forgotten. 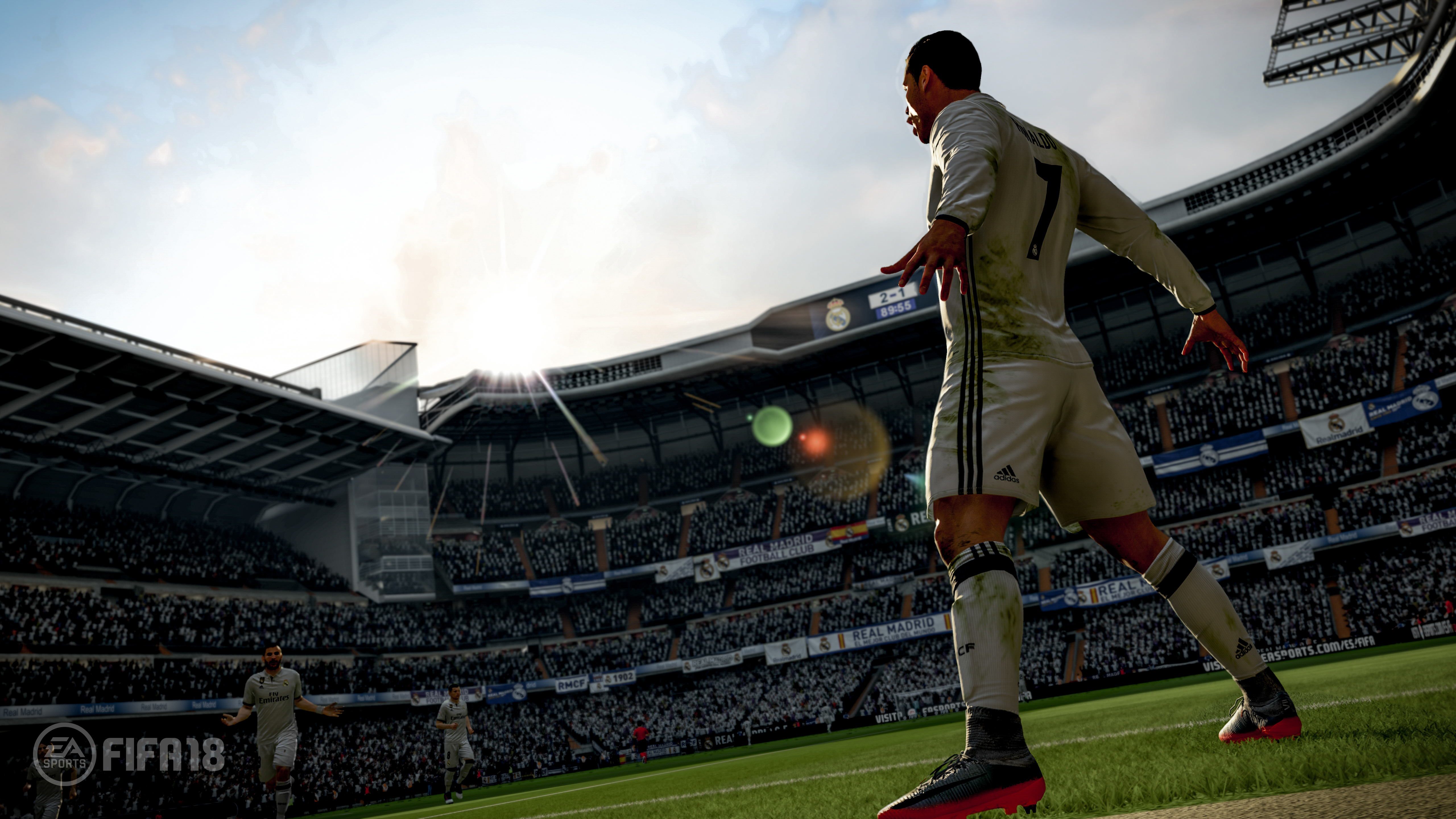 The closest thing to customization (or lack thereof) is FIFA Ultimate Team; you create your organization — basically, you are choosing uniforms as well as the crest your team will bare as well as how to manage your starting lineup and your roster. FIFA Ultimate Team offers a leveling-up system allowing to improve your team’s overall rating, which will allow you to win more games.

One of the more notable tweaks to Career Mode is the new mechanics for transfer market and contract negotiations. Transfer dealings are conducted in real-time via dialogue options similar to the dialogue options featured in The Journey: Hunter Returns.

If you’re not playing a game with someone who has a pulse (like me a majority of the time) I am happy to say that the CPU’s offer some fight in them. While it is not unfairly difficult, nor is it playing with a group of dummies, it provides a nice amount of challenge. While I can admit I am not a pro-FIFA player, not once did I ever find playing the computer too frustrating.

“Whether you have been on a FIFA hiatus or you are a long-time veteran, you should come back to this series — if only for the single-player content.”

The biggest complaint I have with many eighth generation games is that I feel a vast majority of them do not offer any challenge. Video games by no means are designed to let you win automatically, and I love that that this title allows me to earn my win by being strategic and smart instead of throwing it away so I can become the de facto winner. Even playing with a friend or family, member the NPCs are still hard at work during off-ball play, trying to assist both sides to the best of their ability.

FIFA 18 is by no means a perfect game, the lack of customization and emotionless animations from players puts the game back a few steps, but this is not a bad game. Whether you have been on a FIFA hiatus or you are a long-time veteran, you should come back to this series — if only for the single-player content.