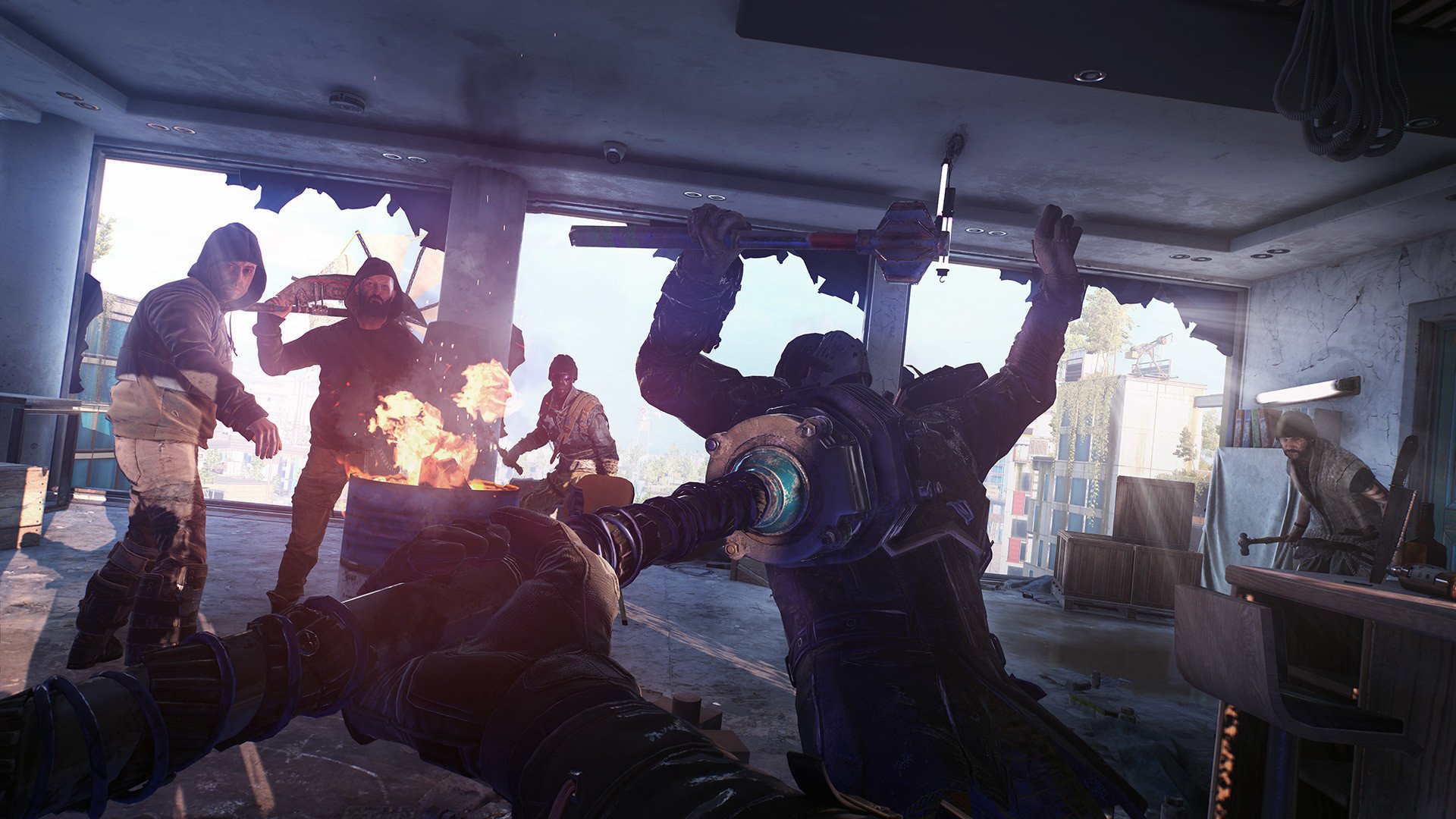 Despite a handful of delays, Dying Light 2‘s release date is finally closing in and it’s shaping up to kick off 2022 in style.

Ahead of the game’s launch, I was lucky enough to chat with Bartosz “Glova” Kulon, the mastermind and lead programmer behind Dying Light 2’s combat and parkour mechanics. Here’s what he had to say:

Dying Light felt revolutionary with its combination of Parkour and inventive monster-killing abilities – how have you built on this to ensure Dying Light 2 has that same wow factor?

Bartosz “Glova” Kulon: Our approach to it was – make combat and parkour as much integrated together and with the world as possible. We analyzed every move from combat, and every move from parkour and thought of how we can use them in the other. In example, vaulting over a low obstacle is something that happens a lot. We added a kick to that so the player can kick enemies when vaulting, but then in combat if the enemy is hit really hard he can bend and the player can vault over him and use it to kick the enemy behind him. Sounds complicated, but we made it simple and satisfying.

In combat players can run and use enemies to jump in the air and can either use that to perform a strong attack or to run away from danger. We tried to create as open ended situations as possible and give the player the freedom to mix the moves and solution. This sandbox approach is something that we believe was the goal of success in the first game, and will be as well for Dying Light 2.

What was the process for designing and building a whole city specifically for the parkour movement Dying Light 2 is going to focus on? How difficult was it?

Bartosz: From the scratch we knew that the city needs to be built with player and ai abilities in mind. That’s why tide collaboration with our LD team was crucial. We experimented with distances and objects that can help you maneuver between buildings and levels of The City. What is great, is the advantage you can gain thanks to the environment, the high and wide of buildings or different surfaces to wall-run on.

The City was also built with combat in mind.

The City was also built with combat in mind. From this side we also wanted the environment to support the mobility that the player has – so he can use walls, poles, ledges – everything to the player’s advantage. And he can use this advantage to become a powerful tool himself, using the gravity or momentum force to knock down the enemy.

What is your favourite new weapon, mod, mechanic or move that’s been built into Dying Light 2?

Bartosz: Like I mentioned earlier  – the best weapon is your creativity. When you have as much time spent in the game as I have (over 12k hours), you start to be more curious than using just a single weapon, move or mechanic. You start experiments and that is where the fun part starts.

the best weapon is your creativity.

The best part is when you actually mix them together. So doing a combination of everything is something that really is my favorite thing. You can run away from an enemy and jump over a window and mid air, turn back, grab the window, pull up and kick the chasing unit in the face – it’s really satisfying. Or when hitting an enemy with a powerful weapon you can use him as a springboard jump, on a wall, do a wall run, turn around and jump back with a powerful kick on the poor guy. That kind of thing is something that I’m really excited to put in players’ hands and see how creative they can become.

Will the faction’s assigning system be tied into unlocking certain upgrades?

Bartosz: Yes it will be used to shape The City to your liking. With choices that you make the factions will build helpers that will aid you in movement in The City or help you with combat encounters. The more you play in the game, the different world You will have. You will also be able to observe those differences while playing co-op, so it’s always worth checking how your friend shaped his world by joining his session.

How have you and the studio adapted over the past 18 months during the pandemic? Were there any major changes that have had to be made as a result of it?

Bartosz: Major changes are a vast understatement. The development changed completely. From a technical point of view we adopted really fast, our Administration and IT was super agile and supportive, so I think we moved to remote work in 2 days. Everything worked efficiently from the beginning.

As the work progressed though, we started to see that not being able to go into meetings and talk face to face is something that is slowing us down. But we adapted really fast and worked out new communication styles, so nowadays we got used to remote work and I think that everything is on the right track. But having that kind of turbulence when developing the game didn’t help with finishing the job faster, that’s for sure!

The original game has been out for close to seven years by this point and is still receiving support in the form of events and DLC – is this level of support planned for Dying Light 2?

Bartosz: So I’m not a person to ask. But knowing our company values it can’t be different this time. Especially that we now know how to do it properly and we have big experience in it. Even now as we speak DL1 has over 0.5 mln unique players monthly. We really do believe that the support matters. Our goal and ambition is to always listen to our community, learn about their preferences and together with them implement that in the game.

The post Dying Light 2 Interview – “The Best Weapon is Your Creativity” by Sam Woods appeared first on DualShockers.