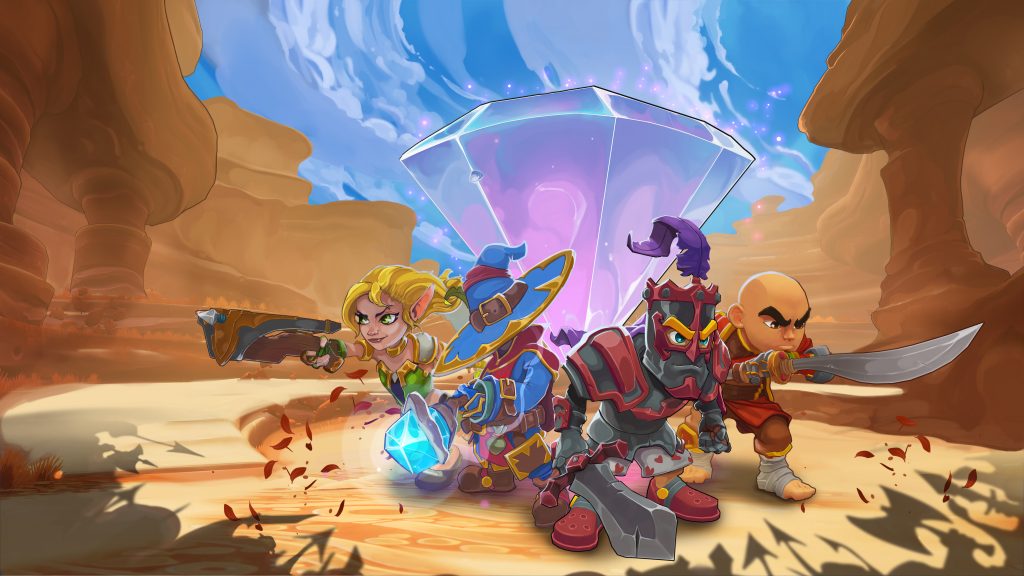 After growing up in Dungeon Defenders II, our heroes have been sent back in time to defend the realm all over again, or something like that. Let’s be honest, nobody is playing Dungeon Defenders for the story, and honestly, the story that’s here feels like it’s just meant to justify the remaster. Regardless, our heroes are children again; the apprentice, huntress, monk, and squire are back and look better than ever. In fact, everything looks better. Longtime Dungeon Defenders players will certainly feel nostalgic while fighting waves of goblins and wyverns at the visually updated Deeper Well, Alchemical Labs, or even The Summit.

The gameplay is where Awakened shines; playing through all the visually updated Dungeon Defenders maps feels amazing, and Dungeon Defenders II’s hero deck system is a huge part of that. For players who never got into Dungeon Defenders II, the hero deck allows you to train four different characters simultaneously, and switch heroes between waves. This eliminates a big issue from the original Dungeon Defenders game where certain heroes were not viable on harder difficulty settings and challenging maps, and the game became too challenging to complete in single-player. The hero deck adequately combats this issue, allowing you to utilize the apprentice’s best towers, the squire’s blockade, and the monk’s most powerful auras all at once, while using the huntress for hero DPS.

Awakened also improves hero combat. In the original Dungeon Defenders, you used your mana to cast abilities, build defenses, and heal yourself. Awakened has both a regenerating mana bar and crystals that you pick up from defeating enemies. The mana bar can be used to heal yourself or cast hero abilities. Meanwhile, crystals collected from enemies and completing waves is used to build, upgrade, and repair defenses. I love this change because healing and casting abilities no longer feel like a waste of mana. After all, dying does nothing besides sending you to a three-second respawn screen (unless you’re on hardcore mode), so healing really shouldn’t be punished.

Awakened has also added a good amount of movement and strategy to the Dungeon Defenders combat. In previous games, heroes needed to be grounded and stationary in order to heal. In Awakened you can heal as long as you aren’t making any directional inputs. This means you can heal while in the air, using your momentum from jumps to carry yourself to safety. This same strategy can be applied to upgrading and repairing defenses, allowing you to traverse the map and improve your defenses quickly, while in combat. 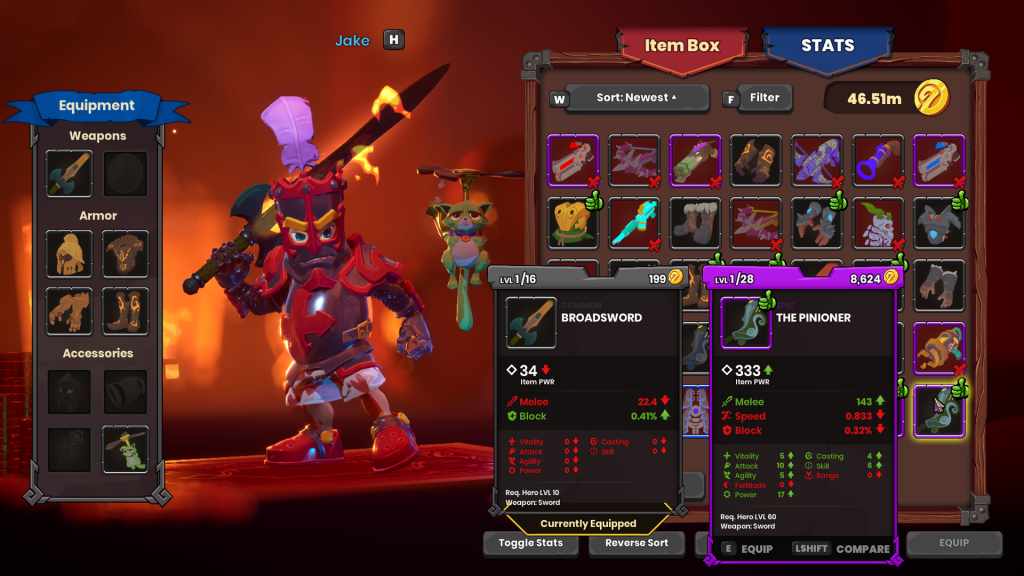 Your hero gameplay, combined with the classic Dungeon Defenders tower-building, makes for the basis of the game’s 15 campaign stages. However, Awakened has more content to offer. Survival mode puts you up against 25 waves of challenging enemies, and mix mode is even harder, combining the survival formula with random enemy spawns that are sure to throw more wyverns, dark mages, and kobolds at you. Meanwhile, pure strategy mode renders your hero powerless, forcing you to defend your Eternia crystals with only your conjured defenses. Lastly, challenge mode has nine levels, which each have their own gimmick, from teleporting Eternia crystals, to enemies falling from the sky. Of course, any of these modes can be played on the game’s six difficulties, which includes the all-new massacre difficulty.

Your reward for completing these various levels and challenges is up for interpretation. Is it the trophies that decorate your tavern? The items you earn? Or the new difficulties and levels you unlock? I’d argue that your real reward is the experience your heroes gain. The stronger you become, the more fun Dungeon Defenders Awakened becomes. Once your towers are firing across the entire map at lightning-quick speeds and one-shotting enemies, Awakened is an absolute blast to play. However, when you’re first starting out Awakened can be pretty boring. 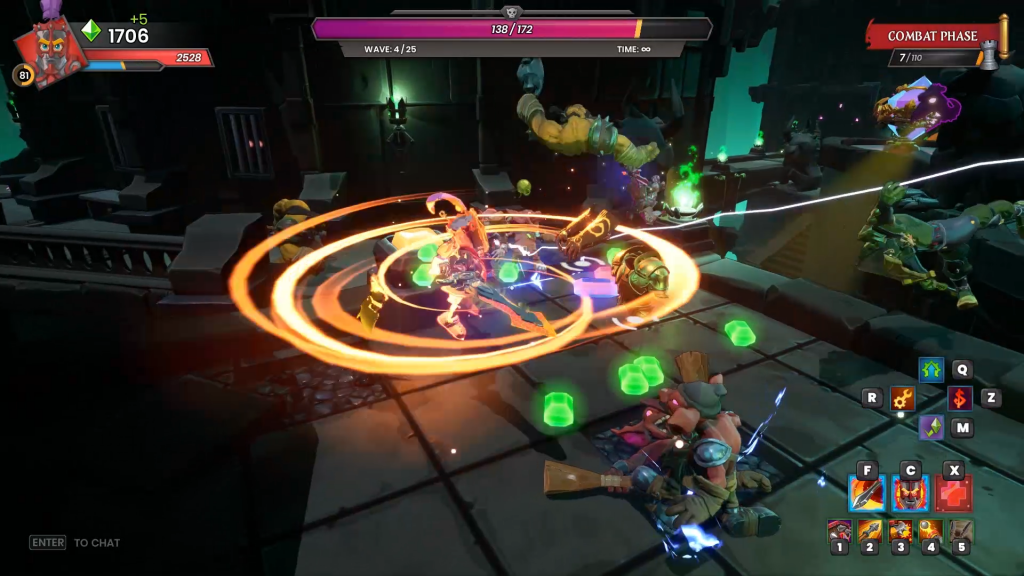 “Once your towers are firing across the entire map at lightning-quick speeds and one-shotting enemies, Awakened is an absolute blast to play.”

Right from the start, I noticed that the easy and medium difficulties are pretty laughable. I would recommend starting out on hard, even if it’s your first Dungeon Defenders game. The only challenge will come from the boss levels, but the increased experience that you earn will be well worth it. Awakened’s boss battles are one of my biggest issues with the game. The boss battles feel wildly out of place and are a massive difficulty spike regardless of the difficulty you choose. Instead of bosses spawning in lanes and getting attacked by your defenses, they usually spawn where only your hero can hit them. Additionally, they’ll likely one-shot you unless you’ve been heavily investing in hero health. The bosses aren’t too difficult when you’re at or above the recommended hero level for the stage, but that just makes Awakened even more grindy.

After breezing through the campaign’s second act on insane difficulty with no issues, it was upsetting when the boss literally pushed my defenses aside exposing my crystals and forced me to restart multiple times. Even more upsetting was the fact that the three levels immediately following the boss were an absolute cake-walk until I got to the next boss. Despite getting through insane difficulty beating all 12 of the non-boss levels on my first try, it felt pretty silly for the game to tell me I wasn’t ready for the boss battles.

Another downside to challenging higher-difficulties at first is that item drops scale to the level’s difficulty, rather than your hero’s level, meaning that you won’t be able to equip many of the items you find. Of course, you can always pick up these items and save them for later, or sell them for gold; but unlike the original Dungeon Defenders, gold currently has no use aside from upgrading items. Additionally, it takes so much gold to upgrade items, that saving all your gold for higher-level gear is almost always the correct play. I really wish there was a store in the tavern where you could purchase items scaled to your hero level, similar to the store in the original game. I assume Chromatic will be adding a shop in the future, but as of now, the tavern feels pretty lifeless with its only occupants being two NPCs that do nothing besides throw up text boxes. 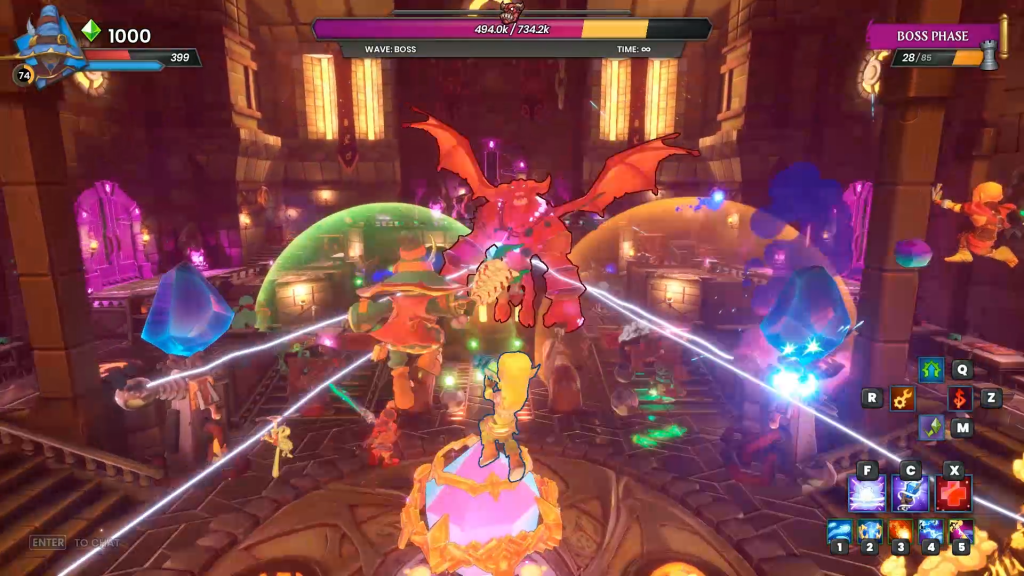 Dungeon Defenders: Awakened is an obvious work-in-progress, making it hard to place. It features the best graphics, and combat that the series has ever seen, and when you’re well-equipped or playing with friends, it’s a blast. However, there are glaring issues. Gold feels worthless, there is no chest or bank to store your items, it’s missing many different hero classes that previous Dungeon Defenders games had, and current controller support is lackluster. Aside from missing features, boss battles feel out of place and come with crazy difficulty spikes. However, there is nothing else like Dungeon Defenders: Awakened out right now and it scratches an itch that other games aren’t reaching.

Ultimately, Dungeon Defenders: Awakened is a very unique experience that will only improve with time if Chromatic listens to their players and updates regularly. The early game can be boring, especially when played alone. However, co-op is exciting at any time, and the late game is an absolute blast. In nightmare mode, stages begin to reach the perfect level of balance between challenge and fun. It isn’t for everyone, but if you’ve been craving some tower-defense, or loved previous Dungeon Defenders games, you’re sure to enjoy Awakened.