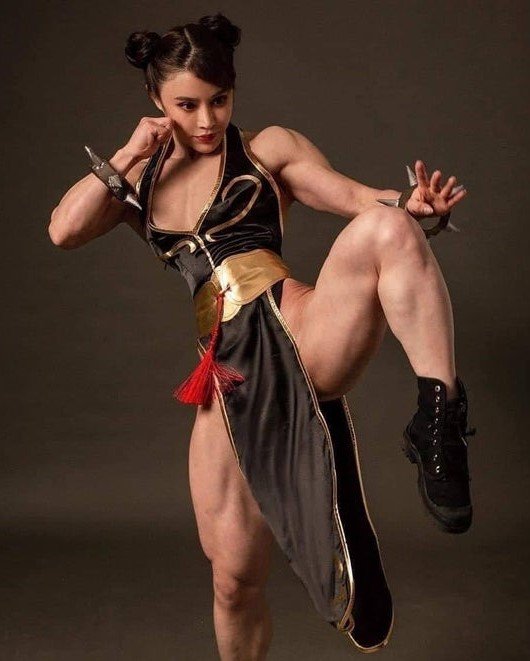 Street Fighter is one of Capcom’s most beloved fighting games, making the rounds since 1987. Inspired by the manga Karate baka ichidai, the title is one of the highest-grossing video game franchises of all time and serves as one of Capcom’s flagship series with total sales of 46 million units worldwide as of December last year.

Bodybuilder Herong, 32, has taken the internet by storm with her perfectly played Chun-Li cosplay that showcases the doctor’s well toned muscles. Having always had a love for martial arts especially Chinese Kung Fu, Street Fighter V‘s “strongest woman in the world” is certainly not a far stretch for Yuan.

Wearing what looks to be an alternate outfit consisting of a black sleeveless evening gown with gold accents at the bottom that’s had some adjustments made to it for those high kicks as well as Chun-Li’s trademark hairstyle coupled with those spiked metal bracelets, Yuan Herong’s cosplay is as near perfection as you can get.

In an interview with the Daily Mail, Herong spoke about her routine and finding time to juggle her work life as well as getting her body in shape for competetions “Because I am a traditional Chinese medicine practitioner, I don’t need to work shifts. Therefore I get to go to the gym at 5:30pm when I finish work. I go there four to five times a week no matter it rains or not.”

To check out more of Yuan’s bodybuilding, she is pretty active over on Instagram where you can take a look at what it takes to look as good as she does.