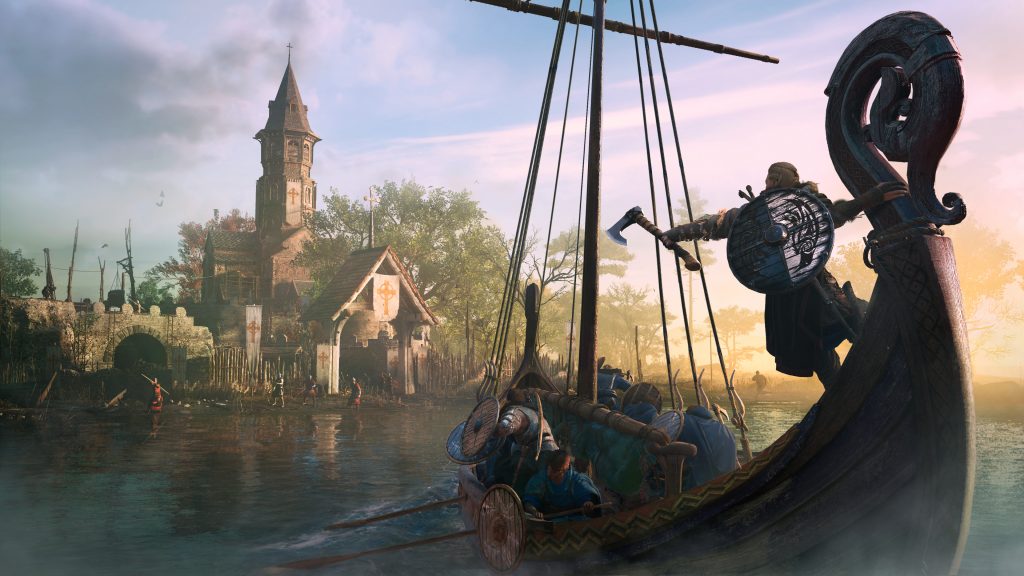 I’ve honestly been struggling to determine my thoughts on Assassin’s Creed Valhalla after having played a little over three hours of the game about a week ago. In its simplest form, Valhalla is very much akin to the two Assassin’s Creed installments that have come before it; Origins and Odyssey. As such, this format for AC has started to feel a bit less fresh than it did before which–albeit not a bad thing–means it’s getting harder to determine what the biggest differences are that Valhalla will bring with it this time around.

Based on my own playtime, Ubisoft is definitely taking elements of what Odyssey and Origins introduced and is simply refining them here with Valhalla. While I’m still uncertain of what the final result will be like, this brief demo did at least get me more intimately familiar with some of the core mechanical differences that are being implemented in this Viking adventure.

“Ubisoft is definitely taking elements of what Odyssey and Origins introduced and is simply refining them here with Valhalla.”

Far and away, the biggest updates to Valhalla this time around seem to be happening in regard to combat. Despite having the same general structure–with the special abilities from Odyssey making a return–the biggest advent to Valhalla is a stamina meter. That’s right, Assassin’s Creed is seeing another injection of mechanics that were largely popularized in the Souls series, and while this move might sound like a trite one at first, it actually makes combat encounters vastly more engaging.

Being limited in how often you can hack and swing your axe (and other weapons) about, in addition to having to be more cognizant of when you can dodge roll to safety, changes things dramatically. While I wouldn’t say Valhalla is on the same level as Dark Souls in terms of difficulty, even basic combat encounters do bring a challenge to the game that I wasn’t expecting. There were certain portions of my demo that kicked my butt repeatedly and took me multiple attempts to finally clear.

The Soulslike-popularized mechanics don’t necessarily end there, however. Valhalla also brings in a health system that relies on regeneration in a similar format compared to what Estus Flasks provide in Dark Souls. Essentially, Eivor can heal himself at any point in the game, but only if he has enough uses of his healing item (which is just called food) on him. Food can then be recharged by collecting certain materials around the game’s world such as various veggies, herbs, and berries. It’s a straightforward system, but one that you definitely need to keep an eye on. If you’re low on food, you may want to avoid taking on that certain boss fight you found in the wild. 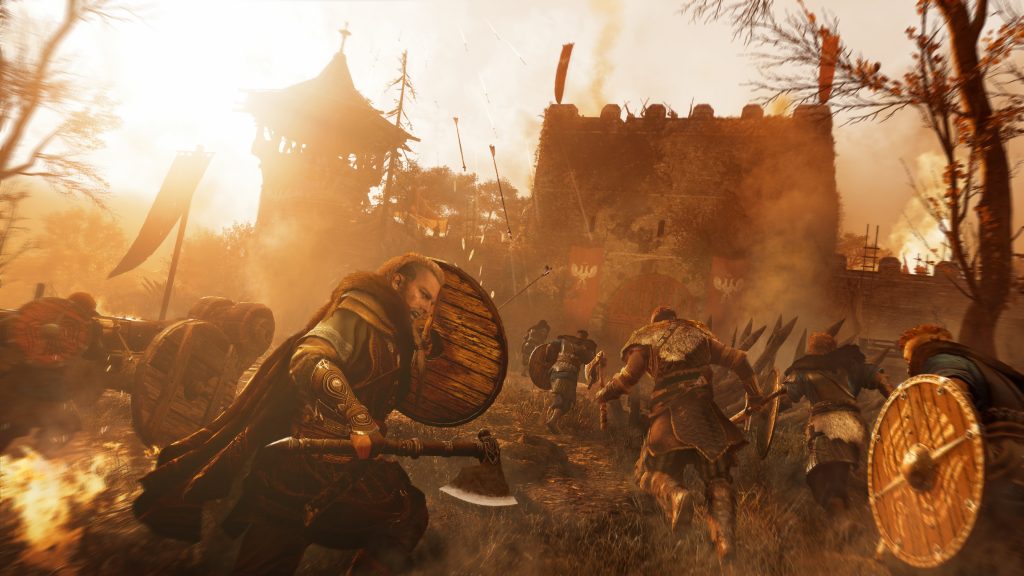 “Assassin’s Creed is seeing another injection of mechanics that were largely popularized in the Souls series.”

Being a bit more limited in how you can approach direct combat due to the stamina meter forces you to try to utilize stealth a bit more in Assassin’s Creed Valhalla as a result. One of the prominent concerns of the Assassin’s Creed series in recent years has been that the stealth roots of the franchise have all but been abandoned at this point, mainly due to the fact that you can’t even one-shot some enemies in previous games when getting the drop on them. Well, the hidden blade is back in Valhalla, and it’s definitely more effective compared to what we saw in Odyssey. I’m not sure if every enemy in Valhalla can be one-hit killed with the blade, but every grunt level enemy that I found in my demo died right away. All in all, if you wanted stealth to be more central this time, it seems like Ubisoft has heard your concerns.

As for what you’ll be spending your hours doing in Assassin’s Creed Valhalla, there seems to be a fair amount of variety. This game is unsurprisingly gargantuan, although I do not think it looks to be as big as Odyssey by any means. Valhalla‘s map of England is cut into distinct sections, each of which contains a number of treasures to find, secrets to uncover, and events to partake in.

In around the two hours or so of my own time with Valhalla in which I actively ran around the world, I took on a legendary beast, led a raid on a local outpost, and beat down a Norse god-like being of some sort. I also at one point stumbled across an Animus point of interest at which point Layla, the real-world protagonist who has appeared in Origins and Odyssey, became my playable character and I navigated through a parkour maze. Despite the fact that I haven’t really been engrossed by Layla’s arc in the previous two games, I’m curious to see how she slots in here, especially after how Odyssey wrapped up. 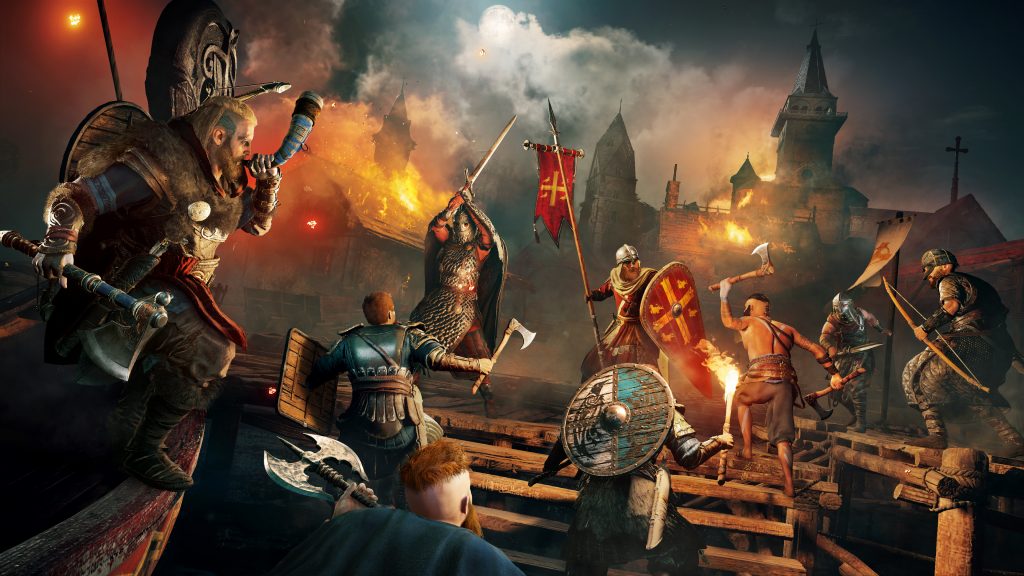 “Valhalla‘s map of England is cut into distinct sections, each of which contains a number of treasures to find, secrets to uncover, and events to partake in.”

On the story and character front, there’s honestly not a lot I can definitively say just yet about Assassin’s Creed Valhalla judging by what I’ve seen so far. My demo took place at somewhat of a random point in the middle of the game where Eivor, the main protagonist this time around, finds himself (or herself) and their companions primarily looking to rescue a friend from enemy clutches. Eivor specifically I’m still unsure of as a character thus far, as he seems a bit more buttoned-up compared to recent protagonists like Bayek, Alexios, and Kassandra. There were definitely some moments of levity in my preview, especially during a few sequences that transpired at a wedding, but my early impressions indicate that Eivor lacks the charisma that Assassin’s Creed characters have had in spades in recent years.

I also, unfortunately, didn’t get to play around too much with the RPG systems, of which there do seem to have been some pretty major adjustments. The way that you utilize skill points this time around sees them slotting into a wide-ranging tree that upgrades Eivor in three distinct areas. These avenues that you choose to upgrade then seem to feed back into Eivor’s overall power level, which is kind of intriguing. Sadly, the demo I played pretty much had Eivor locked in at a specific build, so I really couldn’t tinker around to see how upgrading any of these distinct areas could benefit you in a certain manner.

If you have at all enjoyed the new direction of Assassin’s Creed since Origins essentially rebooted the series back in 2017, then you’re almost surely going to dig what is happening here with Valhalla. Even though I wish that my own time with the game would have allowed me to more thoroughly see all of the new aspects (especially those dang Viking rap battles) that it’s bringing to the table, Valhalla remains one of my most-anticipated titles for the remainder of the year and my hopes for it are high.

Assassin’s Creed Valhalla is set to release later in 2020 on PS4, Xbox One, PC, and Stadia. It will also be coming to both next-gen platforms in the PS5 and Xbox Series X, too.

The post Assassin’s Creed Valhalla Makes its Biggest Alterations in the Area of Combat by Logan Moore appeared first on DualShockers.

Sword and Shield’s Pokemon Reimagined as Pixel Art Will Fuel Nostalgia
Apex Legends May Be Dropping in on Nintendo Switch Next Month
Dead by Daylight Colorblind Support Confirmed After a Developer Say’s They’re Bored of Players Asking for Accessibility Support
FIFA 21 — How to Complete the Paulo Dybala Player SBC
Story of Seasons: Pioneers of Olive Town DLC Details Returning Favorites