Alice Soft, the studio mainly known outside Japan for its Eroge series like Rance and Evenicle, made multiple announcements these past weeks.

First off, if you clicked on this article in the first place, you probably already know the studio is currently developing Choukou Taisen Escalation Heroines. It’s a browser gacha game based on the Choukou (Beat) series, with characters from Choukou Tenshi Escalayer (Beat Angel Escalayer), Choukou Sennin Haruka (Beat Blades Haruka), and Choukou Shinki Ixseal (Beat Valkyrie Ixseal). Characters from other games will be included too.

(Note that some of the following links could be NSFW) 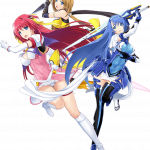 Choukou Taisen Escalation Heroines was first announced in April 2019, and was supposed to launch on DMM in early 2020, but Alice Soft said one year later in April 2020 that it’s now only coming in “2020”. The studio also confirmed then that 90% of the staff is working from home due to the Covid-19 pandemic. 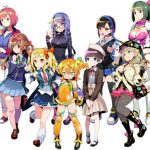 Another game Alice Soft is currently working on is a gang-themed Eroge RPG titled DoHna DoHna Isshou ni Warui Koto wo Shiyou. Regardless if you’re into the Ero part of Eroge, or if you’re the type who skips and avoids the explicit sex scenes, Dohna Dohna looks incredibly appealing. Thanks to its solid looking PRG mechanics, which Alice Soft is renowned for, and the incredibly cool 2D animation. In January 2020, Alice Soft said DoHna DoHna would be launching this year on PC.

However, with the pandemic, you could think the game could be delayed.

“Hello, this is Dark Alice. My pet Ronkichi is sleeping in the next room. It’s time for another ‘out of context’ screenshot from our upcoming game.” pic.twitter.com/Zm5smntUHO

The account purposefully ignore games not announced outside Japan though, and focuses on the promotion of Evenicle 2. The game is already out in Japan, and will get an English demo on Steam titled Evenicle 2 Clinical Trial Edition, launching August 17. The demo covers Chapter 1, which is multiple hours long. Saves from the demo will be transferable to the final game.

Now what’s interesting is how Evenicle 2 will be internally localized by Alice Soft. Without the usual companies usually involved in the localization of this niche, such as MangaGamer or Sekai Project. If you’re aware of the inner workings of the visual novel and Eroge localization scene, I’m sure you can agree for multiple, logical reasons, that Alice Soft localizing and releasing its own games in English sounds like a great thing.

MangaGamer will still handle the localization of the Rance series.