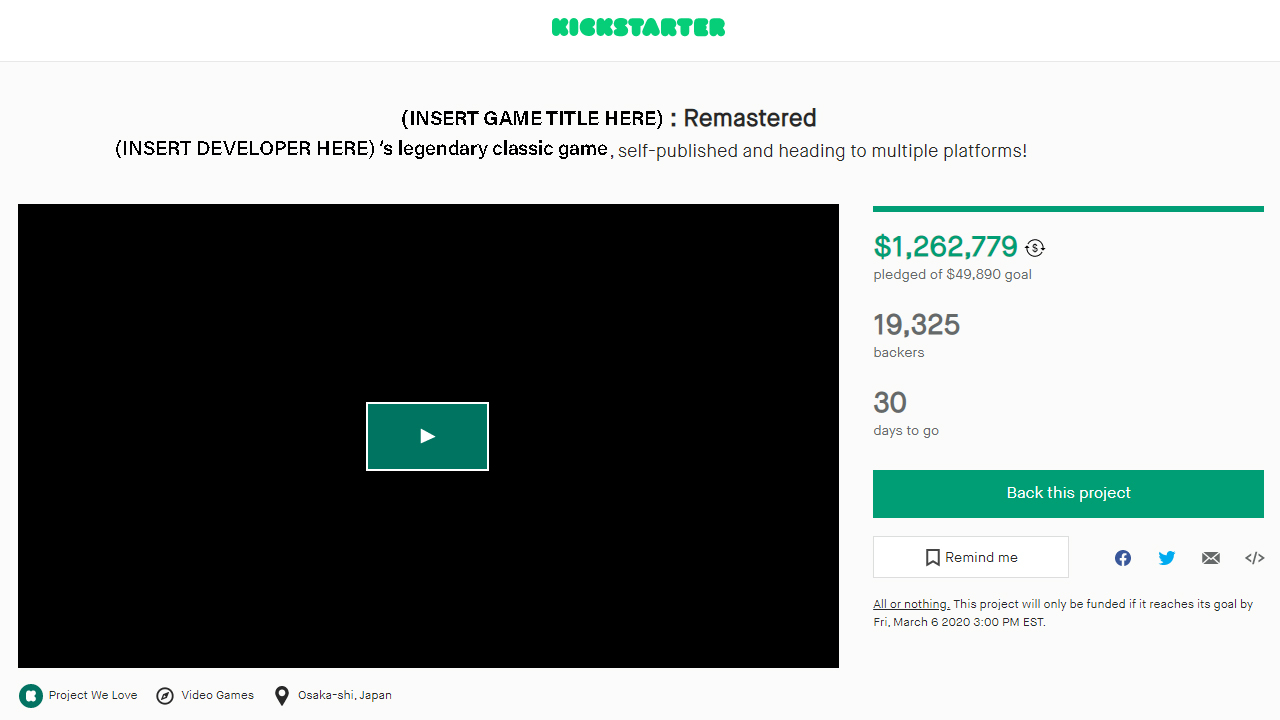 While it launched just over a week ago, it took less than 24 hours for Platinum Games’ Wonderful 101 Remastered Kickstarter campaign to hit the 1.5 million mark. Needless to say, it’s been a success on the crowdfunding platform and for fans that have been waiting for this cult classic action game to return.

If I was a betting man, I would put my money on more developers following in Platinum’s shoes by going to Kickstarter to fund prospective port projects of smaller games with a devoted fanbase. Here is a list of some games that I’d like to see get a similar treatment.

Camelot has a number of strong contenders that I would love to see get the port/remaster treatment. While the Golden Sun series is near and dear to my heart, I think the series that has a better fit in the Kickstarter space would be Shining Force. At the time, this series was SEGA’s answer to Fire Emblem–which is their take on the tactical grid-based fantasy RPG–and the series has had a lot of representation on various SEGA collections over the years.

Much like Trials of Mana though, we’ve been missing a game. North America and Europe only ever got the first scenario out of three of Shining Force 3. We’ve never had an official ending to the original Shining Force series, and it’s a shame. A nice remastered port collection of Shining Force 1-3, with the inclusion of the missing chapters, would be a dream come true. If Camelot were to launch a Kickstarter to fund this endeavor, I have zero doubt that it would be funded that day.

It wasn’t that long ago that Katsuhiro Harada revealed that an HD remaster of the Xenosaga Trilogy was under consideration. Deemed that it wouldn’t be profitable, Bandai Namco decided not to pursue work on the project, much to the sadness of fans. If the marketing analysis says that it wouldn’t be profitable, taking a remastered version of the series to Kickstarter would be the perfect solution. Let fans of the series upfront some of the cost, and speak with their wallets that we need Shion, KOS-MOS, and crew in HD.

Developed by Tri-Crescendo, this game places you in the fevered dreams of Frederic Chopin as he lays on his deathbed. Filled with riffs and musical puns-a-plenty, this action RPG on the Xbox 360 and PlayStation 3 is bright and vibrant; a stark contrast to the dark and macabre predicament you find Chopin in. Tri-Crescendo isn’t the largest studio and with the shaking reception of their previous Star Ocean title, taking to Kickstarter to fund a remastered port of Sonata would be perfect. It’s a fantastic title and would look beautiful on Switch or PS4/Xbox One.

This gothic turn-based RPG was an intriguing addition to the PlayStation 2 library. As sequels to the Koudelka series on PS1, the first two games were published in North America by the now-shuttered Midway with the final game, Shadow Hearts: Into the New World, by XSEED. Combat incorporated a spinning wheel that, depending on where you stopped on the wheel, would decide if you hit, missed, or landed a critical. A criminally underrated series with yet another passionate following, releasing a remastered port or collection would be a lovely breath of fresh air in the growing RPG space. XSEED, get on that Kickstarter and start this project, please!

If Platinum can get the rights back from Capcom for Hideki Kamiya’s first Sentai-esque title, Viewtiful Joe, the results would prove equally as successful. The fast-paced beat-em-up gameplay of the first two Viewtiful games are two of my favorite titles on my GameCube. The cel-shaded art made the various cinema genre-themed levels really pop and stand out. As a long time Power Rangers/Super Sentai fan, Viewtiful Joe‘s spandex-clad hero theme spoke to me. Sharing a lot of similarities with the world of Wonderful 101 makes this an easy pick.

As Obsidian Entertainment’s buggy-yet-brilliant spy RPG, this darling would be perfect for the Kickstarter port treatment. Obsidian has mentioned previously that they would like to get back into the spy game before, but it hasn’t worked out. While the bugs and some gameplay quirks held Alpha Protocol back in the eyes of mainstream players, this game has a passionate following; myself included.

I know that with being owned by Microsoft now, they may have additional resources that could make a remastered port more feasible. But to take the risk, perhaps MS would need more assurance to green-light the project, which would make Kickstarter a perfect option: capital and clear display of the desire for the project, straight from the fans.

Putting aside the constant speculation that Demon’s Souls may be getting remade/remastered anyway, let’s assume for the sake of argument that it isn’t. This little game, which at the time the industry thought couldn’t succeed with its extreme difficulty, would go on to start a brand new genre of games, with Dark Souls, Bloodborne, Sekiro, and more following in its footsteps. It’s a tragedy that this first title hasn’t gotten a similar remaster treatment that its predecessors have. If FromSoftware wanted to hedge its bets on publishing costs, the Kickstarter route could be a good way to go.

3D Dot Game Heroes is a fantastic game that has long since faded into obscurity. This not-Zelda title from FromSoftware and Silicon Studio put you in the shoes of the legendary hero’s ancestor, on a quest to reclaim magic items to banish the big bad. The world map, dungeons, and its structure were basically a re-imagining of the original Zelda on NES. What made it really unique was the fact that you could create your own blocky avatar to explore the world, using the game’s character creator.

The unique visuals along with a tried-and-true gameplay formula make 3D Dot Game Heroes a game that would do fantastic on modern platforms, especially the Switch. As a smaller, more obscure title published overseas by Atlus, the only way I could see this getting a remastered port is with the Kickstarter approach, and allowing players to show the developers that the interest is there to revive it.

To put it simply, White Knight Chronicles is Xenoblade Chronicles X in a high fantasy setting, which came out five years before X did. Giant sprawling world: check. MMO-like combat where positioning matters a lot with your special moves: check. Custom character creation and tons of weapons and skills: check too. Giant magical robot knights, you can pilot: yep! There is already a demand for a Switch port of XCX, and I imagine that Level 5 could find success with an enhanced port and remaster of this series, leading hopefully to a full-on revival.

Are we witnessing a brand new age of crowd-funded ports of old gems? I wouldn’t be against it. Nowadays, vocal fans constantly tweet at and ask the developers to port and remaster old games. There are worse ideas than tying such a project to a Kickstarter: let the fans speak with their wallets and help it get funded. Doing so would not only secure additional funding, but also make for a stronger pitch to executives. If it doesn’t meet the Kickstarter goal, it’s no loss (or at least not a significant one) on the company’s bottom line. Regardless if others follow suit, I’m excited that one of my favorite Wii U games is finally coming back. I just hope it means that we might get even more of them if it succeeds.

The post 9 Games That Developers Should Launch Porting Projects For On Kickstarter by Scott White appeared first on DualShockers.

Second Official Yacht Club Games Presents Airing Next Wednesday
Jedi: Fallen Order Could Have Been Delayed but Respawn “Wanted to Hit a Date”
The Latest FIFA 20 Promo Might Be the Worst One Yet
Nintendo Switch Lite Coral Edition Will Launch in the West This April
Super Robot Wars OG: Seems we Might Wait a While Till the Next Game